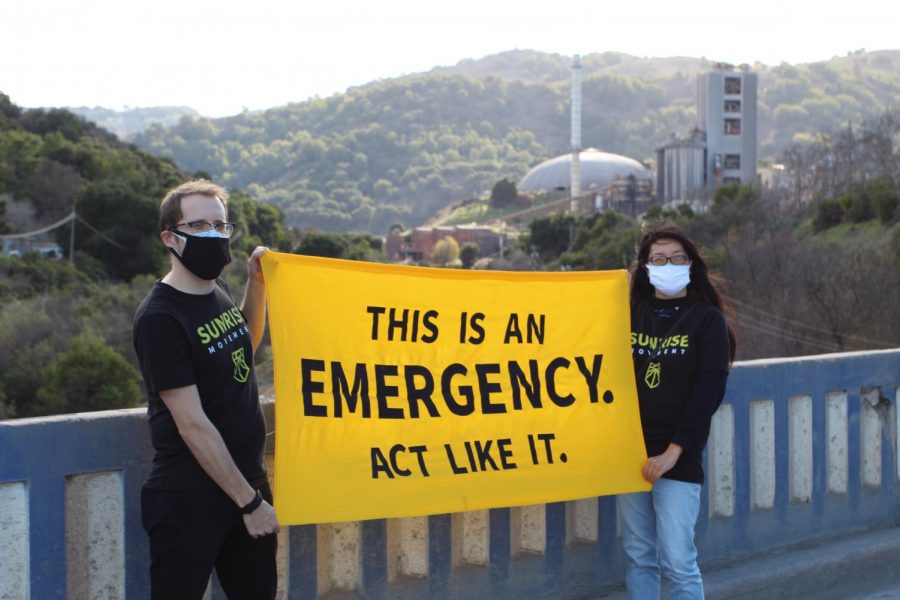 Members of Sunrise Silicon Valley support the national Sunrise Movement’s sit-in against the implementation of Mountain Valley Pipeline through Virginia and West Virginia. The local hub helps youth around the Bay Area find their voices and protest for immediate climate action.

Fighting for climate action is an all-encompassing effort for the over 200 students in Sunrise Silicon Valley, a youth-led Bay Area hub of the national Sunrise Movement. Refusing to stay idle, members have organized and continued to push for reform by striking, writing op-eds and advocating for progressive environmental legislation.

During the 2020 election season, the group of young individuals collectively made over 35,000 phone banking calls to voters nationally to help elect officials who presented progressive climate change platforms.

“I was so proud of our hub after the election season,” Co-Leader of the Committee of Justice Aditi Anand said. “It’s not a stretch to say we played a huge part in some of those legislative campaigns. Those are the moments which made me feel so proud that we are making a difference.”

On top of electoral efforts, Sunrise Silicon Valley regularly organizes socially-distant protests against the construction of pipelines and other environmental issues while rallying the support of local youth. In pursuit of unifying young leaders, the hub merged with other local Sunrise groups to organize the Wide Awake Protest in September 2020. The demonstration, located outside San Jose Mayor Sam Liccardo’s home, pushed Bay Area politicians to take direct action such as passing progressive legislation for the November 2020 election, sending a “wake-up” call to politicians.

Currently, the hub continues to virtually advocate against the Mountain Valley Pipeline project, while supporting the national Sunrise Movement’s sit-ins on the land in opposition of its implementation. The project plans to construct a natural gas pipeline system from northwestern West Virginia to southern Virginia. It is said to disturb approximately 4,189 acres of severe water erosion soils, destroying 2,353 acres of statewide farmland, according to Sunrise Silicon Valley.

Through each of its initiatives, the hub’s main mission is to equip members with the communication skills necessary to create an individual impact within the movement. Their regularly held public speaking and anti-oppression storytelling workshops help members learn how to effectively advocate for environmental issues when working with others.

“It means a lot to me that we are all still here spending time together and working on this cause because we care about having a liberal future,” Hub Coordinator Helen Deng said. “We all want to make a difference, even if it’s small and not tangible yet. It’s very inspiring that we’re in this fight together and that we’re still here [making an impact] no matter how tired we get and how daunting everything can be.”