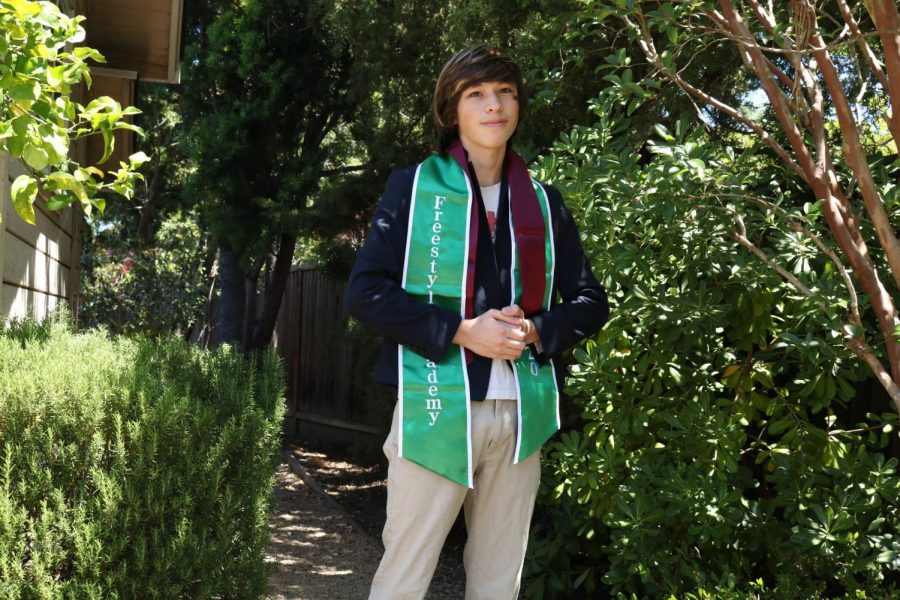 Sean Li, ’20, is posing with his Freestyle Academy of Communication Arts & Technology banner upon high school graduation. Li starts at the University of California, Santa Cruz as a freshman this fall and is excited to begin his path into engineering off-campus.

In November of his senior year, Sean Li, ’20, only applied to two universities: University of California, Santa Cruz (UC Santa Cruz) and University of California, Santa Barbara. He based this unconventional decision on his extensive research about its student community, campus and academic programs. Aside from the educational opportunities, he was drawn to UC Santa Cruz’s small size and its emphasis on the campus’s natural surroundings.

“The camp got me very invested in engineering because I got the chance to code a machine to do a certain task such as lighting up an LED light, increasing and decreasing volume or spelling a message,” Li said. “These projects focused on two of my favorite things: working with my hands and problem-solving.”

With his passion in mind, Li was excited to dive right into studying the subject and developing his expertise. UC Santa Cruz offers incoming freshmen the option to take a gap year, yet Li opted to begin his university experience this fall even if it was ultimately from home.

“I can understand taking gap years; it makes sense, especially during these times,” Li said. “It didn’t make sense in my case since I feel confident enough about what I’m doing and what I’m getting into.”

UC Santa Cruz also gave students the option to reside in the dorms on campus where they would have to attend class virtually.

“I was on the fence, but I decided not to go because I’d rather be close to my family,” Li said. “If I’m not going to be in classes, I’d rather be here in someplace I’m comfortable. I’m close to my friends and a place that I know.”

He hopes that given the university’s small size, it will make transitioning back to in-person learning much easier with fewer students to account for. Based on a number of informative emails he’s received from the administration and his virtual orientation, Li believes that the university is handling COVID-19 well.

“In terms of the campus and classes, UC Santa Cruz is working to make sure that there’s a very small risk of actually contracting the coronavirus and being sick because they do want people to come back, but they also prioritize the students’ health,” Li said.

Since starting his classes on Thursday, October 1, Li has experienced the challenges of attending university virtually. While he’s now adapted to new educational platforms such as Canvas, Li initially found it challenging to navigate the various sites and instructions that came with each class. An additional downside he found to distance learning is the lack of human interaction that is usually expected in classes.

“It’s unfortunate that we have to use these formats because they’re very inefficient at fostering relationships,” Li said. “A person’s tone and personality are completely lost over text discussions, and people barely speak when they have to. You don’t really get to make connections with anyone.”

Despite a rocky and somewhat isolating start to the school year at home, Li continues to see university as a good opportunity to get invested in the community and begin building his future.

“I am really looking forward to being on campus, having great experiences, being more independent and making more connections when the time comes,” Li said.