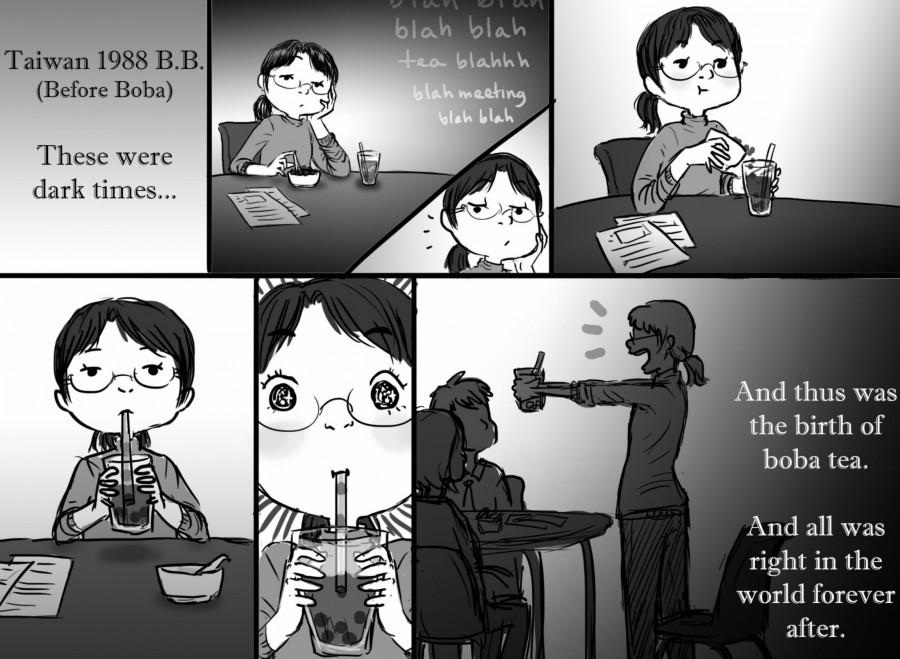 Pearl milk tea: everything you need to know

The Rise of PMT

Pearl milk tea is a rapidly expanding trend in the Bay Area and around the world, and it does not look like it will be gone anytime soon. More and more pearl tea shops are appearing in the form of both chains stores and individually owned shops. While only fifteen years ago these shops were almost exclusively found in neighborhoods densely populated by Asian Americans, they can now be found anywhere, especially within the Bay Area, as more people discover this fresh new beverage.

The appeal of pearl tea is widespread because there is something to appeal to all levels of tea enthusiasts. Beginners who are just looking to try something new can have one of the sweeter tea options, with added sugar and flavorings, while more hardcore tea drinkers can order a more traditional pearl tea. This ability to attract a variety of customers allows the pearl tea trend to continue expanding.

With the growth of the pearl tea industry, various shops are experimenting with new ways to distinguish themselves from a basic pearl tea shop. With different flavors, toppings and even types of tea, the uniqueness of each store lends itself to a special experience at each shop.

With the sweet taste and great variety of pearl teas, what started as a mere trend could grow to join ice cream at the top of the sweet treat industry. The Talon looks into everything you need to know about this growing phenomenon in the Bay Area.

Taiwan, 1988. Schoolchildren buy plain, milky tea after school before walking home. Across the city, stuck in a boring meeting, an adventurous tea shop worker named Lin Hsiu Hui poured fen yuan (sweetened tapioca pudding) into Assam iced tea. From then on, the after-school snack was destined to be a success, spreading like wildfire across the globe.

The name “bubble tea” was in use far before the invention of the tapioca-filled tea. The tea that schoolchildren bought was often mixed with milk and sweet, fruit-flavored powders. In order to mix the powder in properly, the tea would be vigorously shaken, creating a bubbly foam in the vacuum-sealed tea. These bubbles earned the tea the name “bubble tea.” The new innovation of adding tapioca pearls to the tea only enhanced the meaning of the name, as well as helping new terms spark up such as “tapioca tea,” “boba tea” or the currently most popular, “pearl milk tea.”

As it rapidly became trendy in Taiwan, the sweet pearl milk tea hopped over the sea to neighboring countries such as China, South Korea and Japan before spilling all over the world.

Until recently, pearl milk tea has stayed under the radar in America, before it suddenly exploded in popularity around the early 2000s. With its distinctly rich and smooth taste, the tea’s fame began when drinkers were presented with a large range of toppings. Nowadays, some of the more popular toppings include egg puddings, fruit jelly cubes and syrup-filled pearls called “popping boba,” but none of them exceed the popularity of the classic black honey boba.

Much like the international staple of various Starbucks frappuccinos and other sugary beverages, pearl milk tea has recently claimed a special place for people of all ages. The drink truly became popular when people started raving about numerous tea shops on review sites such as Yelp. Since then, bubble tea has taken the world by storm and continues to increase in popularity with its myriad toppings and flavors. From its hometown of Taiwan, to Europe, to our own Bay area, numerous tea shops strive to take the once accidental drink to the next level of tea enthusiasts.

How PMT is Made

Pearl milk tea (PMT), bubble tea, or milk tea has become a worldwide phenomenon, rapidly growing in the last few years. This drink originated in the 1980s as a Taiwanese black tea mixed with chewy tapioca pearls, condensed milk and sugar syrup. Since then, PMT has made its way to the United States and expanded to countless different recipes and variations through cheaper, economical versions, as well as American twists on a Taiwanese classic.

The most notable part of the drink isn’t so much the tea as the tapioca pearls, also known as boba. They are made from cassava, a kind of starchy root, made into flour. Using a technique of South American descent, boba makers strain the root’s starch under pressure to create the pearls.

The basis for the milk tea itself is typically either black, green or oolong tea, but some variations use coffee as well. The process of PMT-making has grown into a wide-ranging industry in which different shops have their own specialty for making pearl milk tea, usually involving powders, fruit juices and syrups blended together. The tea is meant to be enjoyed a few hours after its making.

See the graphic above for recipe instructions.

Ranging from original Taiwanese style to creamy Vietnamese fashion, boba tea has stayed put in Asian history for a couple decades now and may do so in the rest of the world for years to come. Below, The Talon features selected local milk tea shops that are worth the current hype.

For years, Los Altans who craved PMT, but were too lazy to drive out to Mountain View for Tea Era or Cupertino for Fantasia, had to settle for the unsatisfying concoctions from the Posh Bagel and Miyo in downtown. Luckily, the well-anticipated Teaspoon opened in spring 2015 to the delight of boba-lovers and non-converts alike. Teaspoon, while pricier in comparison to chains like Tapioca Express or Quickly, features several specialty drinks for a more flavorful taste and the classic milk tea flavors such as assam, jasmine and Thai tea. Other factors customers can adjust to their liking include sweetness, milk and temperature. Toppings include two types of boba (pearls), fruit jellies, popping boba and crema, an unique ingredient that transforms any drink into a smooth, milkier texture. A downside to Teaspoon is that it only offers one cup size, which may be too much for some customers.

The Roasted Oolong and Rose Petal Cremas are two outstanding, flavorful drinks on Teaspoon’s menu. They pair well with either honey boba or grass jelly. For a fruitier palate, try the Virgin Mojito in Peach or the Grapefruit Garden.

Tea Era is a tiny boba shop packed onto Castro Street, across from Therapy and West Valley Music. This was originally one of the closest milk tea spots to Los Altos, and thus it has a variety of regulars around the area. Its diverse menu and cheaper prices make it a great choice for boba tea newbies or those who are on a budget but still want a decent drink. Tea Era fairly represents the typical Taiwanese-style milk tea shop; its menu even has Chinese translations. The black boba is Tea Era’s best point because it is subtly sweet, perfectly soft through the core, and a harmonious pair with any tea on the menu.

The jasmine green milk tea evokes a mild fragrance that still shows through under the sweet black boba and milk. Jasmine, or any simple black or green tea, always makes a good choice for an everyday, basic drink. On the other hand, the rose black tea is potent enough on its own and paired with black boba. Warning: adding milk may cause headaches.

The Palo Alto Gong Cha opened in early January 2015, providing easier access for Fremont location regulars in the South Bay. Gong Cha offers a small, but authentically Taiwanese menu of teas and coffees. Currently, its specialty is the milk foam topping teas, otherwise known as the “Mustache series.” The foam tastes great either sitting on the tea or mixed in for an overall saltier, creamier concoction. Other distinctive choices include wintermelon tea and ice cream black tea. Because of the two cup sizes, Gong Cha’s price point compares well to its numerous boba shop competitors in Palo Alto and other cities in the area.

The oolong tea, with or without milk, is best at 30 to 50% sweetness and paired with grass (herbal) jelly. Gong Cha’s herbal jelly may taste a tad too medicinal for those not used to the pudding-like topping, but it is an easy alternative to black boba because it is less chewy.

While most milk tea shops only have a couple seats for waiting customers, Verde Tea Cafe is an alternative sit-down style cafe.  You can order boba drinks in glasses and bento meals for either lunch or dinner. Verde provides a wide list of milk teas, iced teas and smoothie freezes that come in numerous fruity and creamy flavors. However, its pearls are subpar to those of competitors like Tea Era often because Verde quality varies day to day; usually, the boba is limp and somewhat soggy. The powder-based “frothy iced milk teas” are still worth a try, but unless you plan on staying for a snack, too, the other boba shops around the area are a better value for your palate and your wallet.

Verde nails the basic pearl milk tea in flavor; often boba shops make the original drink too watery or too milky, leaving no chill for the black tea. The honey milk green tea also hits the spot, but can become a little sickly sweet after half a cup.