The Talon interviewed a few Los Altos alumni who are still attending this school—as teachers. Learn about their stories about returning to Los Altos.

From pro gaming to pro teaching, this man’s talents add up 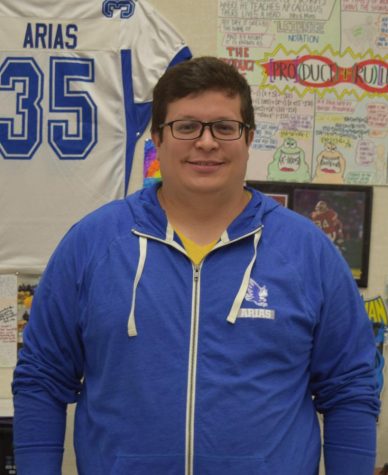 From working in retail to excelling in the pro gaming industry, math teacher Hector Arias is a man of many talents. After graduating high school, he never imagined that he would return to Los Altos and become a teacher.

In math teacher Hector Arias’s classroom hangs a jersey from his time on the football team at Los Altos fourteen years ago. In his senior year, neither Arias nor his teachers expected he would be returning to teach Algebra 2 and AP Statistics.

“I was kind of shocked when he reached out to me last year and said he was going to be applying to work here,” Arias’s former math teacher Teresa Dunlap said. “I knew him as a sophomore when I had him, so to see the growth from his sophomore year in high school till now was amazing.”

Back in high school, Arias had not even considered teaching a career option.

“I didn’t know what I wanted to do,” Arias said. ”One of the biggest changes now is that there’s a lot more support when it comes to colleges and careers.”

Right after high school, Arias worked in retail and out of nowhere found a living in professional gaming.

“This was really at the start of professional gaming,” Arias said. “I was playing a game called Gears of War, and I met with some people who were really good, and we went to a tournament and we won some money. From there it carried on.”

Later, during a transition back to a more conventional career, Arias returned to school at De Anza College and started tutoring, which became a path to a teaching career.

“I wanted to make changes and make sure that students don’t feel lost, always feel welcome, and that they have somewhere to go,” Arias said. “Students need a teacher who is going to help them find solutions to homework, but also solutions to life.”

Hine has his ion returning 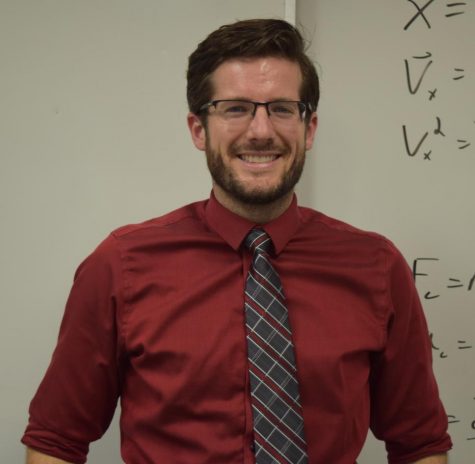 Emily McNally
Physics teacher Stephen Hine returns to Los Altos five years after graduating. Contrary to what some may believe, Hine struggled with physics as a sophomore and never expected that he would become a physics teacher.

Physics teacher Stephen Hine’s hands shook as he frantically attempted to calculate the average velocity of a van full of tomatoes traveling to a small town in New Mexico. Or at least this is how we imagine Hine as a sophomore at Los Altos taking his first Physics course. It’s safe to say that he was struggling.

At the time, it seemed like a daunting task to pass the class. But although his sophomore self would never have expected it, Hine would not only grow to love physics, but also graduate with a bachelor’s degree in the field from the University of California, Santa Barbara. Even later, he would return to Los Altos to teach the subject.

“I loved physics, although it did not come easy to me in my sophomore year,” Hine said. “I definitely had a growth moment my junior year, and was doing better by the end of it. I just loved the content so much, so I decided to take AP Physics C in senior year.”

Hine excelled in physics under teacher Adam Randall. At the end of Hine’s senior year, Randall jokingly suggested that he become a physics teacher, saying that he “was pretty good at explaining things to students.” Five years later, Hine would be back gracing the halls of Los Altos.

When he was finishing his credential program, Hine saw an opening at Los Altos. He interviewed with two of his former teachers, environmental science teacher Greg Stoehr and Randall, and, of course, ended up getting the job. Later, he said that the weirdest part of working with former teachers was calling them by their first names, while the best part was reminiscing about the past.

“Coming in, I felt like I was part of the community already,” Hine said.

Getting that cheddar at Los Altos

Emily McNally
At graduating high school in 1996, Michael Smith has always thought about returning to Los Altos. With no prior teaching experience, Smith was hired and is now one of the most popular teachers at Los Altos.

On campus, there’s no other person aside from English teacher Michael Smith who will replace a final exam with a rap battle to the beat of “I Got 5 On It.”

Smith regards his high school days at Los Altos as some of his best. He was actively engaged in extracurricular activities: he was the Activities Commissioner in ASB, toured South America with the Main Street Singers and won Student of the Year.

“I had a great time here,” Smith said. “This was not a horrible place. I felt like I could do what I wanted to.”

His most positive memory from high school was graduation. Smith was a speaker at his graduation ceremony and jokingly remarked in his speech that he’d return if they were willing to pay him.

But his path back to Los Altos was not an easy one. After high school, Smith attended Morehouse College in Atlanta, Georgia. Smith credits Los Altos for giving him the well-rounded education he wasn’t able to find in Atlanta. He returned to California after a little over a semester and enrolled at Foothill College, pushing the reset button on his education. He then transferred to University of California, Los Angeles, and graduated in 2001. During that summer, he heard about a job opening at Los Altos.

After a couple interviews with no prior teaching experience, Smith found himself at his old high school, this time getting paid to be there—or in his own words, “getting that cheddar.”

“It was a long shot, because I had no teaching experience, but I had a lot of charisma, a lot of knowledge,” Smith said about his hiring process. “I was young and willing to work hard.”

Smith said his high school experience at Los Altos influences the way he teaches now. Since he graduated in 1996, he has noticed that the level of competition and general population of the school has doubled. Los Altos’ academically rigorous atmosphere enables him to push his students to hustle and persevere.

“I’m pushy,” Smith said. “I don’t care. This school sprints, there ain’t no joggers here. But I’m happy to be back. I wouldn’t be here for 19 years if I didn’t love it and if I wasn’t putting it down in a decent way. I love teaching, it’s challenging, but fun every damn day.”