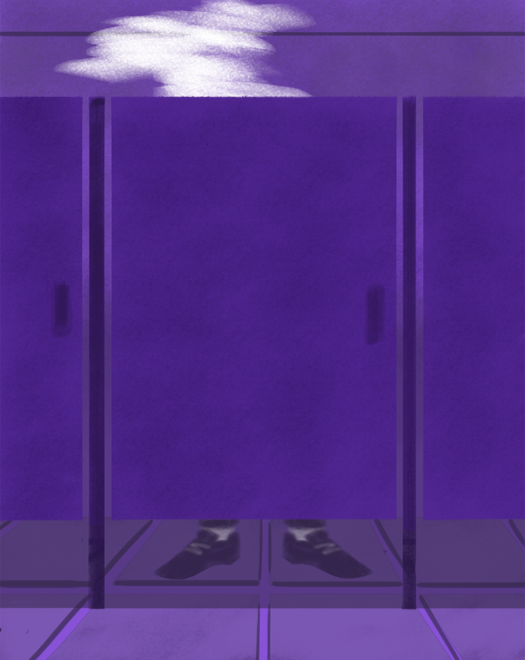 As Twitter user @JerryPressure eloquently puts it, “[The] three phases of 2018 [were] tide pods, Juul pods and airpods.” While Juul pods may not have been the unhealthiest pod of 2018, it certainly was one of the most popular. Juuls are one of the many varieties of e-cigarettes that have not only infiltrated the nicotine industry, but also high schools all over the US. The number of teenagers who vape has soared from 11.7% in 2017 to 20% in 2018. And as a high school in the Bay Area with a high-pressure environment, Los Altos is far from immune to what Food and Drug (FDA) Commissioner Scott Gottlieb calls “an epidemic of e-cigarette use among teenagers.”

The Talon takes a closer look at how the recent rise in teenage vaping has affected the Los Altos community. The school data in this article is based on an anonymous survey and student interviews conducted by The Talon. 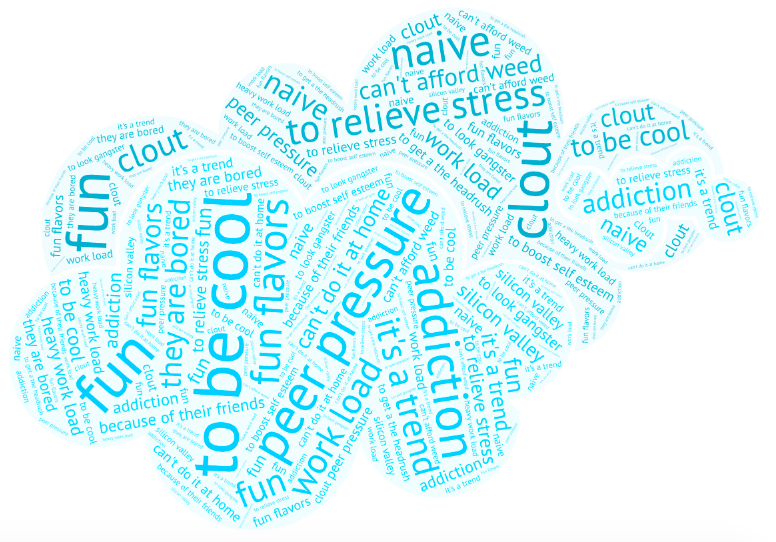 As students walk into the bathrooms at Los Altos High School, they may notice one bathroom stall that’s different from the rest. They might see more than one pair of shoes under the stall door, and a wispy, fruity-flavored cloud hovering at the ceiling. For many, it has almost become the norm to see people juuling in the bathroom.

Many adults and even students believe that vaping is especially problematic among high schools across the Bay Area. With the competitive atmosphere and immense pressure at school, students often turn to vaping as an outlet for relieving their stress.

“School is overwhelming,” an anonymous student said. “Students have to worry about grades since their life depends on them and the workload is way too much for teenagers to keep a healthy social life outside of school. We want to explore our youth, not waste it away devoting ourselves to working prematurely. I think people vape in order to feel some freedom and control aside from school stress and grades.”

At a first glance, vaping may seem to be a safer alternative to cigarettes. However, many teens are unaware of the fact that it is easy to get addicted to these nicotine-containing products.

“I would say [people vape] because of a lack of parental guidance, societal pressure, and because they don’t know how harmful it can be to them,” an anonymous student said. “It has a euphoric effect, so if they’re under-educated on vaping before high school, they’re likely to ignore later warnings from teachers and health class [because] those who smoke or vape or drink place the feeling of the substances at a higher standard than the health risks.”

Many students also turn to vaping because they can do it more frequently as opposed to other drugs.

“The effects of a headrush don’t last that long,” an anonymous student said. “It’s not like alcohol [or] weed where when you’re high you’re impaired and you can’t do anything, so you [can] still do it all the time.”

Some students even do it in class when teachers are not looking since they have easy access to it. They feel that it helps relieve their boredom and stress.

“Just because it’s there [people] will hit it,” an anonymous student said. “I think it’s more because they have it and they can do it so they will do it. When you drink you [get] drunk and when you smoke you get high, but with juuling, you’re still pretty sober, conscious and aware. It doesn’t last that long so you can also drive. You start to do that more and drink and smoke less.”

Despite vaping being a relatively common activity— over half of the students who answered The Talon’s recent survey reported witnessing their peers vaping on campus— many students feel conflicted about whether they should report other vapers or not. This lack of transparency and openness may affect the culture and environment at Los Altos.

“Kids feel like they need to hide something or cover [up] for people, [and that] just makes everyone feel uncomfortable in some way [or] shape,” history teacher Kelly Coble said.

The Next Generation of Nicoteens

Juuls are popular among teens because of their inconspicuous and compact design, making them easy to pass off as USBs which can be hidden from teachers and parents. However, more than their sleek design, many critics claim that the flavors are what draw teenagers in. JUUL Labs, the creator of Juul e-cigarettes, is currently facing four lawsuits and undergoing an investigation by the FDA that will determine whether or not the company purposefully targeted teenagers in their ads and by using flavors such as cool mint, crème brûlée, fruit medley and cool cucumber.

According to government data reported by The Washington Post, about one-third of high schoolers in 2017 said the flavors were a big factor in their choice. In November 2018, the FDA banned JUUL Labs from selling vape flavors in stores except for menthol, mint and tobacco. With flavored pods being pulled from shelves, many of the popular flavors are now sold by other companies at higher prices.

“Flavors make [vaping] seem more fun and taste good,” an anonymous student said. “A fruity flavor seems less harm[ful] than a flavor with the name of tobacco or menthol.”

You eliminate one and there’ll just be something else you can go to. There’s so many options and you can’t get rid of them all. It’s like a hydra—you cut off one and two more grow.”

While Juuls and other e-cigarettes are generally considered healthier than cigarettes, there are still concerns about them. Since vaping devices are new to the market, no long term studies have been done to investigate the long-term effects of continued usage. In an attempt to help minimize adult smoking, the FDA delayed regulations on e-cigarettes, exempting manufacturers of e-cigarettes from premarket review until 2022, in July 2018. However, this decision backfired, as Juuls and other e-cigarettes are now normalizing teenage nicotine consumption.

Although JUUL Labs may be attempting to limit their teenage users by pulling flavored pods from retail stores and eliminating their social media presence, there are several other e-cigarette companies that teens can turn to. Some, such as KandyPens, are very obviously marketed to teens and prominently feature celebrities such as Amber Rose, A$AP Rocky and DJ Khaled.

“You eliminate one and there’ll just be something else you can go to,” an anonymous student said. “There’s so many options and you can’t get rid of them all. It’s like a hydra—you cut off one and two more grow.”

Los Altos’ administration has been searching for solutions to tackle the vaping problem. With so many vapers, it’s almost impossible to track down all of them. This school year, there were two vaping incidents that set off the fire and smoke alarm system at Los Altos, causing schoolwide evacuations. The administration is looking into setting up sensors that would detect vape in enclosed spaces, such as the bathrooms.

As more and more students at Los Altos take up vaping, it seems that students are not as willing to turn a blind eye to vapers on campus. Most of the reports made to student conduct liaisons Julie Corzine and Seth Tasman come from students themselves, not staff.

“It used to be [that], 99 percent of the time, if we had a student who was [caught] under the influence of marijuana, it’s because they smelled like marijuana and the teacher would notice it,” assistant principal Galen Rosenberg said. “That’s almost disappeared now. But [with] the vaping, [it’s] almost always students [who] are reporting it.”

I spend more time not in class when I need to use the restroom. My valuable learning time is being taken away because of other people’s bad decisions, so fix the people doing it, rather than sacrificing hundreds of innocent students’ class time.”

“It’s kind of gone back to the olden days of smoking in the bathrooms,” Rosenberg said. “I think there’s a fair [amount] of students that are either made uncomfortable or feel it’s just not cool so they’ll [report them to us].”

One of the most popular locations on campus for student vapers is the 900 wing bathrooms presumably because of its seclusion and distance from the administration building. Since the start of November 2018, the 900 wing bathrooms have been regulated and closed during lunch, after school and sometimes during class. Contrary to popular belief, the bathrooms were not closed because of student vapers ‘hotboxing’ the bathrooms but rather because of groups of students who were play-fighting. As a result, some students have expressed concerns about having to miss large amounts of class while walking to bathrooms that are far from their classroom building.

“I spend more time not in class when I need to use the restroom,” an anonymous student said. “My valuable learning time is being taken away because of other people’s bad decisions, so fix the people doing it, rather than sacrificing hundreds of innocent students class time.”

Vaping is a pervasive and widely debated issue for many schools in the area, exacerbated by how difficult it is to measure and regulate. While vaping continues to affect Los Altos, the administration is considering multiple solutions to the issue.