If you met me two years ago, you would’ve found a girl hopelessly trying to scramble for a “cool girl” image and a nonchalant-ness that only made her a watered-down version of herself.

Growing up, I would watch the usual fare of kids programming and in each show, assaulted by images of the mean, popular girls in pink mini-skirts, done-up hair and glossy lips. On the other side was our hero: the girl who didn’t care about the clothes she wore or the makeup she put on. In the end, she was always the one that won.

I had to be Selena Gomez in “Another Cinderella Story,” with her giant cargo pants and horrendously long shirts. Selena didn’t care about how she looked, and she got to date the pop star. So maybe that’s how I was supposed to be.

What followed were years of carefully constructed indifference toward my appearance, ripe with ill-fitting graphic tees and nasty yoga pants and the belief that this constant discomfort would make me desirable. All it did, though, was present an image of a lukewarm girl.

By the age of thirteen I was tired of putting on this show of passivity. I was done changing my image to become someone who didn’t care about their image. I began to tentatively venture into a world I call: Wearing Clothes That Make Me Feel Pretty.

I was done changing my image to become someone who didn’t care about their image. ”

After six years of looking like a human trash bag it was easy for me to slip back into old habits: both because of the familiarity of the space I was in and the fear of kids who had known me since kindergarten calling attention to this change in the Cathy Brand. But when I moved here from the conservative and painfully white Kansas in July 2016, I was confronted by a place that was a stranger to me. Nobody knew me, so there were no pre-conceptions of the serious, apathetic Asian girl. I could become someone new.

The change was gradual and difficult. Before I knew it, I was the loud and talkative friend who wore dresses as often as they could and lived for the calm routine of putting on makeup. I’ve come to relish in the feeling of putting together an outfit and presenting to the world an image of the Cathy that I am now and always want to be — someone confident and someone ecstatic at the opportunity to wear a bright, yellow crop top.

I’ve come to find that fashion has become a way for me to show the progress I’ve made in growing up.”

Fashion can be chalked up to be a silly thing, especially when you look at arguments about male rompers or the monotony of the “who are you wearing” question on the red carpet. All of that, though, can’t discredit the confidence and security I feel in a nice outfit. It’s not just me, many going through tumultuous times like high school can gain some positivity from fashion.

I’ve come to find that fashion has become a way for me to show the progress I’ve made in growing up. I dress for myself and I love me and every bit of my happy, ‘trendy teen clothes, cares too much’ wardrobe. 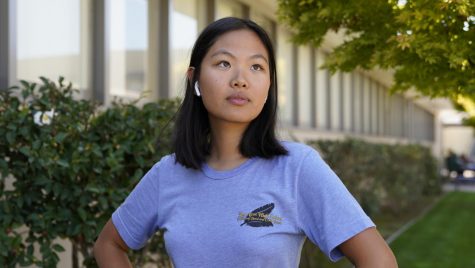