“Alex, I’m counting on you to cure me,” joked junior Alex Guh-Siesel’s little sister, Lauren Guh-Siesel, after he had mentioned that he was thinking about researching celiac disease. She was diagnosed with celiac disease three years ago and it has since dramatically impacted her lifestyle. A year later in the Advanced Science Investigation (ASI) class, Alex is working to synthesize a treatment that could potentially address the limitations of celiac disease.

Alex has always been interested in helping others and conducting scientific research. The ASI class, advised by chemistry teacher Darren Dressen, is the confluence of these two passions.

ASI allows students to pursue independent scientific research in a field of their choice, building up to the Synopsys Science Fair at the end of the year, a science competition that showcases the research projects of local 6th through 12th graders. The flexibility and resources provided by this class have given Alex the opportunity to explore his passion for chemistry and science at large. Alex embarked on a year-long science adventure to develop a possible treatment for celiac disease and, ultimately, to help others.

Celiac disease is an autoimmune disorder where one’s body mistakenly identifies gluten as a foreign disease-causing particle. This leads to abdominal pain and other medical complications. Current treatments focus on prevention through a strict gluten-free diet.

“For example, whenever we go to a restaurant and my sister wants a burger, we have to ask them to clean the stove before they put the burger on,” recalls Alex. “[That’s] because there’s possible cross contamination from gluten, which is just wheat, so, bread.”

Having seen the impacts and complications of celiac disease, Alex was motivated to pursue the disease as a research topic. ASI was a great opportunity to apply what he learned in biology and chemistry to real life, all while helping a large body of people and having fun doing research. 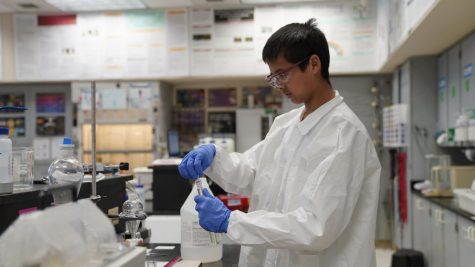 Alex came up with the idea to synthesize a small molecule by reading countless articles. If this molecule shows promising results, it would be implemented as a daily pill. Once the small molecule reaches the patient’s small intestine, it would bind to the receptors for a day, allowing the patient to consume gluten without any complications.

To build this molecule from scratch, Alex designed a synthesis flow chart, where each step modified or built onto the molecule. Determining the first reaction of the synthesis process took two to three months. Afterward, he was able to conduct and verify the last three reactions in a similar two to three month period. Currently, Alex is on his sixth step, and is continuing to carry out the last step of synthesis.

Alex also took an organic chemistry class at Foothill College, which not only taught him crucial laboratory techniques and procedures, but also gave him general background knowledge on chemical synthesis. By understanding why and how reactions function, Alex can maximize the efficiency of his own reactions in the lab.

“The class has taught me to think like an organic chemist, which has allowed me to develop synthesis flow-charts… and has allowed me to have an innate understanding of what next steps need to be taken,” Alex said.

This past March, Alex presented his research at the Synopsys Science Fair. Competing against more than 850 projects from 1,000 students across the Bay Area, Alex won first place in the Physical Science and Engineering Category. He also won the American Chemical Society First Place Award from the Silicon Valley Section. He is also moving on to the statewide California Science & Engineering Fair in late April.

“The fair was a really good experience,” Alex said. “[I liked how I was] able to present my work as well as discuss my work with these researchers and other people with scientific backgrounds and talk to them about what

Even with the numerous awards and frequent presentations, Alex’s research does not stop. Adding on to his experimentation, Alex hopes to continue synthesizing and perfecting the small molecule next year as a senior in ASI.

It feels rewarding to be able to conduct a project that has the potential to help so many, Alex says.

“I learned that research is a process,” Alex said. “It takes time. It’s a process where you’re continually researching the same topic, towards a working goal. And my case, I’m treating celiac or potentially curing celiac…. it’s just been a really fun experience, and one that I plan to continue next year.”

While computer programming and biology seemingly have nothing in common, seniors Sidd Iyer and Krithika Nathamuni created an ASI project that is centered around using biology as a basis for an entire GPS algorithm.

Sidd and Krithika’s project is based on a slime mold –  a relatively small, almost 2-D organism made of branch-like veins that extend out from its body. The slime mold is brainless, but has special pathfinding abilities that allow it to navigate through mazes to find food. The question of how, exactly, a brainless organism can do this is what made the slime so appealing to Sidd and Krithika. Their research began on YouTube, where they watched videos displaying the slime mold’s capabilities. After a week, they decided to use the slime as the basis for a GPS algorithm that Sidd would code.

The slime mold had several characteristics that made it a perfect model for the flow of traffic. Firstly, out of multiple possible paths, it will choose the most efficient one. Not only is it able to navigate towards food, but it will optimize its route. For example, when place on a raised geographic map of the US with food at all major cities, the pathways the slime maps are nearly identical to the US highway interstate system.

“That’s really interesting, because the slime mold, which is a brainless organism, figured out what took us maybe 20 or 50 years and millions of people to create,” Sidd said.

The slime is also single-celled, which means there is a lot of volume and not a lot of surface area. Because of this, there are some parts of the cell that need nutrients but are far away from the edge of the cell. To get around this, the slime mold uses tubules to transfer nutrients from the cytoplasm to the nuclei inside. These tubules are able 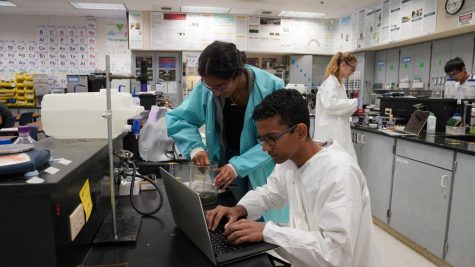 to very accurately represent roads, and the nutrients traveling through them are like traffic.

Sidd was able to code a positive feedback loop into the algorithm, but the jump from biology to code was still difficult, so there were many aspects he had to modify. For example, he included a “utility” function, which helps calculate the efficiency of a route based on traffic speed – an aspect of traffic not represented in the slime mold. Sidd wanted to make sure everything still connected back to the biology – he didn’t want to take an algorithm inspired by slime mold and just change it so that it works.

Ultimately, the advantage of Sidd’s code is that it can constantly update shifts in traffic. Traffic is not static – cars switching lanes, accidents, and unpredictable red lights can all change traffic in an instant. Programs such as Google Maps have to “listen” for changes in traffic to know when to recalculate a route, which can lead to complexities.

Sidd’s algorithm eliminates these complexities because of its basis in an organism that is naturally, constantly changing.

“Our algorithm naturally adapts to changes in traffic; we don’t have to listen for changes,” Sidd said.

Sidd believes the project can be improved indefinitely, but is not sure how much more time he wants to commit to improving the algorithm. That doesn’t mean its unique functionality is decreasing, however. He sees this program or a similar one being tied in to self driving cars in the future that can communicate with each other to optimize traffic.

Whatever the application of the project, both Sidd and Krithika felt that the process of the project taught them just as much as the results.

“You can have a million ideas,” Krithika said. “And only one could work. But you have to be persistent, you have to continuously try different approaches, because there’s not just one way to solve something.”

Junior Kat Nasif is a problem solver. Having always been intrigued and curious about science, Nasif enjoys designing and finds her position as the Robotics strategist and design lead suitable for her unlimited creativity. When offered a spot in the ASI class last year, Nasif decided she’d give it a go and chose to base her project off of a real-world problem she dealt with in the Robotics team.

Nasif started the year researching bionic hands and how she could maneuver them with electrical film. However, after encountering many roadblocks, Nasif decided to work around the challenges and focus on fixing a problem she dealt with in her own life. The problem was that expensive and valuable electrical components were often burnt out due to too much given voltage.

She designed a resistor called a chemo resistor that is made up of polyaniline, a substance that can be converted between an insulating and conductive form. The ability of converting between those two forms is what helps protect electrical components such as LEDs and lights from receiving too much voltage and burning out.

Nasif continued to look online and search for articles other scientists have written about the topic she was researching. During class, she would either be working in the lab, researching at her desk or presenting her project to the class. Most of her research work is done at home, however, especially when she finds herself stuck.

Currently, Nasif is in the research phase but is facing a large problem: polyaniline can only convert between its two forms when submerged in an acid. However, since Nasif designed it to be a resistor, the acid could cause complications in the circuit. Nasif and ASI teacher Darren Dressen are both unsure whether she will be able to continue using polyaniline due to this problem with using acid. 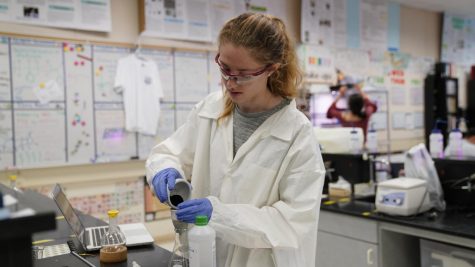 In March, the ASI class presented their projects to judges in the Synopsys science fair. Nasif earned three awards in total, with her first from the University of Toronto, one of the most prestigious awards given out to the participants. She was invited fly there to spend a week on their campus and take a pre-engineering course without any cost. Her second award was from the United States Air Force Commendation, who try to seek out the projects that may best impact the Air Force. Nasif’s last award was from International Business Machines, who granted her $100 and a certificate.

ASI has helped Nasif develop and strengthen core skills she would need to use in the future, such as developing a schedule, planning and dedicating herself to a project. She loves how ASI also allows her to collaborate with her peers and is always curious about what her classmates are working on.

“Before I joined this class, I would have had no idea how to carry something on for a whole year,” Nasif said. “That’s just hard. It’s really hard to keep a project and stick with it. But I think after this class, you learn, okay, if I set my own schedule, and I set my own deadlines, I can do some really great things. Everyone should join.”