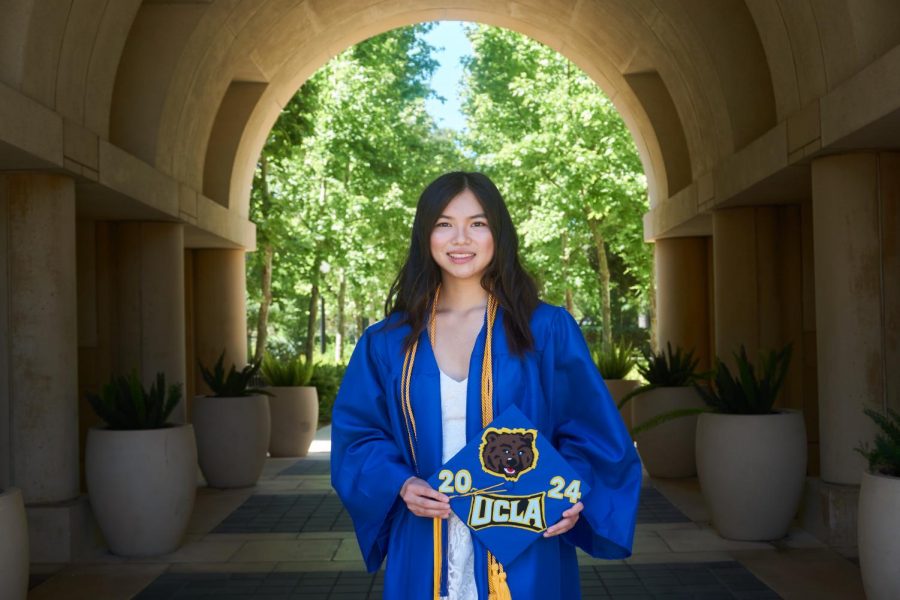 Alyssa Hamamoto, ’20, donned in her graduation gear, is holding her University of California Los Angeles (UCLA) themed cap. Hamamoto, an incoming freshman at UCLA, is taking her courses from home to be close to her family and hopes to major in political science due to her passion for history and political theory.

Even though Alyssa Hamamoto, ’20, felt certain she wanted to attend a University of California, or at least a school in California, she felt bittersweet receiving her letters of acceptance because she was unable to celebrate them with her fellow classmates and friends. Similar to other graduates, Hamamoto felt like the year ended on an odd note once school shut down.

“It was a little strange,” Hamamoto said. “We were getting our acceptances or rejections. At school, we got the chance to talk to our friends about our experiences in person. But when everything closed, it was strange to be opening them on my own and not knowing how everyone else was doing.”

Hamamoto chose to attend the University of California, Los Angeles, and having had two older sisters who attended colleges in California, she remembered how easy it was to visit them. She also took into consideration the affordability of tuition and the courses offered at UCLA.

“I really liked the infrastructure and the academics at UCLA,” Hamamoto said. “I also wanted a bigger city vibe because Los Altos is kind of small and less busy. I thought it would be a good change.”

In high school, Hamamoto found that she was drawn to history, particularly the stories and lessons she can learn from it, and now plans on pursuing a political science major at UCLA. She found a career in government less limiting than in history and appreciated that it would allow her to make an impact on the future.

“I enjoyed my high school history classes and learning about how history shaped the decisions that people made in the past,” Hamamoto said. “Political theory combined those interests, which made me decide to pursue political science. I like how there are so many areas that I can pursue in law, and while I haven’t fully decided on this path yet, it is something that I am very interested in. ”

Despite not getting to meet other students within her major in person, Hamamoto was able to interact with fellow freshmen at orientation virtually. There, she was grouped with others in the same major as her and heard their perspectives on education during the pandemic. Nevertheless, Hamamoto recognized that she, like many of her peers, missed out on an important part of the college experience.

“It’s kind of sad when you think about it,” Hamamoto said. “This is the time where a lot of people would be making new friends and growing up.”

Hamamoto, along with other incoming freshmen, was originally assigned a dorm in mid-July, but her plans changed due to Los Angeles regulations. She currently resides at home until restrictions are lifted. Despite orientation and email updates, not much in-depth information was shared about the upcoming school year, leaving students with unanswered questions.

“I wish they would be more transparent, but I think that the school staff also doesn’t know much about what is going on,” Hamamoto said. “I think they’re doing a pretty good job and have been compliant with all the regulations in each area.”

For Hamamoto, the issue does not so much lie with how the school is reacting to the pandemic but how Los Angeles residents are reacting to it.

“The Los Angeles County has been strict with reopening plans and releasing guidelines that can help control the coronavirus,” Hamamoto said. “The main problem is that many ignore these policies, which has led to continual increases in COVID-19 cases.”

Instruction began on Thursday, October 1, allowing students to get their first taste of distance learning. Hamamoto has had a smooth transition into virtual classes with no major technical difficulties.

“The Zooms can be pretty monotonous at times but I can tell that my professors are also trying their best to transition to online learning and make things as engaging as possible,” Hamamoto said.