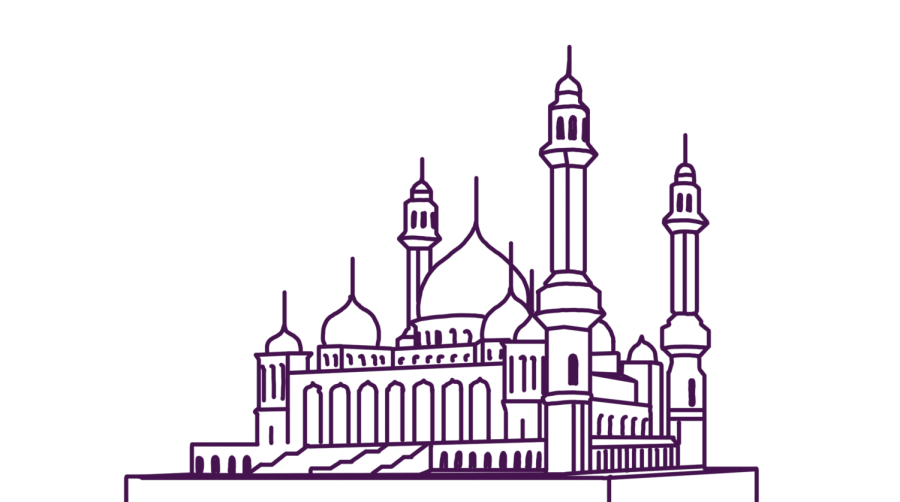 Under the first amendment, students in public schools are guaranteed religious freedom, while the establishment clause prevents schools from imposing a specific religion on their students. But on and off-campus, religious diversity is prevalent, as seen through clubs, places of worship and core values.

Religious communities exist outside of school, through gatherings at places of worship, family traditions and religious organizations.

Junior Cornelia Penn, who is Buddhistm attends a Buddhist temple each month to pray with her family and other Cambodian Buddhists. Sophomore Emma Gourand, who identifies as Catholic, attends church every Sunday with her family. Her mother helped contribute to the development of a local French Catholic community by bringing French priests to help people pray.

Junior Ben Rubinstein is part of Jewish teen movement BBYO’s local chapter, which he describes as his “outlet” to Jewish culture and a driving force in his pride of his Jewish heritage.

“It’s this culture of being a minority and of being oppressed and of trying to find our own cultural identity through that,” Ben said. “Being a part of BBYO means I can connect and keep being Jewish. We see bad things happening to us as a Jewish community when people begin to forget their Judaism.”

At home, Ben speaks Hebrew with his family, participates in religious rituals involving the Torah and attends synagogue approximately once a month. However, he does not believe in God or connect with the spiritual aspects of Judaism.

“I understand Hebrew, and to be able to look at a language and understand what it’s saying and say words that I might not believe in [in synagogue] makes it less appealing to go,” Ben said.

For Ben, joining BBYO allowed him to redefine his way of practicing his religion.

“I’m not praying as much, but it doesn’t mean that I’ve disconnected from my Judaism,” Ben said. “I’ve taken control of the way I want to practice Judaism. Prayer has never been something that I’ve found necessary or helpful to connect to some divine power. I’ve always felt that has come mainly in my ability to do good in the world. Being part of BBYO has been integral to allowing me to stay with those values.”

Senior Rebecca Swernofsky identifies as more culturally than spiritually Jewish. As a result, she doesn’t attend synagogue every weekend although her mother and stepfather do. However, she values the community aspect of Judaism.

“I feel like I’m being left out,” Rebecca said. “I wish I was more of a part of the community, because community is huge. I’m missing out on that whole community aspect where you see the kids learning your values and the older adults there treat you as a grandchild because they’ve known you for years.”

Another reason Rebecca doesn’t attend synagogue is because of the time commitment.

“Community is nice, but it’s a lot of time every week to say prayers,” Rebecca said. “I don’t see myself [attending synagogue] several years down the line. Maybe when I’m really old.”

Not all students are religious. Sophomore Ella Chang attributes her atheist beliefs to growing up in a mainly atheist family.

“I would not join organized religion because I prefer to live without having to follow specific rules on how to be a good person,” Ella said. “I cannot believe in a system where people tell you how to live your life based on a book.”

For junior Joanna Doria, who identifies as an atheist, her lack of religious identification stems from questioning her parent’s’ beliefs. Although her parents do not identify with a specific religion, they believe in the existence of God.

“My parents were always saying how God did this, and God did that,” Joanna said. “But coincidences exist. Science and luck can play into everything. Is there really someone out there watching down at us?”

Freshman Kaavya Butaney, who identifies as agnostic and Hindu, believes in some aspects of Hinduism, such as karma and reincarnation. But other parts of the belief system are “confusing,” including the idea that God is in everyone.

Identifying as atheist can also invite judgement from others. According to Joanna, one common misconception is that atheism is “bad,” and some see it as an incomplete belief system.

“Some people say you don’t have faith, and people shame you for that because they think you need to believe in something,” Joanna said. “But it’s not necessary. Everyone is different, they all have different opinions.”

For freshman Anand Mehta, who identifies as both atheist and Hindu, religious values and atheist beliefs can “coexist.”

“There is ultimately a balance between what we can observe and reasonably conclude and various morals that can be derived from religion,” Anand said. “While I do not believe in the gods that Hinduism preaches, I believe in the values that it teaches. Atheism has taught me to look for the truth and reality in things, instead of simply pointing to a greater deity as the answer.”

Both Joanna and Ella said that religion can be a positive influence in people’s lives.

“Religion is a scapegoat for some people,” Joanna said. “If some bad things are happening, they’ll pray. When you lose all faith in something, it’s nice to have religion as a backup.”

For some students, religion and religious practices help with mindfulness and stress relief, especially in school.

Junior Cornelia Penn, who is Buddhist, meditates daily. She sees meditation as a chance to “express herself” and describes her way of practicing as “freeing.”

“Meditation is a way to escape the stress of daily life, and it’s a way to calm myself when my emotions are getting larger and so big that I can’t control them,” Cornelia said. “It makes me more calm, more understanding of others, and not so quick to judge other people because I know what they’re going through because Buddhism encourages me to self reflect.”

Sophomore Eliza Morgan, who is Buddhist, uses meditation as part of a value system. She initially became Buddhist as a freshman because she was seeking a way to “know what the right thing to do is” without worshipping a deity.

“Buddhism is about letting everything go,” Eliza said. “For instance, if I get a bad grade on a test, it’s not the end of the world, it happened. Meditation has made me a lot more relaxed, to the point where some people get the impression that I don’t care about things, but I’m more focused on the goal than the process.”

For one student who identifies as Mainline Protestant and requested to be anonymous, religion means trusting that “God always has a plan.”

“He may want you to go through some hard times because he wants you to learn from them,” she said. “I always think of that when I’m going through something hard because what I think might be good for me isn’t actually what God wants for me, and His plan is always better.”

Her beliefs have allowed her to manage stress surrounding her grades.

“It’s made me realize that my grades aren’t super important anymore,” she said. “Religion helps ground me. Instead of me going all over the place and yelling and screaming, it sort of prevents me from hurting myself and hurting others. God has planned so much more for me than my grades. He defines me as someone completely different.”