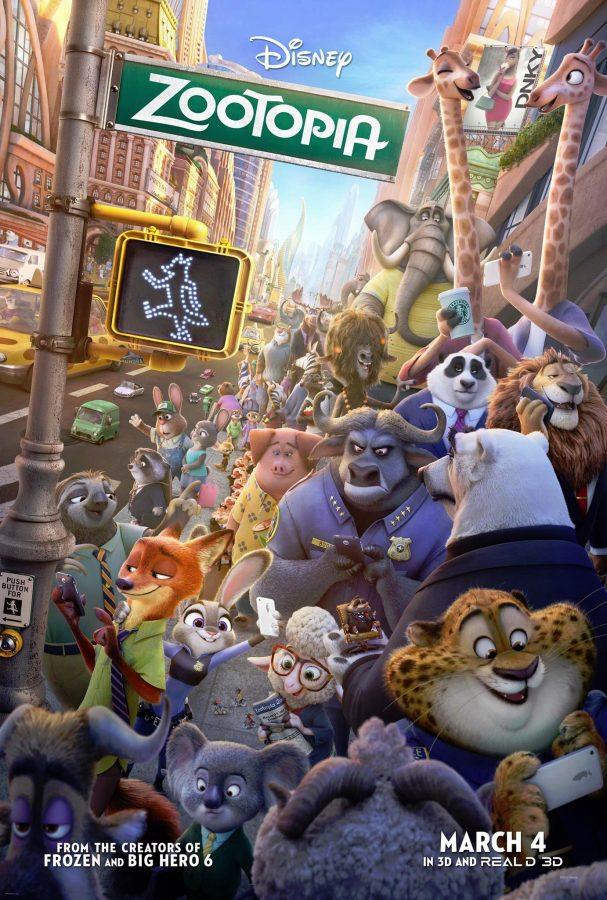 It’s not uncommon for animated kids movies to have deep underlying messages. “Wall-E” taught people the importance of taking care of the environment. “Happy Feet” showed us it’s okay to be different. Now, Disney gives its audience “Zootopia,” which tackles discussion of discrimination and stereotypes that hurt everyone. Along with delightful art and animation, this must-see movie expertly argues that even though society may act like they aren’t there, these negative connotations fester under the surface.

The movie opens by introducing a small-town bunny named Judy Hopps, voiced by Ginnifer Goodwin. Unlike other bunnies, Judy has big dreams of becoming a police officer in the shining utopia of Zootopia, where prey and predator live hand in hand.

However, police jobs are typically filled by large herbivores and predators such as elephants or tigers. Still, Judy is not deterred, and in a “Rocky” style montage, she goes from the verge of flunking out of the police academy to being the top student after learning to rely on her wit rather than her physical stature, eventually being accepted into the force as the first bunny police officer.

While working on her first assignment as a meter maid, Judy meets Nick Wilde, a literal sly fox voiced by Jason Bateman. In a flashback to her childhood, it is discovered that Judy was bullied by a young fox, leaving her with a wariness for the creatures. However, she helps Nick buy his “son” a popsicle from a prejudiced elephant who refuses to serve a fox, only to find that the fox had scammed her, and Nick’s son was actually his accomplice.

In “Zootopia,” foxes are stereotypically selfish, sneaky con artists, whereas bunnies are helpless, cute and complacent. Judy even comments how one bunny can call another “cute,” but another animal can’t, a detail with an obvious parallel the real world. Though Judy has outright rejected the role society has created for her, Nick seems to have embraced his.

Naturally, through the course of the movie, Judy and Nick end up working together as partners on the case of a missing otter. As the two learn more about each other over the course of solving the mystery, it is revealed that even though Nick is outwardly a hustler as all foxes supposedly are, his motives aren’t as selfish as one might expect. In another emotional flashback, Nick remembers how he was physically bullied and mocked by his peers for being a predator and nothing more than an untrustworthy fox. Because of this, Nick feels that there’s no point in trying to be anything more that what society will see you as. In his words, “You can only be what you are. Sly fox. Dumb bunny.”

A deeper and more culturally relevant movie than one might expect from seeing a trailer or two, “Zootopia” invites discussion of the role of racial and socioeconomic status in today’s society. It directly commentates on how society separates demographics by establishing stereotypes like foxes being sneaky and untrustworthy and rabbits being dim.

However, while these stereotypes do exist, the movie highlights that most are usually externally ignored by people in the name of equality. That doesn’t mean they aren’t there though, and when something happens that falls in line with one of these negative stereotypes, people assume that means it has been proven right, a process that leads to the central plot of the film.

The overall plot connects distinctly to larger and more current events such as the “Black Lives Matter” movement as well as the fear and stigma around Muslims in America: When a ferret and panther go feral for unknown reasons, Zootopia citizens begin to fear harmless predators because of their historical biological disposition to violence, although predators in modern Zootopia are civil. Members of the prey demographic begin to commit acts of violence against perfectly docile predators who are being discriminated against because of who they are, while predators organize protests against the oppression they feel. The police department even demotes a kind-hearted jaguar desk clerk, who only wants to eat donuts, because it doesn’t want a predator as the face of the department.

On a closer, more nuanced and detailed level, “Zootopia” makes direct references to social phenomena. From one-line references to daily social injustices to mirroring current events, the whole film can be connected to stereotypes and prejudice in society itself. Parallels can be drawn between bunnies being discriminated against as police officers and foxes getting refused service at ice cream shops to instances of job discrimination, religious establishments refusing service to LGBTQ citizens, and other demonstrations of prejudice.

“Zootopia” definitely warrants a second viewing, if not many more. The art, animation and world-building is outstanding, and the humor may even make adults laugh more than kids. The lighthearted movie not only provides great entertainment, but also important commentary on today’s society.