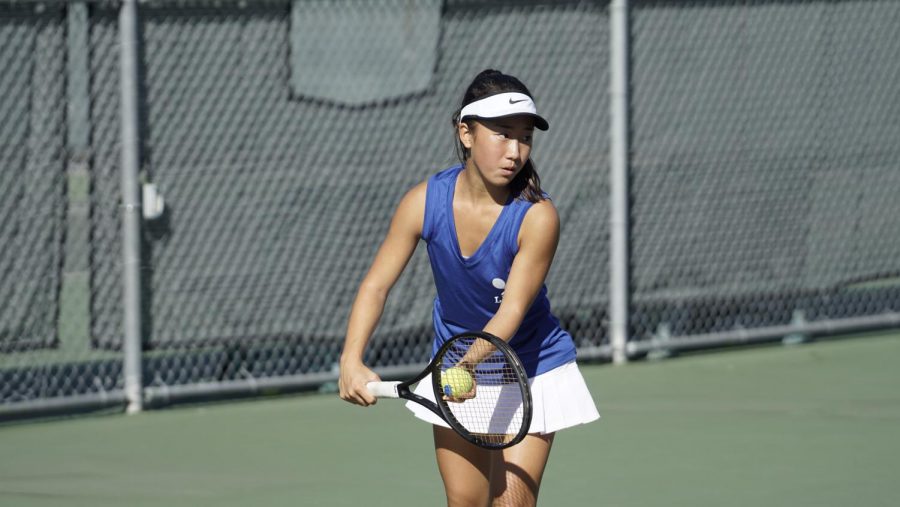 Freshman Yuu Ishikawa sets and launches the tennis ball away to her opponent. As it returns to her, she quickly calculates her next move, sprinting to position herself for another hit. Though most opponents wouldn’t expect someone with Yuu’s small frame to deliver strong returns, she uses speed and poise to position herself perfectly, slamming the ball across the court, giving her opponent no chance to react. It is feats like this that makes Yuu currently ranked 14th nationally for tennis.

As a freshman on the varsity girls tennis team Yuu exhibits a high level  of skill in every match she plays, rising above many of her peers despite her 5-foot-1 stature. Initially exposed to the sport as a toddler, she began training at the age of four and is currently being coached by her father.

Though tennis players at a height disadvantage often have trouble with the difference in strength against bigger players, Yuu more than makes up for it with her speed and attacks the ball. Instead of countering her opponent’s shot, Yuu begins the plays offensively, making her opponent follow her lead and setting the tone for the match.

Select players in the past at Los Altos have also demonstrated this kind of skill, but Yuu has exceeded them due to the various types of shots she’s mastered: drop shots, slices, volleys and overheads. As a result, she is ranked 4th sectionally and 14th nationally by the United States Tennis Association.

“One of the main attributes to her game [is that she isn’t] tall, but at the same time, [she is] very aggressive so it hides her lack of size by being aggressive, and it can neutralize the opponent,” varsity girls tennis coach Hung Nguyen said. “Her aggressive style makes her game really stand out.”

Though height disadvantages prevent the level of strength-building available to taller players, it contributes to speed on the court — which has made Yuu the fastest player on the team.

She also regularly works with a physical trainer who helps her achieve the physical goals she has for herself. Her training for tennis outside of Los Altos tennis season includes exercising at the gym or park and working with a private coach from the San Jose Swim and Racket Club — all on top of practicing with a few hitting partners for two hours a day. Her commitment to tennis reflects her competence in the sport, overshadowing her height.

“For my height, I think I do have a lot of power, but just not as much as the girls that are really powerful and strong,” Yuu said. “Overall, I think I’m an aggressive player, so I like to come in and attack.”

She has participated in many national tournaments, garnering impressive results in most of them. In March, she competed in the Easter Bowl, the largest national tournament of the year, and she beat many accomplished players to progress to higher rounds. In addition, she played in Intersectionals, a prestigious tournament that selects four boys and girls from different sections of the country. There, her section of Northern California won for the first time in history partly due to some crucial matches played by Yuu.

In the future, Yuu hopes to attend a Division II college and continue to play tennis there. Nguyen, however, believes that she could play for a Division I college. Though there’s plenty of room for Yuu to improve in the course of her high school career, he trusts that she will continue to grow.

“In the three years, she’ll probably improve her power so the big players can’t overpower her anymore,” Hung said. “I mean, once she achieves that, the sky’s the limit for her.”

As a very capable freshman on the school’s varsity team, Yuu’s future in tennis is looking up. Her ambition will hopefully contribute to her dreams of turning pro.

“To get there, I have to keep working, just keep trying to improve and just challenging myself to do better,” Yuu said.