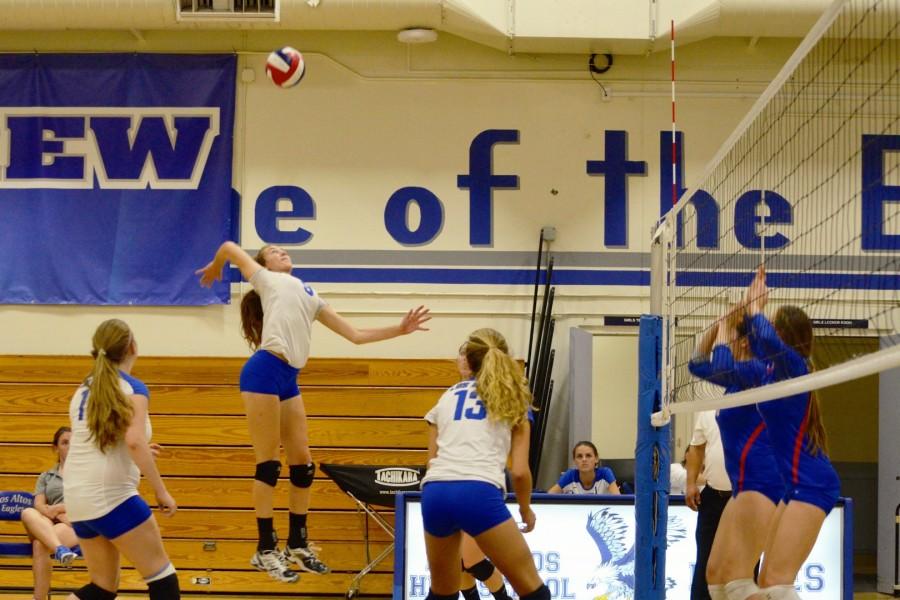 Senior Lulu Kishton jumps to spike the ball. The girl volleyball team is one of the top teams in CCS and looks to go far in the playoffs. Photo by Kunal Pandit.

The varsity girls volleyball team is looking to make a strong run at CCS after facing a tough loss in the finals last year. This season, the Eagles moved up to the Division I bracket, where they will no longer encounter their usual opponents like powerhouse Archbishop Mitty, but rather teams they are yet to play or have only seen during tournaments not league-related.

With a league play record of 11-1, the Los Altos varsity girls volleyball team claimed the league championship after beating second place Los Gatos. During leagues, the Eagles suffered a sinlge loss, to rival Mountain View High School. The team will enter the CCS tournament as the top seed.
As well as having an arsenal of talent on their side, the Eagles play off of a strong love and excitement for the game.

“Our team is really good at being enthusiastic in cheering, we’re definitely the loudest and most obnoxious team of all the teams, and it helps so much…,” Kate said. “We call Sarah Tritschler our bench captain. She is in charge of cheering from the bench and leads our cheers and does a fantastic job at it.”

Right now, the team’s biggest challenge is overcoming slow starts at the beginning of their games.

“We usually start pretty slow, so we struggle to get our energy going at the very beginning of the game [and] we lose a bunch of points in the beginning, and then we struggle to make it up,” Kate said.

With leagues finished, the Eagles are focusing on improving upon their weaknesses before the first CCS game. The team must work hard toward becoming a more cohesive team to ensure a good run at CCS.

“I hope to end the season on a good note,” junior Katherine Mumm said. “For our seniors, this is their last season of [high school] volleyball, and so I want us to go out with a bang.”