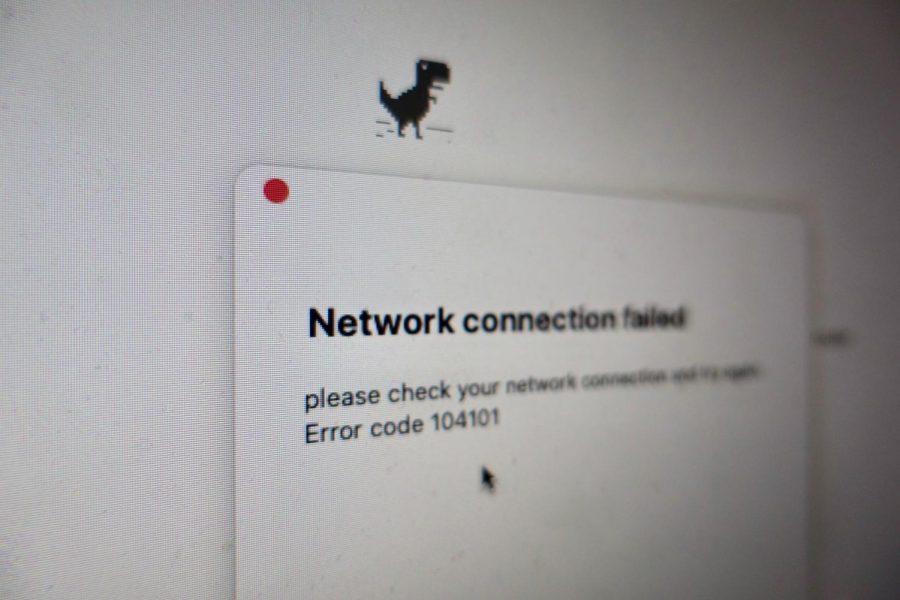 Los Altos High School’s notoriously volatile WiFi networks have largely faded from the limelight since last March when schools shuttered. But as the Mountain View–Los Altos School District plans to break the year-long stint of distance learning with an April hybrid return to campus, questions remain as to whether the networks will be able to handle the sudden influx of users.

By Navya Singhai and Cedric Chan

Los Altos High School’s notoriously volatile WiFi networks have largely faded from the limelight since last March when schools shuttered. But as the Mountain View–Los Altos School District plans to break the year-long stint of distance learning with an April hybrid return to campus, questions remain as to whether the networks will be able to handle the sudden influx of users.

To save bandwidth, students and teachers will be instructed to follow internet usage “best practices,” according to Information Technology Department Director Bob Fishtrom. Some of these practices — such as that students on campus should not turn on their cameras — may significantly frustrate current teaching plans.

But Fishtrom has not announced these guidelines to teachers or District administrators, a week after the hybrid plans were made public. When asked, District Teachers’ Association President David Campbell, Distance Learning Administrator Teri Faught — who has recently been named the associate superintendent for educational services — and multiple teachers said they were unaware that any such guidance existed.

Fishtrom said he is waiting to finalize the list of practices before releasing them but is waiting to see how other districts’ returns go. His goal, he said, is to send them out by the end of the month.

“I’m going to see all the possible suggestions before we send out best practices,” he said in an interview. “I don’t want to say to a teacher, ‘Hey, you could do everything you want on Zoom,’ and then next week say, ‘Well, we’re gonna have so many kids, maybe we should turn this off.’”

The current hybrid proposal, which could see up to half of the student body on campus at a time, still mandates that most in-person students remain on Zoom for equity purposes, potentially straining internet services that have long suffered from a streak of sluggish connectivity and abrupt failures.

The department has revamped some of the school’s systems, which suffered a ransomware attack last year, but Fishtrom refused to guarantee system preparedness before he definitively knows how many students will be returning.

Most concerning of the IT Department’s suggested best practices is that students on campus will not be able to turn on their cameras, throwing a wrench in instructional plans that will already be disrupted by the switch to hybrid learning.

“I had not heard this. But if it is true, I would not be happy about it,” Science Department Coordinator Darren Dressen wrote in an email.

Classes that rely heavily on student collaboration will likely be most impacted if these guidelines are implemented. Acting and Broken Box teacher Nancy Moran said that for her classes, students not being able to turn on their cameras would render acting in the same scenes as remote students impossible, raising questions about students switching between groups or uneven distributions of students.

“It does cause a little bit of division because you’re never going to be able to mix them up as well as you would if we were all on camera together,” Moran said in an interview. “What we really want to avoid is creating two different curricula.”

Other best practices include the following:

being on the right network
using classroom audio systems such as microphones
requesting any necessary equipment (e.g., monitors, audio equipment, etc.) from the IT Department
using operating headsets in class
teachers using their projectors as the screen they “share” on Zoom

The teachers’ union is expected to sign an agreement with the District this week formalizing the hybrid return plan, but Fishtrom’s best practices have yet to be publicly announced. Fishtrom’s plan to release the best practices by the end of March leaves teachers less than three weeks to make necessary changes to curriculum before hybrid instruction begins.

The IT Department, Fishtrom said, has made WiFi systems “extremely strong and stable” since last March. But the “Bring Your Own Device” program may cause problems on the students’ end, as the District has no way of standardizing the hardware. Regardless, the hybrid plan’s extensive use of Zoom will heavily tax the internet system.

“You also have to know that Zoom is a streaming service,” Fishtrom wrote in an email. “Having every student on Zoom, or every student streaming a YouTube video at once, puts a strain on even the strongest networks out there.”

Starting in January and ramping up in the past week since the hybrid plan was announced, the IT Department has been working with Associate Superintendent of Business Services Mike Mathiesen to ensure classroom preparedness, including stress-testing the WiFi and checking classroom equipment like projectors.

These assessments have not considered the maximum number of students the network could accommodate, according to Fishtrom, although issues with students’ personal devices may make this estimation difficult even with more data on the number of students returning. Nor are the preliminary tests quite comparable to the live streaming that Zoom will require, Fishtrom said, although they have shown promising results so far. Mathiesen was not immediately available for comment.

“All technology updates I have received thus far indicate we are prepared for return,” Superintendent Dr. Nellie Meyer wrote in an email.

Some teachers have reported persisting WiFi failures as the District inches toward a return with its stable groups model. English and New Media Literacy teacher Robert Barker, who works on campus every day of the week except for Wednesdays, was one of those affected.

“My Zoom meetings frequently drop, and I get the message ‘Your Internet connection is unstable,’” Barker wrote in an email. “I do want to say our current IT team is very responsive and supportive. I don’t know if our infrastructure is where it needs to be yet, though.”

The District has not yet fully developed a backup plan should the WiFi crash, according to Fishtrom — but all the potential backups would leave at-home students working asynchronously, potentially creating a disadvantage compared to in-person students who would have direct access to their teachers, Fishtrom said.

Since January, the District’s network has gone out on at least two separate occasions because of outside factors such as connection issues with the county and recent storms. The IT Department has since simulated power outages to test how long the network takes to reestablish connection, but “there are a lot of outliers that we just don’t have answers for,” Fishtrom said.

In the coming weeks, Fishtrom said the department will continue focusing on strengthening network stability, though most major upgrades have already been done.

“I am hoping to prove you wrong and restore your confidence,” Fishtrom said, referring to students’ and faculty’s lack of faith in the school’s wireless network.

The District is currently in negotiations with the Mountain View–Whisman School District to try and set up a backup network, but “those things don’t happen overnight” and will not be ready in time for any return this school year, Fishtrom said.

Still, teachers are eager for this step toward normalcy, despite unresolved kinks in the plan.

“Anytime you talk about changing anything, there’s that sense of anxiety and stress, but I think it’s worth trying,” Moran said. “I am super excited to go back, even though I’m very worried about what it’s going to look like.”

Nothing is set in stone yet, as negotiations continue between the District and the teachers’ union. The details of both the hybrid plan and internet preparedness are set to be hammered out in the month left before the slated April return.

“They are very confident that things will work, but until they work, until we’re there, we will be cautiously optimistic,” Campbell said.

Stella Huang contributed to this report.