Opinion: Why I couldn’t be friends with a Trump supporter

I can respectfully coexist and work with people across the full political spectrum. However, the willingness to overlook Trump’s offensive words and actions conflicts so fundamentally with my values that it’s a deal-breaker for my close friendships. 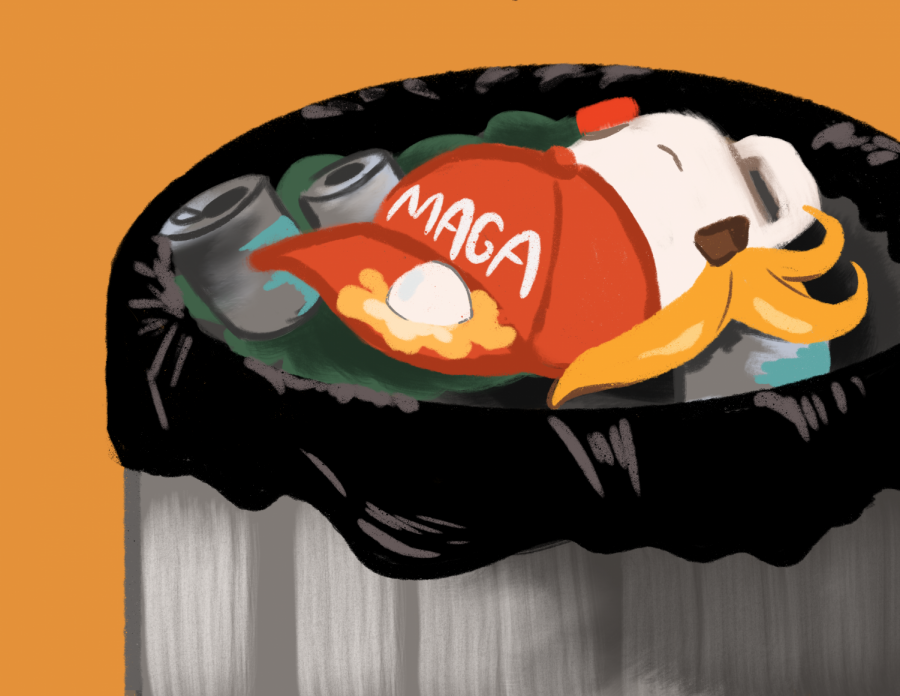 What’s the difference between racism and pizza toppings? One is a major dealbreaker, and the other isn’t. In such a politically polarized nation, it’s easy to see why people are urging everyone to come together and love their neighbors regardless of political opinions. However, when basic human rights are at stake, it’s not that simple.

I’m sure many of you can relate when I say that my Instagram and Twitter feeds are flooded with passionate messages from all parts of the political spectrum. But even in this seemingly endless sea of information and opinions, the following statements caught my attention:

So here comes the controversial statement: Because I believe that this is an issue of morality and basic human rights far more than it is an issue of politics, I could not be friends with a Trump supporter.

Whether that statement made you want to cheer or angrily smash your keyboard in the comments section, I think the rest of this article is still worth a read.

It’s no secret that America’s political climate is extremely polarized, so much so that it often delays or prevents real progress from being made in our country. I’ve seen firsthand how ugly the comments can get on political social media posts, and I see where people are coming from when they post idealistic statements urging Americans to come together and love one another regardless of differences in opinion or party affiliation.

Let’s look at the numbers. According to a 2019 Pew Research Center study, 64 percent of Republicans said they saw Democrats as more close-minded than other Americans, and 75 percent of Democrats said the same about Republicans. Between December 2016 and September 2019, the percentages of major political party members who gave members of the opposing party a “cold” rating on a “feeling thermometer” scale increased steadily —  from 58 to 83 percent among Republicans and from 56 to 79 percent among Democrats.

So, on the most basic level, I understand and support the desire for a more unified nation. I would love it if this idealistic, harmonious country were a realistic possibility in the future, but I don’t see it happening today.

It’s Not Really About Politics

Here’s where I think it’s important to make the distinction between Republicans (or conservatives) and Trump supporters. To me, they’re not interchangeable terms. The establishment of groups like Republican Voters Against Trump, Republicans for Joe Biden and The Lincoln Project illustrates the opposition to Trump’s actions and policies even by Americans who had previously aligned themselves with the GOP.

Republicans tend to favor lower tax rates, increased military spending and free market capitalism, generally supporting “small government” over “big government.” While I disagree with some of these ideas, they’re not deal-breakers for me in a relationship; in fact, I have several friends and extended family members who align with more conservative beliefs. But, for me, Trump supporters are a different story.

If you voted (or would have voted) for Trump, you voted for sexism and misogyny. You chose to promote a man who has called women “horseface,” “dogs,” “Miss Piggy” and “Miss Housekeeping” and who has been recorded saying things like, “I just start kissing them” and, “Grab ’em by the p*ssy. You can do anything.” You stand behind a man who has been accused by 26 women of various instances of sexual assault since the 1970s.

If you voted for Trump, you voted for racism. You chose to promote a man who publicly thanked a group of his supporters chanting “white power” and used the racial epithet “thugs” to describe people protesting peacefully against police brutality. You stand behind a man who, on live national television, refused to explicitly condemn white supremacy.

If you voted for Trump, you voted for discrimination against the LGBTQ+ community. You chose to promote a man who barred transgender troops and military recruits from openly serving in the military, who denied U.S. embassies permission to fly pride flags on their flagpoles and whose administration withdrew Title IX protections for transgender students.

If you voted for Trump, you did not “choose kindness” like those overly simplistic social media posts urge us to. You chose to promote sexism, misogyny, racism and discrimination, or you at least decided that they’re not deal-breakers to you. To me, they most definitely are.

In the end, it’s not really about Trump either. Sexist, racist, homophobic and transphobic people did not begin with the Trump administration, and they will not end with the Trump administration. In many cases, having a leader who so openly aligns with these characteristics has simply brought these people out of the woodwork and empowered them to share their hurtful beliefs with the world. Regardless of Trump’s existence, I wouldn’t want to build friendships with people that hold these beliefs, and I can’t in good conscience stand by a social media infographic that asks me to overlook these deal-breakers when so many millions of people’s basic human rights are at stake.

A Series of Concessions

I know that this article will inevitably stir up some controversy, so I’ve come prepared.

First of all, I can understand why the current president’s successes may make him an appealing candidate. Some of his accomplishments while in office, such as the First Step Act and the Right to Try Act, have gained bipartisan support and deserve positive recognition. However, a few effective policies should be the bare minimum expectation for our nation’s leader and certainly don’t outweigh the damage he’s inflicted on so many through his complete disregard for human rights and safety.

Secondly, there’s no doubt in my mind that I could be friends with a former Trump supporter. Just because someone used to align with certain beliefs doesn’t mean that they always will. (One of my favorite TED Talks, by Megan Phelps-Rogers, is fantastic proof of this statement.) I believe strongly in the power of humans to learn, grow and change, and I would be doing myself a disservice if I refused to befriend people with whom I used to disagree.

Regardless of what I think about current Trump supporters, I still strive to empathize as best I can. Voting disinformation is rampant, and our country has largely failed in educating its citizens about the government in general; according to law professor Ilya Somin, only about 34 percent of Americans can correctly name the three branches of government. I understand that many Americans find it difficult and confusing to make decisions when voting, especially if they have been surrounded by members of a particular political party for the majority of their life. I am privileged and grateful to have parents who engage in political discussions with me and encourage me to form my own opinions through independent research and consideration; I encourage others to do the same if possible.

And most importantly, while I don’t respect the beliefs of Trump supporters, I definitely don’t hate them. I’m willing to work and have conversations with Trump supporters, and I of course still believe that everyone is entitled to the basic rights of “life, liberty and the pursuit of happiness.” I hope that we can build a nation in which the general sentiment of those “love your neighbor” social media posts rings true, in which everyone’s lives are valued, in which everyone is guaranteed basic human rights and in which everyone can encourage others and raise their children to be loving, empathetic, equity-seeking members of society. But Trump and his supporters aren’t working toward that vision.

A Quick Note on Pizza Toppings

Just so we’re clear, I enjoy the occasional slice of pineapple on my pizza, and it’s not a deal-breaker for me if you disagree with me on that.

Whether or not you agree with me, I appreciate you having read this article. I hope you’ve learned something, evaluated your own beliefs or thought about your personal values in some way, shape or form over the course of these past 1,405 words.

Let’s circle back to those first two quotes.

Do I think these types of posts help to dismantle political polarization and increase unity in our country? Definitely not. Still, I think it’s just as, if not more, dangerous to push the narrative that, regardless of vastly different views on fundamental human rights, everyone can and should be friends.

In order to build that ideal nation of love, empathy and equity I think we all desire, it is crucial that we hold one another accountable for our opinions, rather than turn a blind eye to prevalent issues like racism, sexism and homophobia for the sake of a few friendships. So please, do your own comprehensive research, gain an understanding of your personal opinions and set boundaries that feel right for you.

And who knows? Maybe someday, those idealistic Instagram posts will come true, and Biden will come help me mow the lawn.

Monday, November 23: The Talon added a secondary headline to clarify the nuance presented in this article.