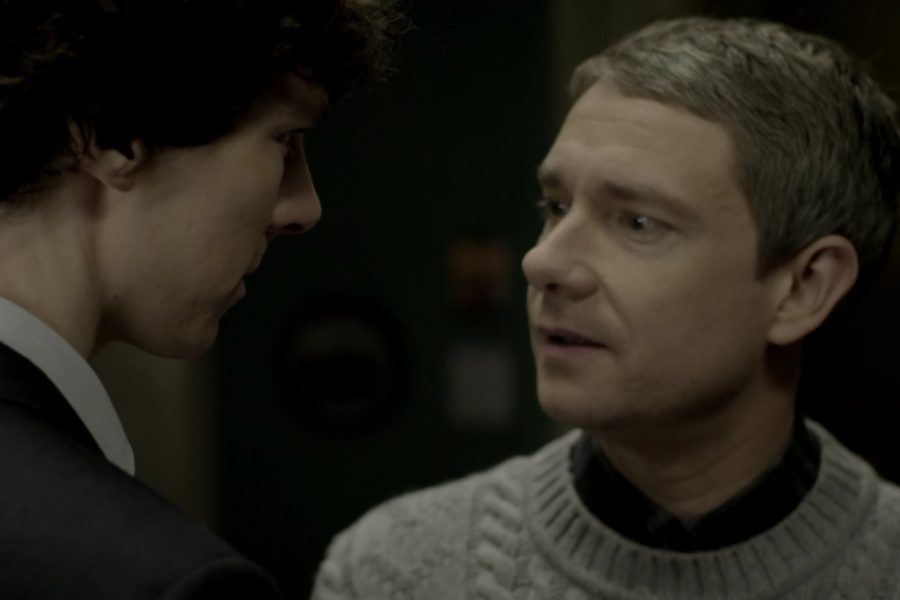 “It’s the gayest story in the history of television…We all certainly saw it as a love story.” Martin Freeman’s own description of the relationship between his character, John Watson, and Benedict Cumberbatch’s Sherlock Holmes would seem to affirm the suspicions of “Sherlock” viewers who saw it that way. In one scene, Watson leans intently across a candle-lit table toward Holmes. His eyes drift from Holmes’s eyes to his lips, and he inquires about Holmes’s relationship status. When Holmes confirms he is single, Watson grins and licks his lips. Were Holmes a woman, Watson’s attraction would be clear. But to perceive it that way, the viewer would have to be receptive to the subtle interactions that emerge between closeted gays — something not always obvious to non-queer people.

But despite Freeman’s comments, in the show’s most recent season finale, Holmes and Watson were confirmed to be just friends. This caused an uproar in the LGBTQ+ audience; once again, on-screen interactions and even seemingly overt admissions of the characters’ queerness had concluded in disappointment. For queer people, such subtext is a promise of representation. In leading viewers on with these subtle interactions before denying their existence, writers appear to participate in representation — then backpedal and refuse to follow through. In confirming that Holmes and Watson would never be together, “Sherlock” writers made it clear they are, and always have been, guilty of the practice — which is so common that it’s been given its own term — queerbaiting.

Queerbaiting, as defined by LGBTQ+ media, is the encouragement of subtextual romantic attraction between characters of the same gender without the intent of clarifying a romantic relationship. “Sherlock” isn’t the only show guilty of this; “Supernatural,” a fantasy horror television series, is also accused of queerbaiting for teasing that two of its male characters might be gay. Misha Collins plays protagonist Dean’s best friend, Castiel, and revealed that showrunner Jeremy Carver told him to “play Cas like a jilted lover to Dean.” This direction manifests in prolonged eye contact between the two men and persists despite writer confirmations the relationship would never happen. A similar pattern has emerged in crime drama show “Rizzoli and Isles,” where executive producer of “Rizzoli and Isles” Janet Tamaro has addressed speculations that her show’s two female leads may be gay by saying she “finds the lesbian theory amusing.” However, she still declares, “Rizzoli and Isles have been heterosexual from the first episode.”

Queerbaiting reduces queer people’s sexuality to a plot twist, a device used to make shows exciting. This invalidates the identities and hardships of queer people and squanders the potential for representation.

Subtextual attraction was one of the only available forms of representation under the Hays Code, the first set of film censorship guidelines, which dictated that gay people were sinners and were only allowed to be portrayed if they were punished. Sly innuendos, drifting eyes or other forms of subtext could work around these restrictions. If characters weren’t confirmed to be gay, writers did not have to punish them with beheadings or other gruesome deaths.

While writers previously incorporated subtext to show they were allies of the LGBTQ+ community with positive representation of queer people, times have changed. Successful shows featuring queer characters like “The Fosters,” “Grey’s Anatomy” and “How to Get Away with Murder” show there’s no excuse for not committing to representation. Now, subtext isn’t caring or thoughtful. Instead, writers who queerbait show they are more concerned with keeping their audience broad than giving queer people representation.

When writers queerbait, they can simultaneously claim representation and deny the queerness of any character. They appeal to LGBTQ+ audiences, but they also fear their viewership would drop if their film is branded as a “gay film” –– an argument also used to justify limiting racial representation. Writers will also turn on their audiences by denying queerbaiting, accusing the audience of reading too much into a show.

These low standards for queer representation allow writers to profit off of queerness without many of the benefits that result from true, openly gay depiction. Representation provides exposure of queer stories and lives to people who may not otherwise hear them, and this exposure moves people toward acceptance. The more personal details an audience gets to know about a queer person –– their favorite pastimes, how they take their tea, their nervous habits –– the farther the person gets from being a stereotype, and the more they become an individual.

It can also benefit queer viewers directly. In areas where homophobia is prevalent, queer people refrain from holding hands even in a darkened movie theater. Everything from seeing a judgemental double take on a bus to hearing threats and slurs shouted from across the street remind queer people they need to be careful to protect themselves. Media is a form of escape for many, and positive representation can provide queer people with a feeling of society’s acceptance.

Steven Moffat, one of the writers for “Sherlock,” voiced his support for gay representation, saying “I think it’s important for kids watching television to see themselves on screen.” Representation for queer people breaks down stereotypes and reassures them that their sexuality determines nothing else about them. If Holmes and Watson were confirmed to be gay, queer people could see themselves not as the “gay best friend” but as a world-renowned detective or a distinguished army veteran. Yet despite Moffat’s support, “Sherlock” still lacks recurring LGBTQ+ characters.