When bending leads to breaking: Injuries in gymnastics 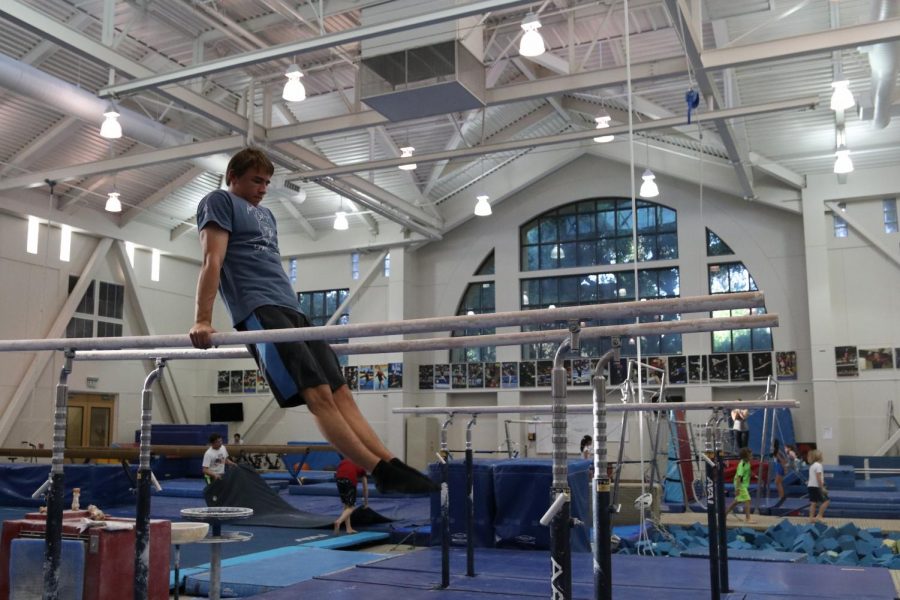 Before the 2017 Gymnastics World Championships even began, three gymnasts pulled out of the competition due to injury. USA’s Ragan Smith injured her ankle during warmups. Romania’s Larisa Iordache tore her Achilles tendon while warming up for the women’s qualifications. Japan’s Kohei Uchimura tore a ligament in his ankle during men’s qualifications.

These injuries are expected and universal in a high-impact sport like gymnastics. The physical and psychological effects of injuries cause many young gymnasts to stop training; it’s common to retire at the age of 12.

Senior Philip Carey and junior Peter Coe are two of many gymnasts who stopped training due to long-term injuries. Philip trained since age 2, while Peter began his gymnastics career at age 12, competing together at the highest level at their gym. Between the two of them, Philip and Peter won four of the six events at the Men’s Region 1 Championships and placed first and second respectively in all-around.

Despite their success, both stopped training this year due to back injuries arising from overuse. Both have facet joint syndrome in their spines, which creates pain when they twist their backs; Philip also has a herniated disk in his lower back.

While Peter follows gymnastics and watches it often, his injury has prevented him from continuing to grow in a sport he loves.

While his coaches wanted him to train for three hours, six days a week, as he got older, Philip realized this put him at a high risk for developing overuse injuries.  Instead, he began training four days a week and trained for three hours.

“If I could go back and do it again, I would have been a lot smarter about my training,” Philip said. “Gymnastics coaches can be very disciplinary and it’s hard to say no to them. The big thing is standing up to them when it’s too much because I think that’s what most guys have trouble with.”

Through his training, Peter encountered two common coaching mentalities about injuries: pushing through the pain, or laying off the injury and working on other events.  When his facet syndrome flared up, one of his coaches suggested he simply arch his back less when performing a skill.  But this didn’t prevent the joints from being overworked, and he still had a long-term injury.  Another coach suggested to practice other events to preserve his back, and he trained heavily in pommel horse, which led to developing forearm splints, similar to shin splints.

Continuing to train despite pain also brings psychological repercussions. Senior Tess Callan did gymnastics from the age of 7 to 16. She developed stress fractures in her back and then fractured her foot. This injury, combined with burnout, caused her to stop training.  Due to the severity of these injuries, Tess could not train for about six months, and rebuilding her strength took away from the enjoyment of gymnastics.

“I wasn’t enjoying myself anymore, and I didn’t find that I wanted to go in and practice,” Tess said. “I was in pain a lot while I was doing gymnastics, and I wasn’t where I wanted to be because I was out for such a long time.”

The psychological effects of injuries caused senior Lisa Deng to stop training when she was 11. After spraining her ankles three times and jamming her finger, her injuries caused a mental block to fearlessness.  Suddenly, she saw exactly what could go wrong while performing a back handspring and trying to land perfectly on a four-inch, three-foot high beam every time she practiced the skill.

“Gymnastics is a sport that requires an insane amount of athleticism and fearlessness,” Lisa said. “So when you make a bad mistake — like having your foot slip off the beam or falling out of a tumbling pass — that leads to a serious injury. Not only do you pause your progress in such a fast-paced sport where everyone improves rapidly, but you also bear the emotional impact of the fear you felt.”

“It was six years ago but I still remember being so relieved when they allowed me to quit,” Lisa said.  “It felt like a huge load of stress and pressure and physical demands getting dumped off my shoulders, and it was a really good time for me.  I was already searching for what I could do after I quit gymnastics right after they gave me the go to quit.”

Both her coaches and her parents saw potential in her that made them reluctant to let her quit. But through her persistent communication, she was able to convince her parents and stop training before she could sustain a major long-term injury.

Communication between gymnasts and coaches could help prevent overuse injuries in gymnastics to make sure gymnasts rest when needed. But Tess admits that talking to coaches can be nerve-wracking.

“You have to figure out how to know your body, but it’s hard for a little girl to know when to say something rather than thinking, ‘Oh I’m just complaining,’” Tess said. “I think communication is a really big thing because I would have a really hard time talking to my coaches because they’re really intimidating as a little girl.”

“Mats and padding are a very important part of preventing injuries,” Wallace said. “Overuse injuries can be reduced by using mats and padding, so we will use mats at times when training so that the gymnasts can do more repetitions with less strain on the body.”

The regulations for mats in competitions can also cause more injury rather than prevent it, Peter said. World Class-level competitions only have four-inch mats (compared to the eight-inch mats gymnasts typically train on). Mats at gymnastics meets are eight inches as well, but they are often placed on hardwood floors which can still cause injury due to impact. To prevent injuries such as Smith, Iordache and Uchimura’s, these regulations could be altered to increase the safety of the gymnasts.

Despite the injuries they have sustained, Philip, Peter, Tess and Lisa have all chosen new physical activities to stay fit. Their gymnastics backgrounds provided them all with strength, flexibility and balance which have made them successful in their new sports, and they’ve also found the characteristics of gymnastics they grew to love in their new sports, with less risk.

This spring, Philip plans to do diving. This will be his first time seriously training in diving, and he looks forward to utilizing his gymnastics training in this new sport.

Peter found structured and more injury-free strength training in a sport he tried when he was younger: swimming.

“One of the things I learned from when my back was injured and I could only do core was that I really enjoy trying to push myself,” Peter said. “Swimming looked like a sport where you could really push yourself without fear of injury.”

Tess turned to cross country and track to keep in shape, helped by the foundation of strength gymnastics gave her.

“I liked running and I thought it’d be fun,” Tess said. “I wasn’t looking for something that was extremely stressful where I would have to pick up the skills of another sport, and track is more fitness-based.”

Since she quit gymnastics six years ago, Lisa has found her perfect blend of athleticism and artistry in dance.  While she found gymnastics often inhibited her artistic side, she was able to explore her artistry through dance.

“Dance is an art where I can both express my artistic side and my physical facility and utilize them together in a composition of physical and visual art,” Lisa said. “Combining all these elements of visual art and also being able to move your body was something that was so unique to me, and I really enjoy expressing myself through these motions.”