What’s up with Wi-Fi? 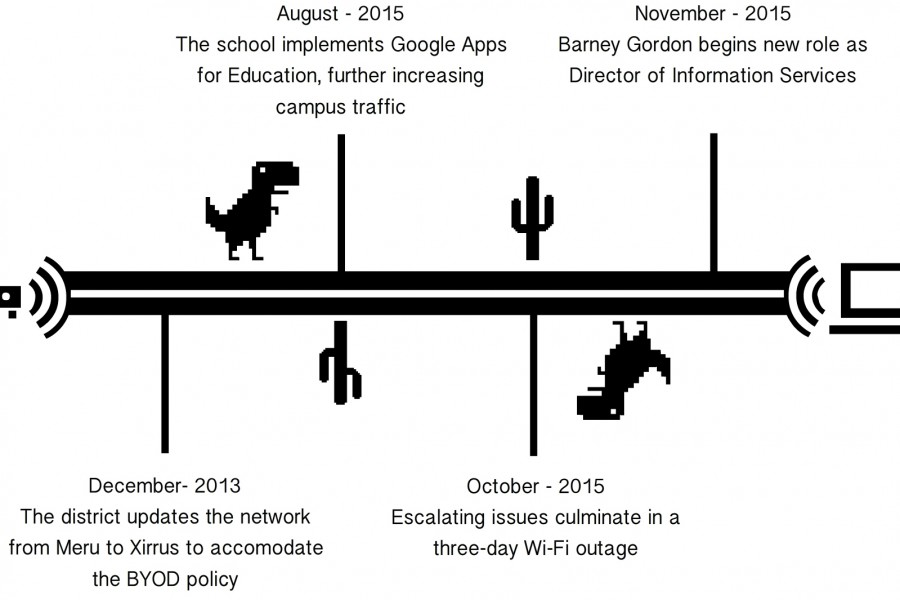 Following numerous student connectivity issues, the district is working to reshape the underlying support system behind the school’s Wi-Fi. Despite problems surrounding the implementation of the current network and its development, the district hopes that a new focus on the management of its Wi-Fi networks will enable more reliable campus coverage.

Due to the Bring Your Own Device (BYOD) policy and the recent school-wide adaptation of Google Apps for Education (GAFE), stable Internet connectivity is a necessity in many classes. Problems with Wi-Fi, such as slow connectivity speeds and entire shutdowns, require teachers to rethink lessons and lose important class time.

“Connecting to the network is critical… and it’s irritating… when you can’t rely on that,” Associate Superintendent Mike Mathiesen said. “We’ve been very sensitive to that.”

Toward the beginning of the school year, the school experienced a particularly severe outage of Wi-Fi that left the majority of the students entirely without internet for several days. This was due in part to the IT department ignoring key firmware updates to the routers.

“[Updating the routers was] like updating your iPhone from iOS 5 to iOS 9,” Mathiesen said. “I use those numbers because there were several updates that our IT staff had not applied throughout the last year and a half since the system was installed.”

Although the problems were ultimately resolved, Mathiesen believes that there should be a more streamlined process for supporting the network.

“Our IT staff were the ones who really should have been doing [the updates], and they didn’t,” Mathiesen said. “That’s the blunt answer. One of the main tasks [going forward] will be making sure we have a better support process in place, that there’s specific people tasked with monitoring it, that our staff gets the required training.”

The disconnected communication among the network’s administration stretches back to the original implementation of the school’s current Wi-Fi system. After the district decided in 2013 to update the outdated Meru system, they faced two replacement options for network hardware: Xirrus, or the routers of a local supplier called Hula Networks. However, due to a miscommunication within management, one of the networks was never tested, and the Xirrus system was installed by default.

“The intent was to do a side-by-side comparison and evaluation,” Mathiesen said. “But a proper evaluation of the two systems was not done… Hula Networks called up [and said their] devices were never connected, there’s no record of that.”

This is why Mountain View has a different supplier of routers: after the untested installment of the Xirrus system at Los Altos, the district awarded Hula the chance to install its system at Mountain View High School.

“I think [using Hula’s hardware] was one of those opportunities,” Mathiesen said. “We didn’t want to put the district in a place of being exposed to… ‘You could’ve gone with this system and you didn’t.’”

There is no clear indication yet of which network is more effective; the prices were competitive, and the coverage similar.

“Mountain View has had similar problems, but they have a very different system,” technology coordinator Chris Avila said. “As of right now their system appears to be stable and functional.”

However, both while the schools’ networks are stable now, Mountain View’s network has so far proven to be more reliable.

“The blunt assessment is that they haven’t had as many issues as Los Altos in the last two months,” Mathiesen said.

Another early communication issue was that the district originally ordered more routers than were needed. Many of these extra routers sat in a warehouse, expensive and unused, for most of last year. Only recently have they been reassigned to new access points within the district or returned to the manufacturer.

However, thanks to recent changes in leadership and a more comprehensive focus on the importance of Wi-Fi, the district hopes to stabilize Internet access in the near future. On November 16, Barney Gordon took over as the district’s Director of Information Services. He hopes to improve intra-district communication and organization, as well as continue essential ongoing projects.

“I intend to work closely with the school sites and Educational Services staff to evaluate current educational technology within the district and help implement a plan for the future,” Gordon said.

Part of this plan includes the development of a new physical space to store and maintain critical servers.

“One behind-the-scenes effort of the district is the creation of a new and more robust data center,” Gordon said. “The construction continues today, and we are expected to migrate our existing servers into this new, industry-standard space over the holiday break.”

However, Gordon recognizes that the challenges specific to his position are unique in their demanding time constraints.

“One of the biggest challenges in this industry are the rapid changes in technology,” Gordon said. “[Networking hardware is] an industry that sees a near complete technology turnover every year.”

Despite these past issues with implementation and maintenance, the district is optimistic that the new structure and plan for ongoing Wi-Fi support will allow students to focus on their classes and not their Internet connection.