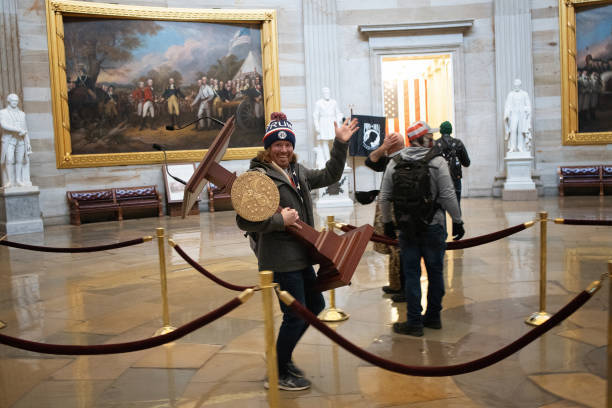 A mob of President Donald Trump’s supporters stormed the Capitol building, halting Congress’s counting of electoral votes around 1 p.m. EST today. The rioters, many wearing camouflage gear and carrying Confederate flags, shattered windows and broke into lawmakers’ offices. Vice President Mike Pence and other lawmakers were evacuated as the Capitol building was placed on lockdown.

The Democratic and Republican National Convention buildings were also evacuated after a pipe bomb was found at the RNC. One woman who appeared to be a part of the mob was shot in the neck and has been pronounced dead at an area hospital.

Some representatives took to Twitter to condemn the violence. Trump tweeted to his supporters, asking them to “remain peaceful.” Around 2 p.m. EST, President-elect Joe Biden addressed the rioting in DC from Wilmington, Delaware.

“The scenes of chaos at the Capitol do not reflect a true America,” Biden said. He called upon Trump to “demand an end to this siege.”

Trump responded with a video broadcast from the Rose Garden, telling the rioters they “have to go home now” and “we have to have peace.” However, he maintained his false argument that the election was a fraud.

The Capitol Police, Federal Bureau of Investigation and National Guard are present at the scene and are attempting to clear the premises. Mayor of Washington DC Muriel Bowser ordered a 6 p.m. curfew, which will remain in effect until 6 a.m. tomorrow morning.

We’ve compiled a list of sources to educate yourself on the current situation at Capitol Hill in Washington D.C. including live trackers, people to follow on social media, YouTube live streams at the scene and additional articles.

Live Updates and Photos from the San Francisco Chronicle

Violence on Capitol Hill Is a Day of Reckoning for Social Media, The New York Times

All Los Altos High School students have access to a free subscription to The New York Times. Here are the steps to logging in so you can stay updated with the latest national news.

1. Activate your free account using this link or through an email sent to your school account on September 3, 2020 from The New York Times.