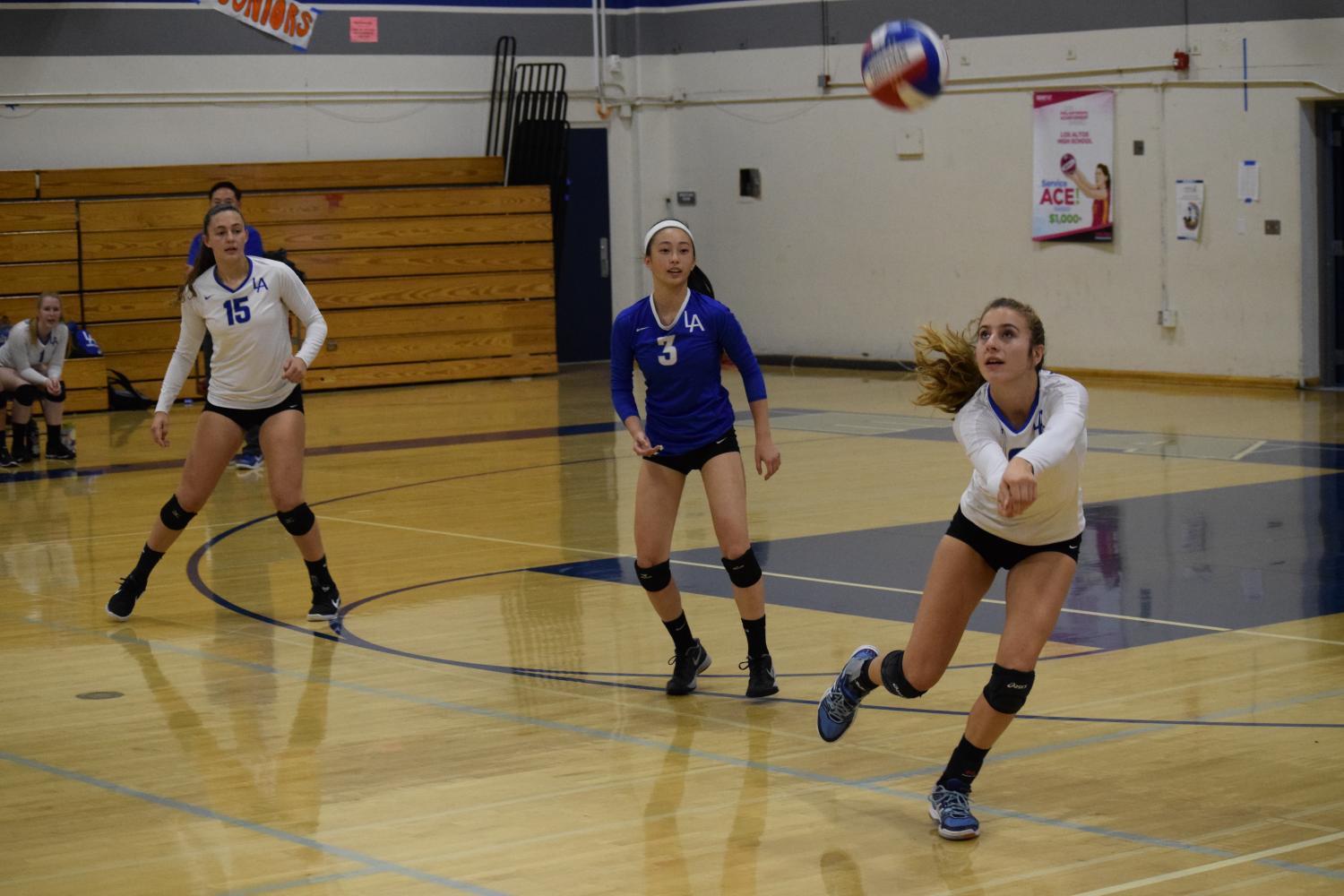 The varsity girls volleyball team shared a 6-4 record with league-newcomers Saratoga going into their match last Thursday. After dominating the Falcons in their first set, they were surprised with a steep loss in the second, but tight teamwork allowed them to edge out their opponents in two close sets and finish the game with a final score of 3-1.

The girls’ comeback was orchestrated by co-captain and senior Hanadi Nassif and sophomore Jackie Wang, with 13 and 9 kills respectively. Defensively, sophomore Katie Kishton repeatedly saved the day with quick blocks and digs that enabled a third-set win and set the team up for a game-ending fourth set.

The Eagles scored the first point in the beginning of the game, but lost points afterward due to errors in serving and digging. By the end of the first set, they landed a 25-14 win, showing the Falcons up both offensively and defensively.

“We look at every game as a high competition,” co-captain and senior Quinn Lavin said. “So going into this game we knew it was gonna be tough [and that] we will have to lay it all on the floor.”

Despite their initial success, the team started off with many serving errors in the beginning of the second set. They began to experience offensive troubles, but several saves from senior Jamie Kesten continued to keep them in the running. Although they used their second timeout to regain a rhythm and end the second set strong, they still lost 17-25.

“In the second set we lacked that competitive spirit,” Quinn said. “After winning the first [set], we backed off of our offensive and defensive plays, which killed us in the end because we gave away points.”

Using the momentum they had built from the last minutes of the second set, the girls returned with better offense and defense all around. Although they did fall behind, they were able to pick up the speed and tie the game 20-20 before a timeout was called by Saratoga. Thanks to Katie and co-captain Nicole Baxley, at the end of the set, the girls were able to bring home another win.

“The point where we knew we were going to win was [in the third set, because] we found our rhythm and kept things simple — pass, set, kill — and carried out energy through both good and bad plays,” Quinn said.

Once again, the Eagles had a rocky start, missing passes and serves, but thewhole team pulled together, collaborating to defend their territory and deny points. The final score was another victory for the Eagles, 25-20.

“[For our next match,] we are planning to start the game with much more energy,” Hanadi said. “We aim to stay consistent throughout the sets and not let up. We need to mentally stay strong and determined as well as positive in order to play our best.”

The girls volleyball team hopes to get another win in an away conference match against Monta Vista on Thursday, September 21.