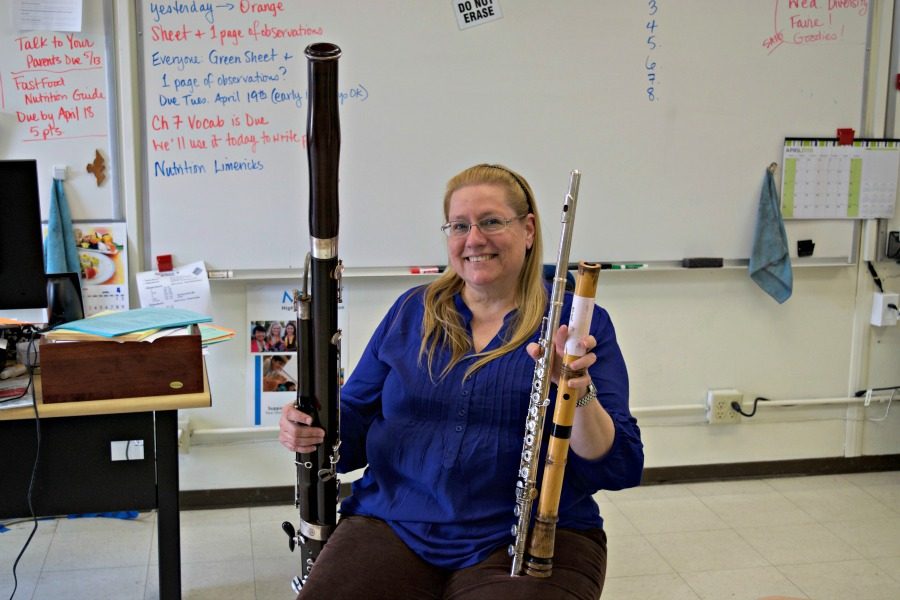 Health teacher Vickie Christensen smiles with just a few of the 20 musical instruments she can play: her bassoon, flute and shakuhachi. Christensen took interest in music at a young age, and she is currently a member of the South Bay Philharmonic. Photo by Francesca Fallow.

Music is the passion that feeds health teacher Vickie Christensen’s soul. It is simply a part of who she is. Christensen has conquered the world of music throughout her career: She has learned to play over 20 musical instruments (her favorite being the bassoon), worked with multiple genres and played in famous places like Carnegie Hall and Notre Dame cathedral. Christensen’s interest in music began early and flourished with the help of her family.

“My family is very musical, and I grew up singing and all that kind of stuff,” Christensen said. “My mom played violin and viola, my dad played bass, my grandfather composed pieces and played harmonica, [and] even when we would go camping we would sing in the car.”

From the beginning, Christensen dove head-first into music. As a fourth grader, she signed herself up for the high school and adult summer band camp. The fact that she was young and less experienced never deterred her love or confidence in music.

“One of my other friends, who was also an oboist, was also there,” Christensen said. “So we were just like, ‘Okay, we are crazy, but we love all this.’”

Throughout her life, Christensen used music as a way to unite people and to benefit the less fortunate. She involved herself in multiple different charities, such as the Stanford Hospital and Principal Scholarship Fund. She even taught orchestra here at Los Altos for five years, during which she organized an annual spring concert to raise money for the school’s scholarship fund, where they sold baked goods to raise money.

“The spring fundraising concert with the principal scholarship fund I found really gratifying in a lot of different ways,” Christensen said. “Number one, we could help out students who couldn’t afford to do some of the activities at school. Number two, it really helped every single student in the orchestra step up and be accountable for their own parts.”

These days, in addition to teaching health, Christensen uses music therapy to help disabled students at Mountain View High School. Christensen works with all kinds of students who have disadvantages both physically and mentally, and music is one way she believes she can help them feel confidence and happiness.

“[Some] of them have other movement things that keep them from participating in a lot of different things,” Christensen said. “But there are ways [in which] we can adapt instruments or songs or clapping with their helpers and things like that and they really enjoy it.”

Christensen has seen on many accounts how music can be used to bring people together. People who would never be expected to be seen together are able to enjoy each other and have fun because of the commonality of music.

“I invited anybody on the faculty, any of the teachers who played instruments to join in, and one of the physics teachers at the time was an oboist and one of the math teachers was a flutist,” Christensen said. “So they came in and one of the guys from the jazz band who played guitar also wanted to play acoustic guitar, and they did this excellent thing. It was just amazing.”

Currently, Christensen is part of an orchestra called the South Bay Philharmonic, where she plays bassoon, her main instrument. This orchestra previously worked for Hewlett-Packard by playing for employees, but due to the company downsizing, the orchestra left and is now independent.

“This is their seventh season being on their own, and so we have been doing all theses pieces with seven in them,” Christensen said. “[We] just did Beethoven’s Seventh [Symphony] and before that, we did Dvořák’s Seventh.”

Music is Christensen’s paramount passion, something that she has always held with her throughout her life. To all those who have a passion for something in their life, she recommends holding on to it and doing anything possible to further intensify that passion.