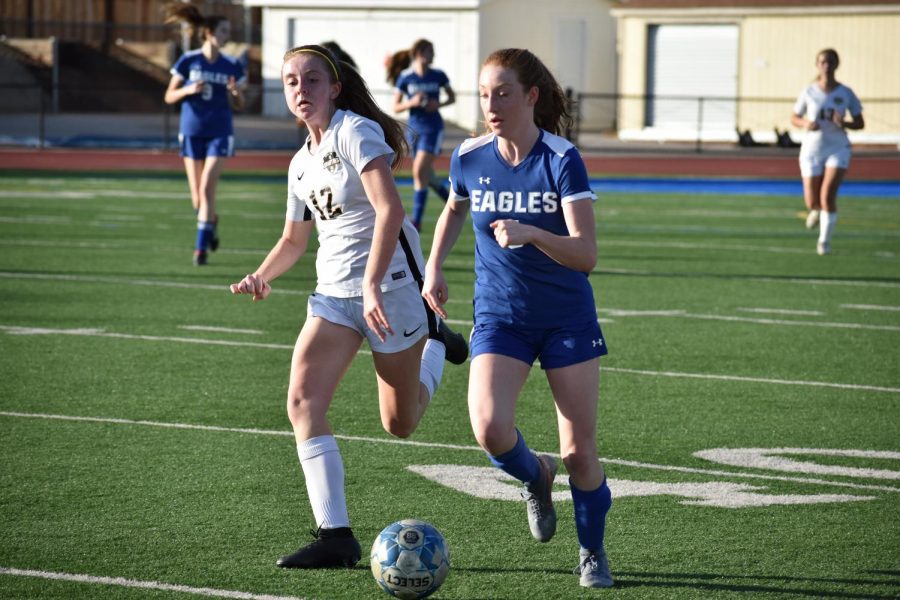 Senior Michelle Odnert breaks away from a Mountain View defender and heads towards the goal. Los Altos worked harder for the ball this game than ever before, but the Spartans eventually defeated the Eagles 1-3.

The varsity girls soccer team has been experiencing some difficulties with their gameplay in their season so far. The girls lost their rivalry game against Mountain View, one of their toughest opponents, on Friday, January 31.

The game started off slow, yet with high hopes to bring home a win. Having tied their last game 1-1 against Mountain View, the girls were determined to improve for their second opportunity to beat their rival on home turf.

In the practices leading up to the big game, the girls worked on perfecting their through balls, a type of pass that is sent between opposing defenders into open space for an attacker to have a chance at shooting a goal. Unfortunately, they were not able to fully reflect the skills that they had worked on during the game.

During the first half of the game, the girls started off energetically by always going after the ball after losing possession. However, as Mountain View gradually pulled ahead of them, the players began to feel discouraged, causing them to pursue the ball less over time.

“We definitely are playing harder than we played before,” Coach Marcos Giovannoni said. “But in games like this, we need to be focused all the way through, and I think we lost some [focus] in this game.”

The Spartans’s strong forwards also made it difficult for the Eagles to gain possession of the ball. Although the girls put up a good fight by making several fast breaks, one of the greatest challenges was moving the ball around the field until a scoring opportunity opened up.

“We need to keep more possession, we are losing the ball too quickly,” Giovannoni said.

After about half an hour of back and forth play, Mountain View scored the first goal off a corner kick. Eager to retaliate, the girls came out stronger with their offence after re-grouping during half-time. But while the Eagles gathered more energy, so did the Spartans, and they ended up scoring their second goal shortly after half-time.

With the score at 0-2 and the game nearing its end, the agitation to score grew for the Eagles. The girls started to pick up the speed, successfully breaking away from Mountain View and holding more possession of the ball. With 10 minutes remaining in the game, the team caught a lucky break when a Mountain View defender unexpectedly kicked a clean shot past Mountain View’s goalie, resulting in an own goal. Despite Los Altos’s smaller presence in the bleachers, they excitedly cheered with the hope of scoring one more goal to end the game in a tie with the Spartans.

Unfortunately, their hope was soon extinguished when Mountain View scored their third goal just minutes away from the game’s end. Trailing by two points and with such little time left in the game, the Eagles’s fighting mentality started to wear down and the game ended with a final score of Los Altos 1, Mountain View 3.

Although the team suffered a loss, they remain optimistic knowing they can reflect on this game to improve for their future games. Their next game is an away game against Santa Clara on Friday, February 7.

“Although we don’t have the strongest record right now, we continue to go into our games with a positive attitude,” Junior Brooke Lang said. “With only a few more games left in the season, this is the time to really bring our all.”