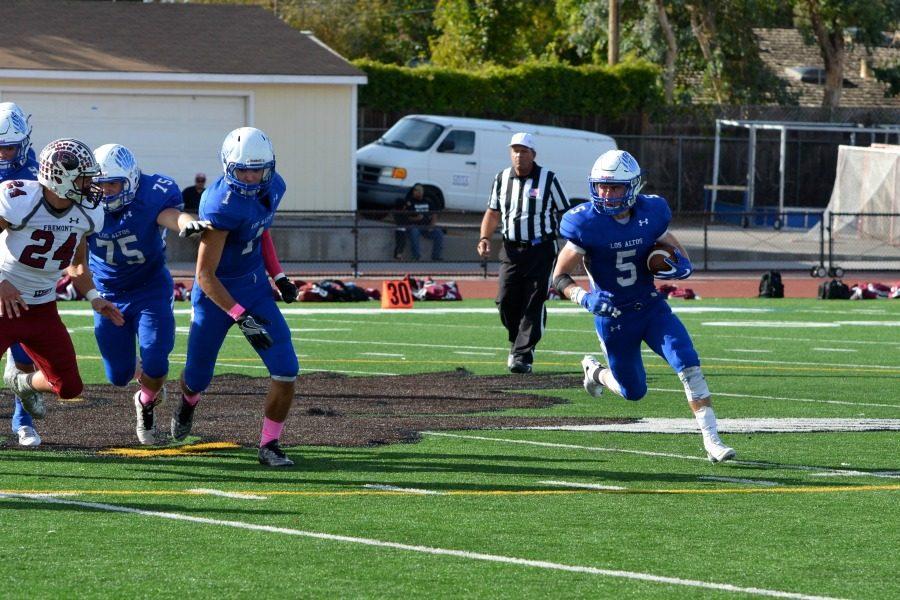 By Nathan Godderis and Brian Huebner

Last year, the varsity football team ended the season with a shaky 4-6 record, finishing in the middle of the El Camino League standings. However, this season the team is reaching heights no one ever expected — they currently have a 5-1 record with four games left to play. What did they do to become so dominant?

Surprisingly, Los Altos’ success hasn’t come from the addition of individual athletes with raw talent. In this case, it’s the team chemistry that makes the group stronger as a whole.

“[At the beginning of the season], I had a feeling that this was going to be a good team,” co-captain senior Jordan Auerbach said. “I felt like I knew the people next to me. I knew they would put as much on the line as I would, and I knew we were all going to go 110 percent all the time.”

Another reason for Los Altos’ achievements thus far is a large improvement to its defense from last year, which is helping to bring out the most from its talented team, thanks in large part to tackle senior Tonga Keti and the unity of the team.

“On defense I see that we’ve been swarming to the ball way more,” Jordan said. “You’ll see tackles this year with seven players on the running back or receiver, and we always force the run in, which is always a big factor for stopping the run on defense.”

One of the highlights of the season for the Eagles was their 12-9 win over rival Mountain View High School. After losing against them twice in the last season, Los Altos managed to bounce back with a strong performance, beating Mountain View and bringing home the Pride Bowl.

“Our defense [in the Mountain View game] was on point. Our offense was on point,” Tonga said. “Our tight ends [were] on point, we were all on the same page, and we were all communicating well.”

On October 8, the Eagles lost to Homestead 13-18. They were disappointed but won’t let the defeat hinder them in the games ahead. The team believes the loss was the result of their week off.

“We went one week without being able to play, and it allows guys to try to take it easy,” co-captain senior Max Higareda said. “Our offense had trouble picking up where they started from since our last game.”

The season is only halfway over with plenty of games left to play, and the Los Altos varsity football team has proven itself a strong contender. They are convinced they have what it takes to be the champions of SCVAL and potentially qualify for CCS.

“Every week we want to go 1-0,” Higareda said. “Our ultimate goal is CCS playoffs, [and] I think it’s realistic for us.”