Varsity football Homecoming game: You can take our victory, but you can’t take our spirit 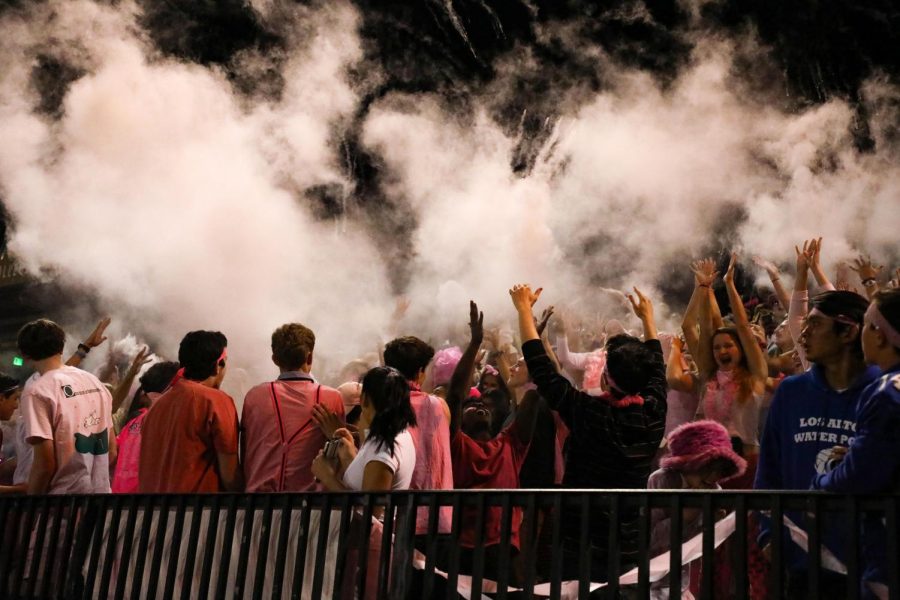 By Cameron Cox, Katrina Arsky, and Amid Najmi

A soft, rosy cloud of baby powder flew over the vividly pink stands filled with Los Altos Eagles during the varsity Homecoming football game on Friday, October 25. The Eagles lost to the Saratoga Falcons through impressive individual efforts that failed to come together for the win. The Falcons beat the Eagles 14-48. 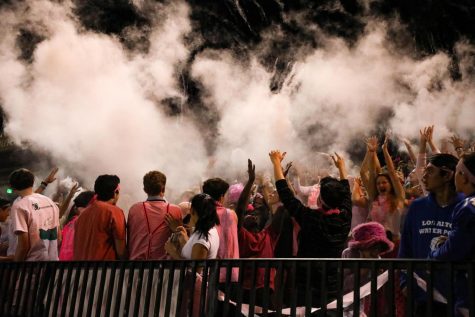 For the varsity football team, the third time was not the charm. But despite losing the third Homecoming game in a row, most people in the chanting crowd seemed to have a positive Homecoming experience. The Mean Girls theme of wearing pink in honor of breast cancer awareness created an energetic atmosphere, as Eagles decked themselves out in the bright color. With senior night celebrations for the Los Altos football team, stunning halftime performances and a comical Homecoming court reveal, the spectators of the game were not deprived of a high-spirited game.

The game was prefaced with an emotional touch as the Los Altos team celebrated their 13 seniors in a heartwarming ceremony. The rest of the team lined up to create a pathway that the seniors strutted through arm-in-arm with a friend or family member. Meanwhile, announcements of the team’s favorite memories were broadcasted throughout the stadium.

“It’s my senior night, so it’s definitely personal,” guard senior Hayden Clish said. “I want to make these last few games of my senior season and my football career count.”

Despite being new to the coaching staff this year, the sight of the graduating players was a significant moment for head coach Dave DeGeronimo.

“I’ve gotten to know these guys and it’s really a brotherhood,” DeGeronimo said. “It’s definitely an emotional and important night for everybody because it’s Homecoming as well.”

Emotions were certainly high, as the game began with an immediate touchdown for Saratoga about eight minutes into the first quarter. On their next drive, the Eagles followed up with a touchdown and secured a one-point lead by successfully making their kick. The Falcons were quick to retaliate, sneaking up to the two-yard line from the end zone with a screen pass and securing their second touchdown in the following play. The first quarter concluded with the Falcons up 8-13. 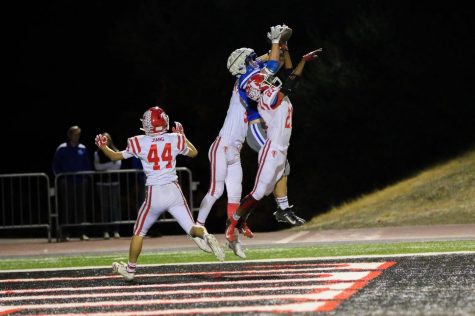 The stands shook with a roar of excitement as quarterback junior Charlie Kinne hurled a 20-yard pass into running back Cedric Smith’s waiting hands at the start of the second quarter. Yet, after an unsuccessful conversion by Los Altos, Saratoga took over for a drive punctuated with four penalties—three against the Falcons and one against the Eagles.

Despite the lost yardage, the Falcons were able to score a third touchdown with a long pass over the heads of the Eagle defense.

“Saratoga is a team that throws the ball a lot,” DeGeronimo said. “It’s a changeup on defense in terms of our strategy.” 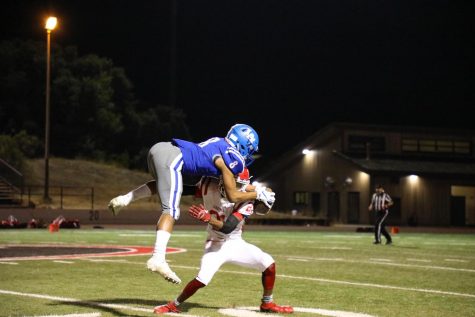 After an unsuccessful drive by Los Altos, Charlie completed the conversion with a powerful kick to the Falcons’ eight-yard line. Saratoga then completed a lengthy drive that concluded with another long pass that flew to the end zone. Later on in the quarter, the Falcons found yet another opening in the Eagle defense for their fifth passing touchdown. By the end of quarter two, the Eagle bleachers were energized by the sight of the scoreboard which glared 8-27.

With the festivities of halftime, a renewed vigor was infused into the Eagle crowd, who were fully awake when the dance team lit up the field in an energetic routine. The performance was coupled with an impressively advanced cheer routine, whose stunts elicited ooh’s and ahh’s from the crowd. The marching band and color guard were not to be outshone, as they demonstrated their coordination in a remarkably lengthy musical performance.

A burst of delighted cheers echoed from the stands as the top 20 seniors on Homecoming court were then introduced to the spectators. The distinguished seniors walked through the color guard’s tunnel of flags as their achievements and involvement in the school were announced over the loudspeaker. 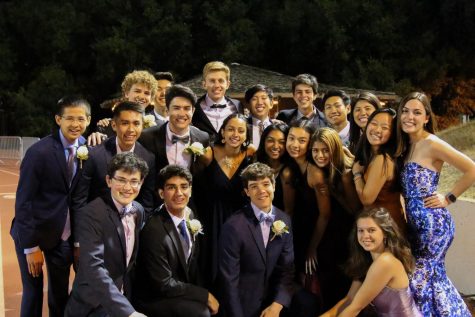 The faulty broadcast that left out major chunks of the script added to the comically disorganized feeling of the event. As seniors Daniel Ghasemfar and Greg Corn marched together across the field, the crowd burst out in laughter at their exaggerated struts. Another highlight of the night occurred when Elena Mujica and Jiayan Luo did the “bust down” dance move to the amusement of the crowd. 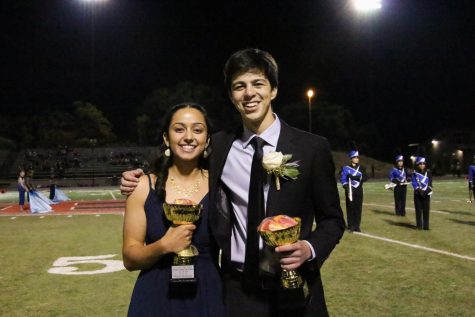 After Kayla Brinkman and Greg Corn were dubbed as the top two seniors, the crowd welcomed the football team back onto the field in high spirits.

At the beginning of the third quarter, Saratoga had to redo their onside kick after their first attempt failed to reach the required ten yards. The Eagles’s drive was then interrupted by a snatched interception by Saratoga in the end zone. The touchback conversion to the Falcons put the ball all the way on the Eagle 20-yard line. 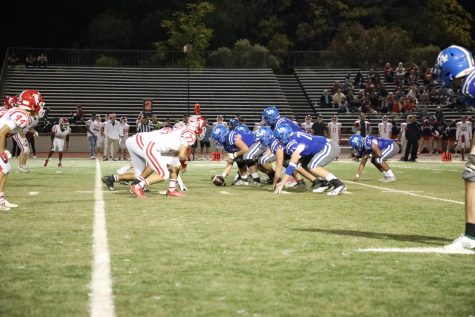 Saratoga’s drive then mainly consisted of screen and dump passes, where the Saratoga quarterback fired a pass to their open running back immediately after the snap. This strategy proved successful, and with five minutes left in the quarter, the Falcons ran the ball for a fifth touchdown.

The crowd went wild as an evasive play by running back junior Aaron Parker took the ball to the Eagles’s 40-yard line. By the fourth down, the Eagles were 63 yards from the end zone, making Charlie resort to a desperate punt. A fluke in the kick flung the ball backward, throwing off both the Falcons and the Eagles. In a mad attempt to recover, Aaron picked up the ball and tossed it to Charlie, who ran the ball out of bounds back to where he had kicked. 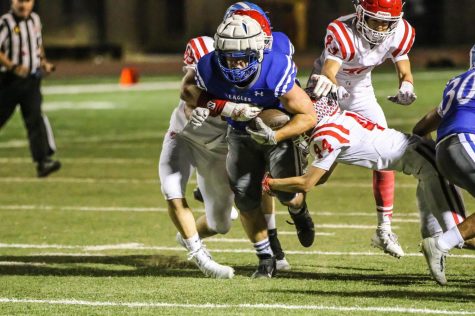 The conversion ended in disaster for the Eagles, who were forced to defend the Falcons on their own 10-yard line. A rapid scoring pass gave the Falcons another touchdown, ending the third quarter with a score of 8-41. The Eagles were beginning to see the severity of the score, as they recalled last year’s disheartening 13-14 loss to Gunn.

“I think [this game] is pretty personal because last year we lost ours,” defensive end junior Jack Clish said. “We don’t want to do that again. We’re going to go on and try to win this.”

The Eagles launched into the fourth quarter with a change in strategy. By putting in junior Michael Marras as running back and Aaron as quarterback, Los Altos was able to bring the ball to the 16-yard line. This put Charlie in the opportune position to run the ball into the end zone to the delight of the Eagle fans. After a failed point conversion, the score stood at 14-41. 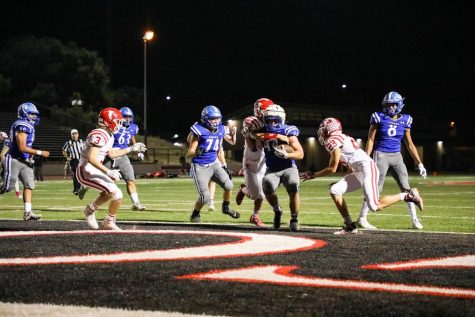 The Falcons quickly retaliated by using the Eagle’s failed onside kick to gain yardage. They completed a long pass to the end zone, furthering their lead to 14-48. With just seconds left, the Eagles desperately attempted to run the ball for a touchdown using running back junior Kapono Elpedes. However, they were not able to evade the Falcons’s defense and reach the end zone.

“I think our camaraderie on the team has been pretty good this year,” Jack said. “Everything’s kind of new, like the coaches. But the guys have stepped up and done [their] job. We’ve just got to work out some kinks.”

Los Altos plays their next game at Lynbrook High School on Friday, November 8.