Varsity field hockey loses to the Wildcats in CCS semi-finals 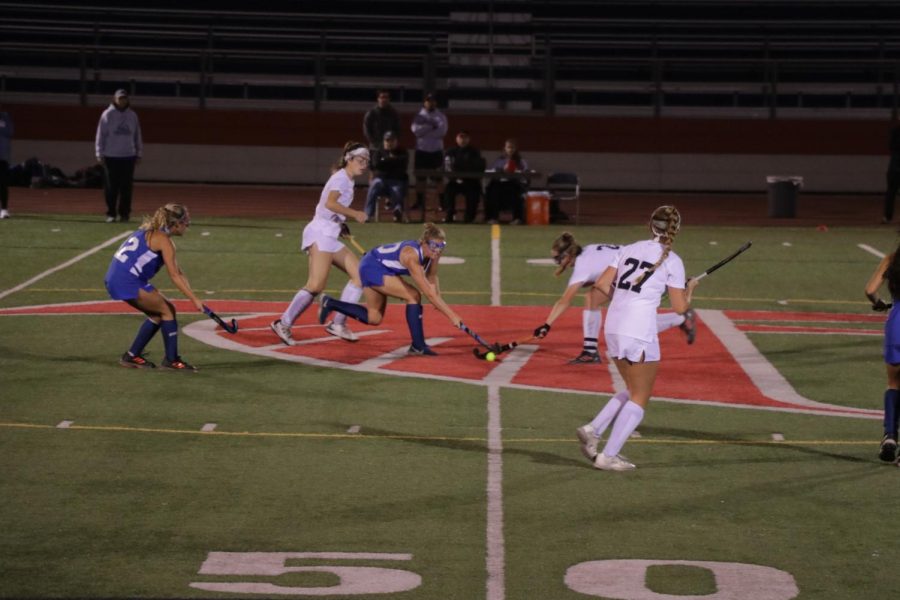 Varsity field hockey made it farther in CCS finals than they ever have before. In the past four years, the Eagles were the only team to bring Los Gatos into overtime and the only team to score against them, so they flew into the game with high hopes. But, they were sorely disappointed when they lost 0-2 on Wednesday, November 13, in a game that pushed the crowd to the edge of their seats and left the Eagles without another shot at redemption until next year.

“Before games, we do a scream circle and a cheer, and today was the loudest one I had heard,” sophomore Isabel Van Campen said. “We put our heart and soul into the game, and I’m really proud of us.”

Just two minutes into the first half, the first short corner of the game was given to the Eagles. A short corner is a penalty hit from the base line next to the cage rewarded when the opposing team fouls a player inside the scoring circle. Short corners often occur consecutively, which allows a team several good chances at scoring.

However, this turned out to be one of the Eagle’s weakest areas during the game and arguably was the reason their victory was stolen. Because Los Altos changed their formation for short corners just a couple days before, there was some difficulty and confusion in acclimating to their new roles.

Isabel explained that to prepare for such a physical fight, the girls practiced and added plays specific to the Wildcat’s formation to get past their wall of defensive players. Often they have their whole team attacking rather than just the forwards unlike many other teams.

“Yesterday we practiced situations with free hits and how to react to their unique style of playing,” Isabel said. “We knew today was going to get crazy, so we practiced hard the last two days and faced them with all we had.”

They were more prepared for this game because they had played the Wildcats previously in the season, and were not shocked when the Wildcats would shove them and not get fouled.

In fact, the crowd got so rowdy about unfair fouls that the head coaches from both teams and the referee stopped the game to warn the crowd that any more comments would cause the game to discontinue. Though continuous snickering and criticism made under the breaths of parents persisted, the screaming was brought to a halt.

Just eleven minutes into the first half, Los Gatos scored their first goal. The whole game was a race for the Eagles to win back that goal, but when they scored again with seven minutes left in the game, it would have been almost impossible to make a comeback.

The team also struggled to stay focused toward the end of the game. With the anticipation of the game’s final minutes, the girls were becoming increasingly flustered.

“I think the weakest parts of our game were when we let the other team’s success get in the way of our focus and cooperation,” junior Audrey Beonnighausen said.

Despite these drawbacks, the Eagles are ecstatic that they qualified for the semi-finals and hope to make it even farther in the years to come.

“We didn’t win, but that doesn’t mean we walked off the field with our heads down,” sophomore Diya Gupta said. “We were emotional, but only because we knew it was the last time we would all be playing together with this exact team.”