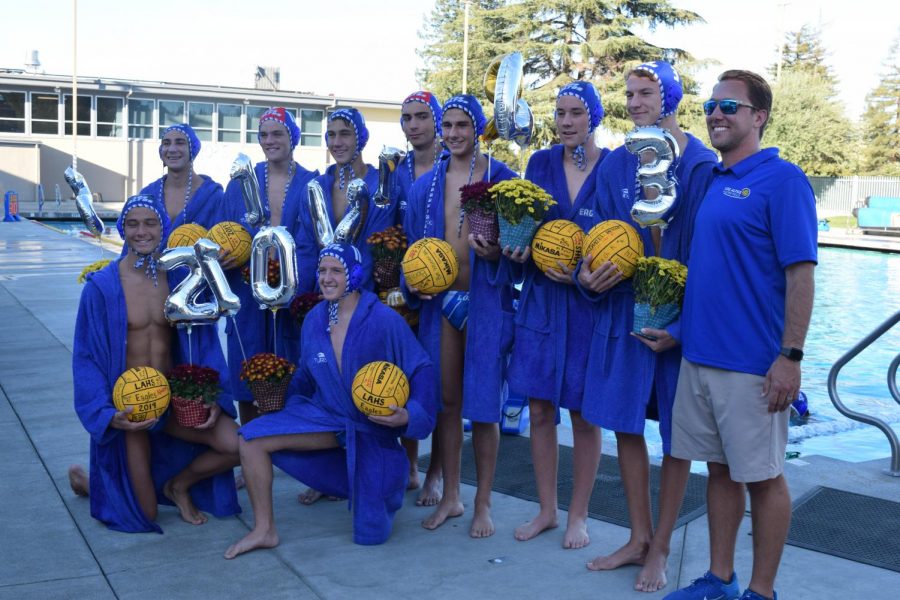 On Tuesday, October 22, varsity boys water polo played against Gunn on their senior day. After the match, each senior was individually recognized by head coach Seth Tasman.

The team has 10 seniors in total, making up over half the team which consists of 17 players. The seniors take on a strong leadership role, fostering a supportive team in and out of the water.

“Our senior class has worked hard and committed themselves to our water polo program,” coach Seth Tasman said. “They do a great job of keeping our underclassman focused in practice and getting everyone pumped up before games.”

This year’s seniors have greatly influenced the team. Whether it’s giving other players advice or by being an example, the seniors have their teammates backs.

“I’d say our seniors are a key part to our team this year,” junior Joseph Feldman-Peterson says, “They teach us a lot on technique especially, guiding us to be better teammates and players each day, and inspire us to be the best that we can.”

During the ceremony, Coach Tasman gave speeches about each of the seniors. He spoke about what the seniors currently do in the Los Altos High School community and what they wish to pursue after graduating. 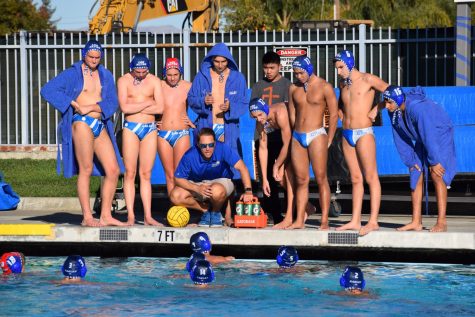 “I’ll definitely miss playing with my friends, doing what I love to do, and being part of a team, being part of something bigger than me,” senior Adam Hollingworth said. “I’ve learned a lot this season, both from my coach and my teammates, that I’ll be able to take with me into the future.”

With the sun high over the pool, the crowd began settling into the stands, preparing to watch the anticipated game. The stands were packed full of relatives and supporters of the varsity boys water polo team at Tuesday’s game against the Gunn Titans. As the referees blew their whistle to signal the start of the game, the crowd cheered, rooting for their school. As the game progressed, the Eagles led 10-5 at half time and finished strong with a score of 19-8.

Though Gunn scored the first goal of the game, Los Altos quickly made up for lost ground. Within the first quarter, the players scored four goals, only allowing one more to slip through.

Wrapping up the first quarter, the Eagles led 4-2, with senior Alex Brett scoring two of their four goals. Senior Kyle Johnson starts off the second quarter with a goal. As the quarter progresses, senior Adam Hollingworth scored two goals and junior Bar Weiner secured one.  Before the first half ends, the Eagles score two more goals, finishing up at 10-5.

The Eagles vigorously protected their lead into the third quarter, blocking any attempts at scoring, and wrapped up the quarter 16-5. During the fourth quarter, all seniors were out in the pool, getting Los Altos three goals. Alex Brett and Adam Hollingworth each secured a goal.

According to junior Bar Weiner, Alex Brett had a “really cool play” where he swam towards Gunn’s goalie and spun around him. By using this maneuver, he was able to evade the player and swim the ball directly into the Titan’s goal.

The team finished the game with an 11 point lead with a final score of 19-8.

Varsity boys water polo is currently undefeated 11-0 in their league and 19-0-2 overall, ranking first in the De Anza division. Each game brings the players closer to the SCVAL semi finals on Thursday October 31 and CCS quarterfinals on Saturday November 9.