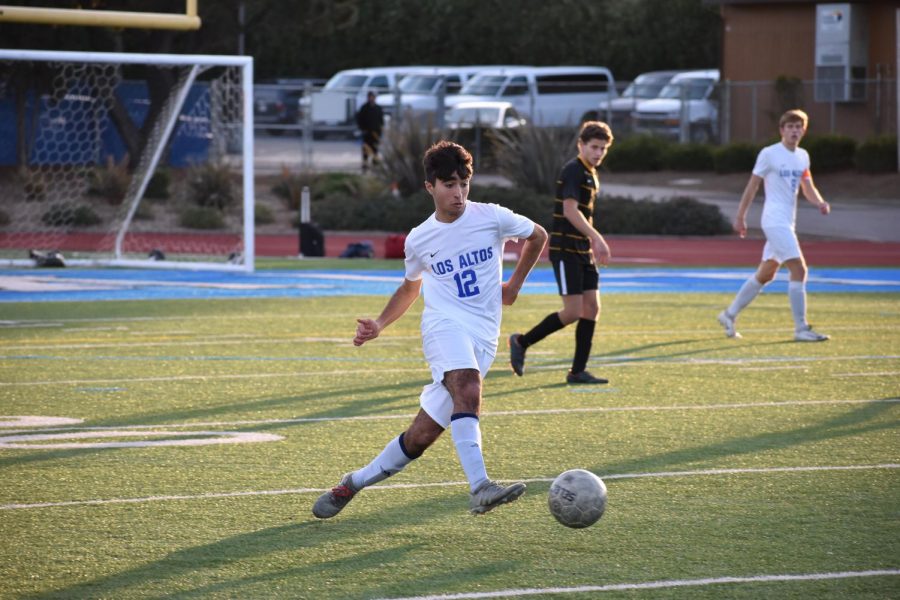 Sophomore Arya Hatami sprints forward and passes the ball upfield after stealing it off a Mountain View player.

During brunch last Friday, many onlookers gathered around the quad in order to enjoy the typical brunch activities hosted by ASB. However, through the speakers came a repeating announcement, one that encouraged all students to come out later that day to watch the varsity boys soccer take on Mountain View. Not only was the game announced in person, but also across various social media platforms such as Instagram and Snapchat. As one of the most advertised games this year, many students knew this wasn’t an event to miss, and the anticipation for the game only grew as the time until kickoff shortened.In the days leading up to the game, the team took the time to reflect on and strengthen specific parts of their play-style. After losing 0-3 to Homestead a few days prior, most of their practices focused on improving their areas of weakness, in particular their defense.

“Our midfield was slow at getting back and defending after they lost the ball,” team captain senior Jack Chmyz said. “We did practice drills that focused on having enough defenders back so we would be ready for a counter attack.”

They knew that the Mountain View game would be one of their toughest. With a 7-1-2 overall record, Mountain View has one of the best records out of all SCVAL teams so far this season. According to Jack, the key to winning is to be patient and smart when moving the ball around the field.

“Our goal for this game is to keep possessing the ball in the final third,” Jack said. “This will help us have better opportunities and shots on goal.”

The sun beamed down on the bleachers and the excitement amongst the crowd increased as the team prepared to start the game. As seen from the rigorous warm ups and the excitement from the field, the Eagles were pumped up for the match. Since both rivalry games last year resulted in a tie, the team was determined on winning their first game against the Spartans on home turf.

The game started off relatively slow as possession of the ball bounced back and forth. Los Altos had their first major opportunity to score when junior Ethan Apfelberg broke away from Mountain View defenders and missed the goal by a couple of inches.

During the second half, the Eagles were extremely strong defensively. This boosted the Eagles’s morale as the Mountain View forwards were constantly frustrated and upset after repeatedly losing possession of the ball. Sophomore Arya Hatami managed to stop a Spartan fast break by stealing the ball from the left wing, and time after time sophomore Mathis Blanc snagged each ball kicked in his direction by the forwards. Each defensive stop brought cheers from the stands.

Although their defense was strong, Los Altos started fouling the Mountain View players more often during the second half compared to the first. The Spartans received several free kicks as a result of penalties given, and each of their shots came closer to scoring. A moment of suspense filled the air as a Mountain View player leaped up to head a perfectly placed ball in the eighteen yard box, but the crowd was quickly met by a wave of relief after the ball ricochet off of the goalpost back into Los Altos’s possession.

Throughout the second half, tensions between the two teams began to rise due to the frustrations towards the amount of fouling that was happening. In one instance, a Mountain View player had to be taken off the field due to a leg injury, while other times players would try and fake injuries in hopes of earning of free kick.

The amount of tension between players gradually began to increase, and soon enough harsh words were exchanged between the teams near the end of the game. As soon as Jack realized the situation could escalate to a physical confrontation, he quickly pushed Arya away from the heated argument he was having against a couple of players from Mountain View. After the team’s suspension from CCS last year due to poor sportsmanship, there was no reason to lose that privilege again so early on in the season.

Los Altos had one final chance at scoring when an offense player had a fast break but unfortunately missed the net with a mere close shot. The whistle signalling the end of the match blew afterwards, and the final score was 0-0.

The Eagles have an away game this Friday against Santa Clara.