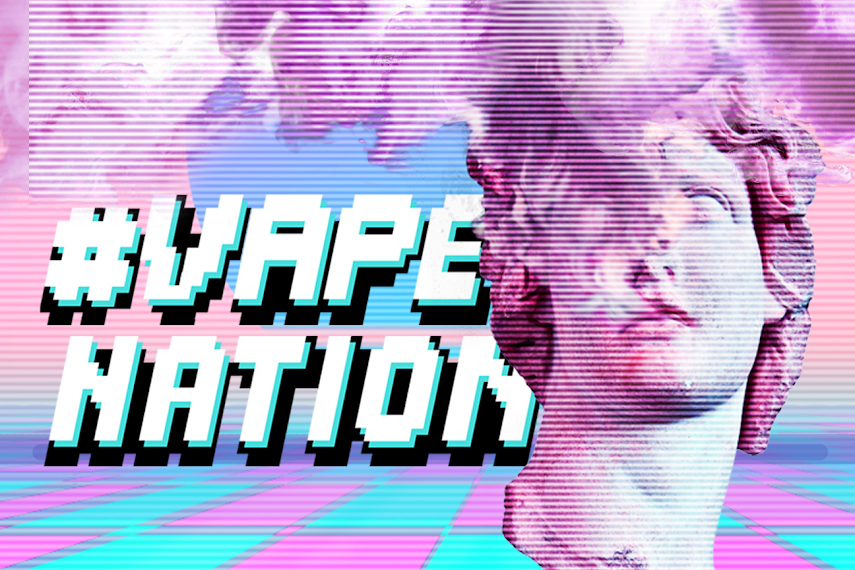 What Has Caused The New Vaping Culture at Los Altos?

I did it because it seemed harmless. My first, real-life encounter with vaping was in the backseat of a car. The friend sitting next to me rolled down the window and pulled out a small, red device from his pocket. He put it up to his mouth, pressed a button and inhaled deeply. He held his mouth closed for a second or two before he stuck his head out of the window and blew out white smoke.

“We get it, you vape,” joked one of the our friends in the passenger seat. We all chuckled. I was told there wasn’t any nicotine in the juice, so I asked my friend what was the point if you didn’t get anything out of it. He said it was fun. I thought it was stupid. But later that night, I found myself puffing out smoke more times than I’d like to admit.

There was no headrush, nor did I get high, but for someone who rarely even smoked weed, the act of blowing out smoke was thrilling. And, at the very worst, it was harmless, right?

While California has prohibited vaping for anyone under 21, the new drug has become a widespread occurrence at Los Altos. The technology — most popular among teenagers — seems increasingly less of a fad and more of a culture.

“A lot of people probably feel much more pressured to take part since it’s becoming the most common way to connect and socialize with peers,” an anonymous Los Altos  student said.

And while the chemicals smoked — say, nicotine — are often what make drugs so addicting, Los Altos students who vape cite reasons beyond chemical addiction. Accessibility and convenience, vape tricks and flavoring have made vaping the “it” thing to do.  Most importantly it’s clear that vaping has emerged unmarred by the social and health stigma around cigarettes.

Vaping is seen as an accessible and convenient alternatives for other substances. For high schoolers, getting a Juul is easier than one might think. According to an anonymous Los Altos student, “there are some establishments that don’t card so you can just go there and buy the device.” Still, it is not unusual for some students at Los Altos to have a fake ID — if you don’t have one, your friend probably does.

Because Juuls and vape devices are advertised as non-harmful, the trend feels similar to the 20th century’s explosion of cigarettes. They have become a regular installment in many students’ daily lives, and, at least in schools beyond Los Altos, addiction to vaping can be an issue.

“I tried to go a week once without [Juuling], and it was really hard for me,” an anonymous student who doesn’t attend Los Altos said. “I think I only lasted about four days, three days. I think it’s an addiction. But it’s something I have control of somewhat, I can choose to not [Juul] for the day, but it’s something I prefer to do.”

To teenagers whose lives depend on other forms of technology, whether it be laptop or phones, the modern and futuristic designs appeal to them more than cigarettes or other drugs of the past.

“[E-cigarette companies] are trying to get the youth, and it will re-normalize cigarette smoking,” physician Sarah Roberts said. “I grew up in an era where people talked about how bad cigarettes were and we saw a big decline in the use of cigarettes over those years, but now it’s becoming more acceptable and that’s a problem.”

Moreover, some who actively vape find themselves having to find jobs, as vaporizers in the Bay Area can be as expensive or more than previous drugs. Priced at around $50 a device and around $30 for a four-pack of pods in the Bay Area, many students who actively vape must have a job to support their habits. Having enough money to fund this hobby can be more of an issue than getting the actual device.

Because of their discreet appearances — designed to look like normal pens or USB flash drives — these devices are easier to use during school hours, whether in students’ cars during free periods, and sometimes even during class. Coming to class with a “nic-high” isn’t unusual.

There’s no wonder why teens are diving into this culture so quickly, when Juuls and vaporizers make the previously hidden drug experience easier to participate in today.

“These days you have devices like Suorins, Juuls, Batons — little ‘wands’ that just fit undetected in your pocket,” an anonymous Los Altos student said. “The ease of access and purchase these days further adds to the attractiveness of these devices. Also they don’t make you smell.”

The ease of access and purchase these days further adds to the attractiveness of these devices. Also they don’t make you smell.”

Some students that don’t vape find themselves part of friend groups of avid vapers whose habits can put them in uncomfortable situations.

“I have said a couple things [to my friends about stopping],” an anonymous Los Altos student said. “But for the most part, I just stay quiet. It kind of sucks because we’ll be in the car and they’re all vaping and I inhale the smoke too.”

Instead of being behind the scene, vaping has literally taken the front page. On social media platforms, videos of vape tricks have surfaced all across the Explore pages. Smoking and vaping lure in teens who want to try the same smoke tricks they see online. Like a candy shop, smoke shops also offer pods in a variety of flavors and nicotine doses, appealing to their younger demographic.

“[Tricks] are so freaking cool,” an anonymous Los Altos student said. “My sister bought one because she wanted to start doing those tricks.”

According to an employee from a local vape shop in Mountain View, Fatty Zone, many customers often come in to buy vaporizers with nicotine-free juice. A lot of serious vape users are less interested in the headrush aspect of vaping, but rather are more drawn to the motion of inhaling and exhaling smoke — trying all the flavors along the way.

While vaping has shifted the way people use drugs and their accessibility, peer pressure is still a big reason why many teens do it. Many students are aware of their motives — they do it to fit in, not for any of the supposed benefits of the drug.

To administrators, there doesn’t seem to be a statistically significant growth in the use of these devices. The 2017 Healthy Kids Survey which surveyed 973 students in 9th and 11th grade at Los Altos, reported that 3 percent of the 9th graders and 13 percent of the 11th graders that participated had vaped four or more times. To administrators, there may actually be a misconception in the perception of how many people actually vape.

“People are terrible at making those judgements [as] human beings,” Assistant Principal Galen Rosenberg said. “Their perception about how often something happens is not very reliable as a measure of how often things actually happen. And especially with students or anybody trying to compare their perception of the present with the past because people don’t remember the past accurately.”

While it might just seem as if many students are vaping because of the perception at Los Altos, videos and smoke rings in the bathroom still drive other students to this newfound drug culture.

“Vape tricks are essentially a fun thing to do, and satisfying to get right,” an anonymous Los Altos student said. “Some friends and I will just practice our O’s or see who has the best ghost. It’s healthy competition.”

So why does it appear that Los Altos students seem to be leaning more toward vaping instead of traditional drugs? Perhaps the misconception is rooted in the accessibility and aesthetic of vaporizers — students aren’t doing anything more harmful than any other drug, they want to get in on this new trend pushed by peers and by social media and it’s consistently becoming more evident.

It’s clear that as students get older, they vape more. Although some students want to push aside the health risks and age regulations to buy vapes, two pertinent questions still remain: how healthy or unhealthy is vaping, and will vaping become the culture for many students to participate in?

How Safe is Vaping Really?

Initially designed as tools to help adults quit smoking, vaping has now become an activity that 13 percent of juniors at Los Altos students partake in, mostly in faith that this is a much safer alternative to smoking regular cigarettes. But cutting through all the unique flavors and smoke-blowing skills, is vaping actually as safe as many teenagers claim it is?

While there are reasons why some, especially teenagers, may believe vaping is healthier than the alternative, the simple answer seems to be that it’s be too soon to tell.

According to Palo Alto Medical Foundation physician Sarah Robinson, it often takes medical officials a minimum of 20 years to be certain if an ingredient or chemical is carcinogenic. Vapes only came into popularity a few years ago and thus have not received the testing necessary to establish their safety.

Vapes only came into popularity a few years ago and thus have not received the testing necessary to establish their safety.”

From the surface, it appears as though vaping has few, if any, health effects compared to smoking a cigarette — this is one of the main reason teenagers are attracted to this new drug.

“Although it may seem like underage vaping and smoking is becoming bigger than ever, cigarette use amongst minors has gone down —  a fact I would attribute to vaping going up,” an anonymous Los Altos student said. “Although there is nicotine in vapes and that is addictive, many of the harmful, even more addictive substances such as tar are missing from vapes.”

Once a cigarette is lit, the smoke it creates contains over 7,000 chemicals, many of which contain carcinogenic properties. Vape pens have significantly fewer carcinogenic chemicals used in them, making it safer for the person vaping as well as the those inhaling the smoke around them.

Unlike a cigarette, which has a specific amount of nicotine in each package, vape pens give the user the opportunity to choose the amount of nicotine they are smoking. In fact, a vape pen user can choose to smoke only flavorings without any nicotine.

Still, vape companies claim their audience is smokers looking to quit in order to drive their campaign of responsible drug use, their advertisements often speak to a different target: teenagers.  For example, the JUUL pen, a recently released vaping device that has had widespread use among teens, is advertised with bold, flashy colors, showing young people vaping. New flavors like “cotton candy” and “fruit hoos” come out often to attract youth into buying devices. Young people who may never have used a cigarette are now convinced to vape due to their perceived safety.

Moreover, propylene glycol, one of the main ingredients in vape pens, has already been proven to have carcinogenic properties. Medical officials are also concerned that the flavorings found in vape pens can have harmful effects on the body.

The pods containing the nicotine smoked or inhaled are often not well-regulated. Last July, the FDA delayed regulations on e-cigarettes to increase their presence on the market, reasoning that they are the better alternative to cigarettes. In fact, there have been traces of nicotine found in many pods that claim to be “nicotine free.” This lack of regulations can lead to faster rates of addiction. And as smokers become more and more experienced, they are able to inhale a greater amount of harmful substances.

“Studies have suggested that drug use starts with legal drugs and proceeds to illicit drugs,” Robinson said. “And the younger someone starts using drugs, the higher the likelihood of them becoming addicted later in life.”