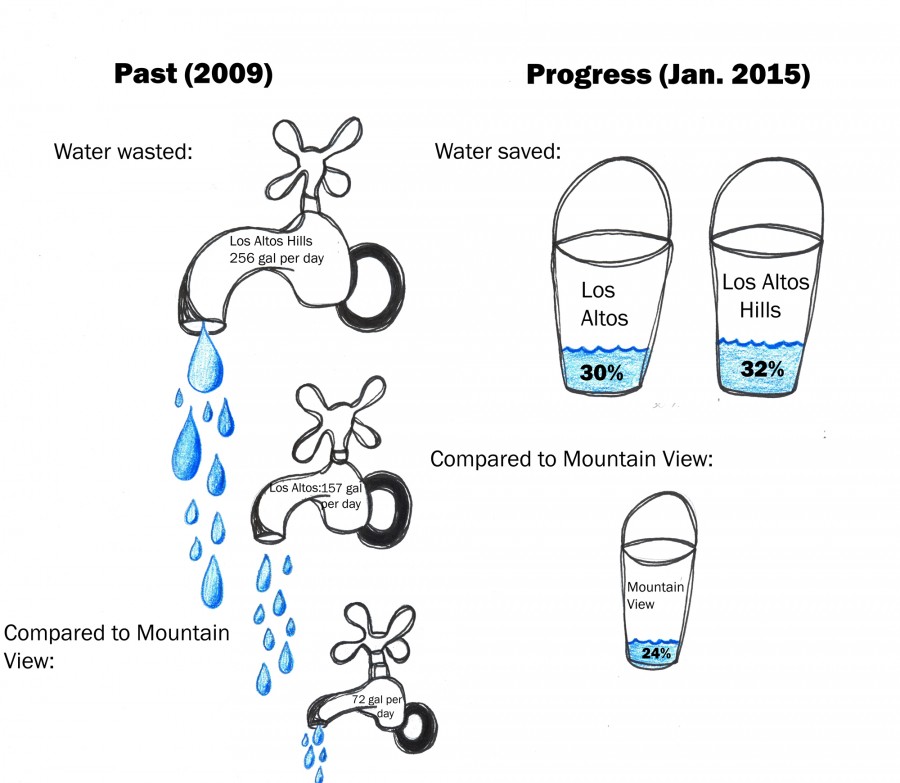 According to the state’s drought information webpage, on January 17, 2014, Governor Jerry Brown declared a drought State of Emergency after three consecutive years of record low rainfall throughout the state. Since 2012, California has experienced extremely dry conditions, with significantly reduced water flow in major river systems and in groundwater. In order to prepare for 2014, projected to be the driest year on record,  Brown issued an emergency proclamation asking all California residents to reduce their water usage by 20 percent.

“The governor’s drought declaration is important because it has been driving all the water agencies throughout California to increase their outreach to their residents and to their businesses,” Senior Water Conservation Specialist for the Santa Clara Valley Water District Karen Koppett said. “It’s been driving [Santa Clara Valley Water District] rebates to increase, to try to incentivize people to change out their old, wasteful equipment, like toilets and washers or to maybe take out their lawn and replace it with more climate-appropriate plants.”

Statistics from the same source also show that 52 percent of the residential water usage in Los Altos in 2009 was put toward outdoor maintenance, more water than was used for toilets, showers and laundry combined.

However, as the drought progressed, Los Altos residents began to save water; the effort was successful, as in 2013 Los Altos reduced its water usage by 34 million gallons, according to data from the California Water Service Company (Cal Water). Furthermore, records from the Santa Clara Valley Water District showed that Cal Water, the main water retailer for Los Altos, conserved 30 percent more water in January 2015 than in the same month of 2014.

“I think that all California Water Service Company [customers], who include most people in Los Altos and some in Cupertino, can be very proud of themselves that compared to one year ago, they’re saving 30 percent,” Koppett said.

Although Los Altos has improved its water conservation since 2009 and since the drought began, the drought is still in effect, and Koppett encourages all residents to continue reducing their water usage.

The governor also initiated a statewide campaign called “Save Our Water” that is working to spread drought awareness and water conservation. The program, created in 2009, is shared between the Association of California Water Agencies and the California Department of Water Resources.

Tips from the “Save Our Water” program for conserving water include collecting the water used for washing fruits or vegetables and then using them to water plants, and installing low-flow faucets and shower heads. More tips like these can be found on its website, www.saveourwater.com.