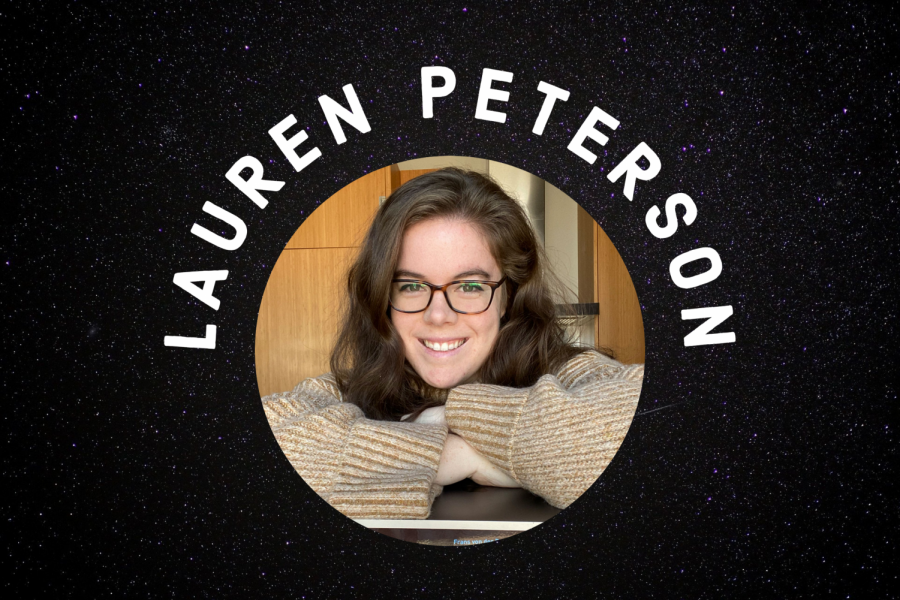 Lauren Peterson, who graduates from Northwestern Law this year, is the upcoming author of “The Future of Governance in Space,” an introduction to the nebulous field of space law. Forging her own path while studying the niche subject, Peterson has found her life’s passion and hopes to be on the industry’s bleeding edge.

By Kaavya Butaney and Olivia Hewang

Space law, the final frontier. This is the voyage of space lawyer and upcoming author Lauren Peterson, LAHS ’11.

So, you may ask, what’s a space lawyer? You’re probably imagining an astronaut floating around in space with a briefcase and a fancy white wig, but space lawyers don’t necessarily travel to the far reaches of space — they focus on legal affairs regarding matters such as commercial space treaties and satellites.

Peterson has always been captivated by the mystery of space. As a kid, she would stare at the night sky, wondering what was out there and yearning to explore it up close as an astronaut. She later realized she didn’t enjoy the science aspect of a space career and only decided to reinvigorate her passion from a legal perspective after enrolling in law school.

A career in law wasn’t even on Peterson’s radar until her U.S. History AP teacher Mike Messner assigned her the role of a defense attorney in her class’s reenactment of former President Andrew Jackson’s impeachment trial.

“I remember thinking to myself, ‘Why couldn’t I have been a witness or one of these easier roles?”’ Peterson said. “I realized that a lot of my teachers had identified my headstrong personality and logical way of thinking and decided that it would be a great career for me. That was one of the first times I seriously considered becoming an attorney.”

However, Peterson didn’t land at law immediately. She pivoted from her initial love of archaeology to majoring in international business, but what started her path to law was qualifying for a legal scholars program while working toward her bachelor’s degree at the University of the Pacific.

Throughout her education, outer space was always on the back of Peterson’s mind, and it was in law school that she finally stumbled upon a way to marry her career in law and her fascination with space: the nebulous field of space law.

Her foray into the subject began by buying every book on space law she could get her hands on, listening to podcasts and webinars by space law “celebrities” and cold emailing any expert she could find.

“There’s no formal career path,” Peterson said. “You really have to create the future you want in space law, so here I am standing with a mallet, ready to shape it.”

Peterson currently attends Northwestern Law, which, like most law schools, does not have a space law program, requiring her to get a little more creative with her learning process. She never got a formal “Space Law: 101,” so Peterson dived head-first into self-driven research while balancing the heavy workload of her more generic legal courses. Despite the lack of a clear-cut curriculum, she has received plenty of support from her advisors and professors.

This is where Peterson’s upcoming book, “The Future of Governance in Space,” comes in. Peterson decided to write it after repeatedly hitting the word limit for her paper on intellectual property in space law and Georgetown professor Eric Koester, who was assisting her at the time, suggested she expand her paper. For Peterson, it was the perfect opportunity to indulge her own curiosity and spread the knowledge of space law to all audiences.

“I want to continue learning, practicing, eating and breathing and sleeping space law,” Peterson said. “I want to bring this knowledge to people, whether that be people on the inside [of the field] or people witnessing it on the outside.”

Given that so few people are even aware of this field and the extent of its impact on their daily lives, Peterson focused on providing an accessible introduction to her work for the general public.

Throughout her book, she dually presented her own opinions on the optimal path forward in space diplomacy, including her proposal for the creation of a single judicial body to unify the entirety of international space law, as well as her predictions of what actually lies ahead. Peterson divided “The Future of Governance in Space” into three parts: the history of space law, what is currently happening and what can be expected in the future.

She wrote the book before she even graduates from law school this year and, much to her excitement, has also been invited back to guest lecture at Northwestern on space law.

With all of these new opportunities on the table and her upcoming graduation, Peterson isn’t sure where her life is going next, but she is eager for it all.

“I looked at my career like this,” Peterson said. “Do I want to be the type of attorney that does the same thing every day? Or do I literally want to be on the bleeding edge of legal doctrine and practice? That’s what I want to do. I want to be making moves and blazing trails.”

The exhilaration of developing something novel has often driven Peterson to work at small, innovative companies like Momentous Space in the Bay Area.

“I have a desire to face a new problem head-on, understanding that it’s going to be really tough,” Peterson said. “Having the opportunity to wrestle with it, and come out the other side, that makes it worth it.”

Despite the daunting task of pursuing a division of law with so much untapped potential, the variety of challenges that come with the field ensure that Peterson always has room to expand her horizons. Due to the current rate of technological advancement, especially in the space industry, Peterson foresees a fast-moving career full of ongoing learning opportunities.

“We’re on the brink of the next great space age,” Peterson said. “I want to be at its forefront.”