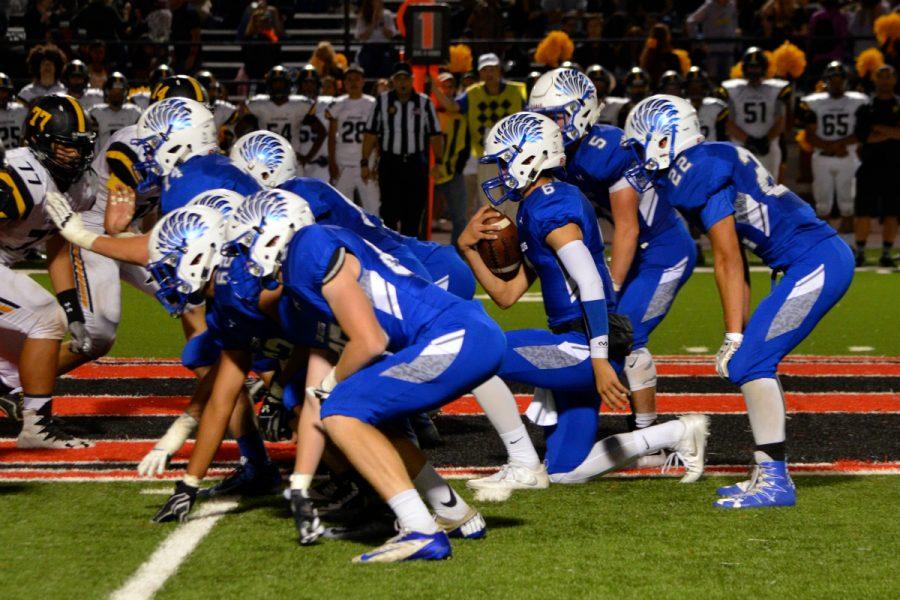 A full moon dawned upon Foothill College as Los Altos and Mountain View geared up to battle one another in an exciting game of football yesterday, September 16. The bleachers filled up on both sides, each spectator anticipating the moment when the ball would finally get kicked. The cheerleaders hyped up the crowds, each cheer more energetic than the next. All throughout the stadium, a feeling of exhilaration saturated the air.

The hype was certainly deserved. The Eagles, prior to this game, went three games undefeated. Led by senior team captain defensive end and fullback Nick Pontius and assisted by hometown favorite senior defensive lineman Tonga Keti (who, before this game, had 3.5 sacks and 7 tackles per game), Los Altos was hungry for a 4th consecutive win. The game was a back and forth struggle between two powerhouse teams fighting for the lead, but Los Altos was able to pull through with a 12-9 victory.

“We stuck to the script. We played good defense and ran the clock,” head coach Trevor Pruitt said.

And with Tonga ripping through Mountain View’s offensive line, it’s no wonder the Eagles put their effort towards defense. Throughout the first quarter, the energetic and explosive offense from the Spartans seemed to be a huge threat on the field. However, due to stellar defense by the Eagles, Mountain View was shut down before they could score.

“Tonga’s a monster man,” junior defensive end Gerardo Garduno said. “We went into this game centered around our defense and the goal to deny Mountain View from scoring.”

Offensively, Los Altos employed the use of a slow-but-steady tactic, with the main goal of running down the clock.

“We tried to keep pushing through [Mountain View’s] defense, and we took whatever opportunities we could,” Pruitt said.

Problems arose for Los Altos during the third quarter, after Mountain View scored a touchdown with an impressive 40 yard run by senior running back Jai Austin, tilting the scales into their favor, 6-9. The Eagles seemed to be slumping on offense, and couldn’t seem to get any meaningful yards.

“Mountain View is a very good team, and their defense is very good. We just had to push through and not lose hope,” Pruitt said.

However, things changed in the fourth quarter. Due to a poorly executed pass play by the Spartans and perfect defense by the Eagles, Los Altos was able to recover a fumble and sprint it into the endzone, putting the game in their favor, 12-9. The crowd went wild, and a chant led by junior Patrick Fina echoed throughout the stands.

The Eagles played with renewed spirits. Their defense looked tighter and more energetic than ever, as if the crowd’s collective energy filled their bodies to the brim. Los Altos was able to prevent the Spartans from scoring, using their practiced slow-but-steady offensive strategy, and ended the game at 12-9, a Los Altos win.

“Everyone did a real good job out there. Everyone did what they needed to do and we were able to pull out a win,” Garduno said.

The next home game for the Eagles will be versus Homestead High School on October 8th.