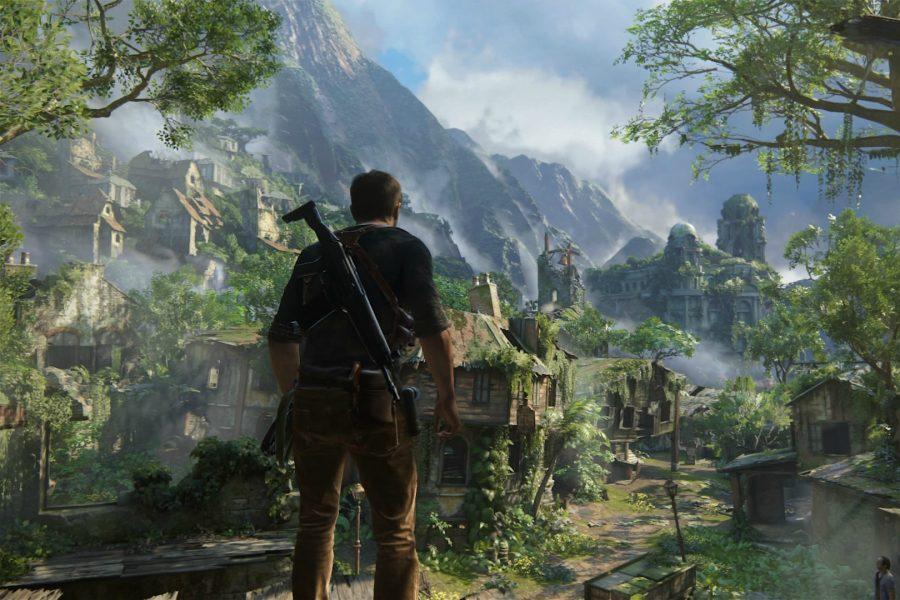 Nathan Drake jumps off a cliff as a grenade explodes behind him, free-falling for a split-second before he grapples a nearby branch. He dangles there, the Italian coastal waters hundreds of feet below. This is not a scripted cutscene, but rather one many actions players can perform in Naughty Dog’s Uncharted 4: A Thief’s End.

Naughty Dog, one of Sony’s first party game development studios, released three hits prior to Uncharted 4 that received perfect ratings from various media outlets. Knowing expectations would be high, the team clearly put everything they had into the development of their newest title. Originally released this past May, Uncharted 4 is now included with September’s new Sony gaming console, the PlayStation 4 Slim. This is a wise move on Sony’s part, for players can start their PlayStation journey with one of the best exclusives the system has to offer. Uncharted 4 is the epitome of the action-adventure genre done right.

The plot centers on Drake, the series’ protagonist. Once a series of intriguing, but painfully slow flashbacks concludes, the game picks up after the third installment with Drake living a normal, married life. Aimless, Drake finds himself paradoxically eager for excitement but set on steering clear of danger. However, he caves when his brother returns fifteen years after his apparent death.

Compared to previous entries, Uncharted 4 experiments more with both the character’s emotion and the player’s. Well-done dialogue and scenes allow players to connect with rather than watch the cast of characters. Throughout the story, both Drake and Elena portray visible regret and emotional pain based on each other’s actions and safety. The interactions between the two, mainly how their trust falls apart and what Drake does to earn it back, are great. Though, they could be even further flushed out by including more powerful scenes, perhaps in which Drake believes he may not get a chance to right things with Elena.

Drake believes obtaining the treasure is the only way to save his brother’s life, making his motives more personal. We see Drake excited about the discoveries he makes, then asking himself the important question of whether he is risking his life for the right reasons. It is refreshing to experience an Uncharted that forces Drake to confront the reason behind his actions instead of blindly risking his life for pride and luxury like he does in prior games.

The game’s most impressive feat is its beautiful and complex, labyrinth like set pieces that are large yet manage to make use of every inch of space. Objectives blend in with the environment, so when an obscure path leads to the game’s next area, players experience a true sense of accomplishment. For example, the player may decide to cross a bridge overhead instead of continuing down a clearly visible road, then discover this was the intended route all along. Levels stray from the linear paths of Uncharted’s past by adding open areas and multiple paths that make the world feel vast and the opportunities endless.

In-game firefights are intense and challenging due to the noticeably intelligent enemies and destructible environments that showcase impressive physics. One of the more memorable fights takes place in a ship graveyard. Players attempting to snipe from the crow’s nest may end up launching themselves into the air due to enemy grenades with the hope of latching on to something with their grapple before smashing into the ground below. Teammates also prove useful; they will grab and expose enemies for you to shoot or assist you in throwing an enemy against the ground.

The game has also placed a greater emphasis on stealth compared to the previous titles in the series, which adds variety to the gameplay by requiring more patience and strategy than guns-blazing combat. Many areas can be completed without engaging the enemies on patrol, allowing the player to decide what steps to take. A large number of enemies are extremely difficult to take on at once, but using stealth, players can pick them off a few at a time. Maneuvering through a situation smoothly and undetected feels very rewarding.

Aside from the drawn-out introduction, the game’s flaws are far and few between. At three points in the game, however, the smooth, default controls are swapped with clunky combat controls that take away from already lackluster boss fights. Unfortunately, one such fight takes place as the game’s finale, which offers a slightly frustrating end to an otherwise amazing game.

That being said, Uncharted 4: A Thief’s End is definitely worth playing, and an absolute bargain as a bonus inclusion in the $300 PlayStation 4 Slim bundle. The breathtaking set pieces and immersive gameplay leave players experiencing Drake’s longing for adventure.