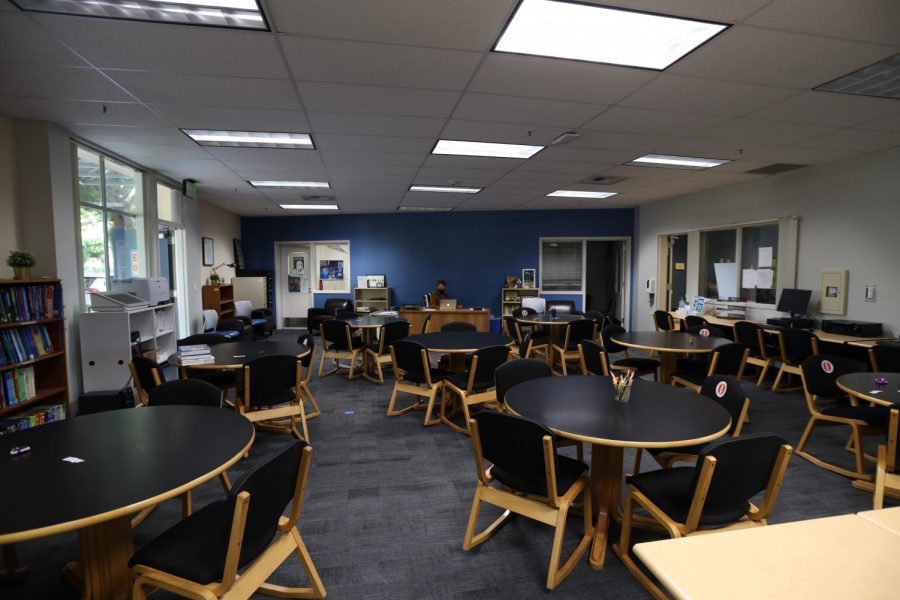 After over a year of distance learning and virtual tutoring, Jacob Valadez, the Tutorial Center Coordinator, will hit the ground running when students return to in-person learning. He has plans to increase collaboration between support groups like AVID, skills and special education to reach students before they fall through the cracks. Increasing representation of tutors and making the physical space more inviting are also on Valadez’s to-do list.

By Parisa Larson and Lauren Morimoto

In past years, the Tutorial Center mainly served as a space for walk-in tutoring appointments and make-up tests, but Tutorial Center Coordinator Jacob Valadez is looking to change that when students return to the physical center this fall.

Valadez wants to add discussion and liveliness into the Tutorial Center. One way he’ll achieve this environment is by introducing more games, books and music. He said the quiet and testing-focused nature of the current center restricts conversation and hopes a more comfortable setting will allow students to hang out and chat.

He also plans to facilitate collaboration between the center and other programs on campus such as AVID, various skills teams and freshman classes who might need more one-on-one tutoring support. By distributing the team of tutors to work with students from these support groups, Valadez said he hopes to use the Tutorial Center to bridge gaps between these independent programs.

“I saw that there are all these groups on campus that are trying to do really good things but they’re all separate,” Valadez said. “We’re trying to shift the Tutorial Center and the coordinator’s role into being more proactive and helping the skills, AVID, and special ed. teams create solutions for the students who they all may be struggling with.”

This collaboration will have to wait until next year because the pandemic has forced Valadez to turn his attention to virtual tutoring. He has been dispersing tutors throughout various teachers’ virtual Zoom classrooms to provide one-on-one support to students in breakout rooms in the given subject.

World studies teacher Christa Wemmer has taken advantage of this virtual format, assigning tutors to work with specific students in breakout rooms and allowing them to move at their own pace through the classwork. She found that the individualized tutoring had a tangible impact on her students’ success in her classes this year.

“Students started getting more comfortable with the tutors,” Wemmer said. “For example, students who didn’t put their cameras on or weren’t participating started to participate a lot more and get their assignments done.”

She attributes the students’ progress and growth to the personalized support the students received in the setting of a private breakout room as opposed to the main room.

“Having a consistent person who cares about your understanding of the material versus just completion allows the student to feel more comfortable,” she said. “I saw a lot of success once I brought tutors in to help with students.”

The promise of improvement has motivated Valadez to foster even more connections between students over the next couple of years, he said. Valadez is currently trying to increase diversity among tutors to make the space more welcoming for students of all backgrounds and proportionate to student populations by making the tutor application process more inclusive.

Valadez made this a goal after completing an annual report of tutor demographics. In the process, he found that in proportion to the student body diversity, there were vastly more Asian students volunteering as tutors in comparison to Latino students, with the number of white student tutors remaining about the same.

“Having tutors who look like you, speak your language and share the same experiences going through school is something that we really want to focus on,” Valadez said. “That’s been a challenge because some of our students think their grades or GPA aren’t good enough to be a tutor.”

His first step in this initiative is making sure that the application process for becoming a tutor is as accessible and widespread as possible. This year, he eliminated the mandatory interview process and GPA requirements, shifting the focus to recommendations.

“I sent out a guideline of what we were looking for in tutors to teachers and current tutors and had them fill it out with whom they’d recommend, so we could invite them next year,” Valadez said. “Our goal is to craft some ways to specifically target groups of students to try and get them to sign up for tutoring.”

Valadez hopes to distribute the selected Tutorial Center tutors throughout freshman courses to aid the incoming freshmen who completed the majority of middle school virtually. He said that by providing more consistent tutoring resources to the class, the Tutorial Center can ease the return to in-person learning.

“We’re hoping to catch more students as they enter school before they really start to struggle,” Valadez said. “If we could get tutors to work with those students right away and build those relationships over the course of their high school career, I’m hoping that will do a lot to fix the problems that come down the road.”

“Hopefully we can really start changing the narrative for this space and what students think of it on campus,” Valadez said. “We are just going to keep getting better at being a place where students can know that it’s okay for them to not know.”