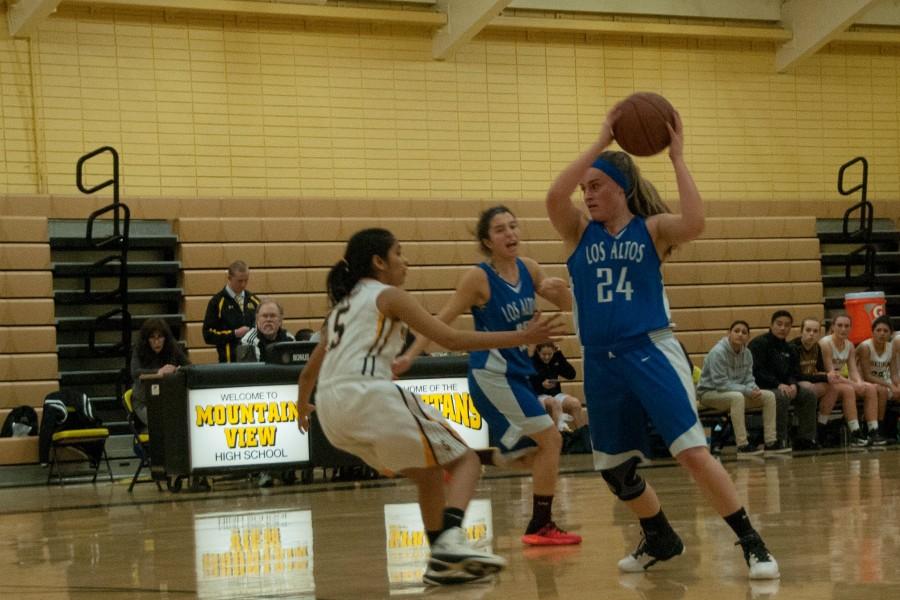 In their second meeting of the season, the girls basketball team took on cross town rivals Mountain View. The Eagles looked to complete the season sweep against Mountain View, however, the Spartans came out to right the ship. After a dominant performance from the Spartans, Mountain View defeated Los Altos by the score of 54-30.

In a sense, the first quarter was a euphemism for the whole game; The Eagles shooters couldn’t find the net, they were turning the ball over constantly and the Spartans were opportunistic on the fast break. In fairness, one of Los Altos’ star players, senior Meg Enthoven, was playing through a heavy illness. Nonetheless, half way through the first quarter, the score was only 4-1. After four straight turnovers from Los Altos, the Spartans were able to score 8 points on the fast break. This gave them an early 11-point lead, which Los Altos was unable to come back from the entire game. Unable to convert a single shot from the field, Los Altos shooters struggled to keep up with the fast paced Mountain View offense. The score going into the second quarter was 14-3 in favor of Mountain View.

Knowing that they had a large deficit to overcome, the Eagles came out with the intent to improve. And they did just that by more than doubling their scoring output of the first quarter.  Led by senior Allegra Maeso, the Eagles jumped on multiple Mountain View turnovers to put on a much improved offensive display. Yet, it was the defensive side of the ball that held them back. Mountain View shooters were finding spaces with ease as they furthered the lead to 16 points by the end of the quarter. Despite the Eagles’ best attempt to get back into the game, the Mountain View shooters were too consistent for any comeback to ensue.

As the teams came out in the second half it was clear that there was two ways the rest of the game was going to go for the Eagles: An inspiring comeback or a disappointing blowout. Unfortunately for the Eagles, it was the latter. Mountain View created most of their chances by crashing the offensive board. Often times, while the Spartans missed their first shot, they were able to convert on second, third and sometimes even fourth-chance points. This was a huge momentum swing for the Spartans as they outscored the Eagles in the third by 15-2, making the score 41-12. It was clear at this point that it was not the Eagles’ night.

“We needed to improve our hustle,” senior Rachel Glein said. “On defense we weren’t talking. At one point it was even silent on defense, which cannot happen.”

To the Eagles’ credit, they never let the point differential sway their effort. Specifically, Allegra and Rachel shined in the fourth with their intensity and spirit. Rachel, who scored 8 points in the fourth, teamed up with junior Audrey Jones to cut the lead from what was once 34, down to 24.  The Eagles defense also held much firmer in the fourth as they made a couple tactical adjustments.

“We started playing a different defense,” Rachel said. “We played a 1-3-1 instead of a 2-3. It helped because they weren’t used to it. But, I think [our improvement] mainly came down to hustle.”

In the end, Mountain View came away with the win by the score of 54-30. The next game for the Eagles will be at home against Palo Alto on Friday, February 5th.

“Playing [Palo Alto] will be a tough game,” Rachel said. “We are just gonna have to work hard in practice and hustle our butts off.”