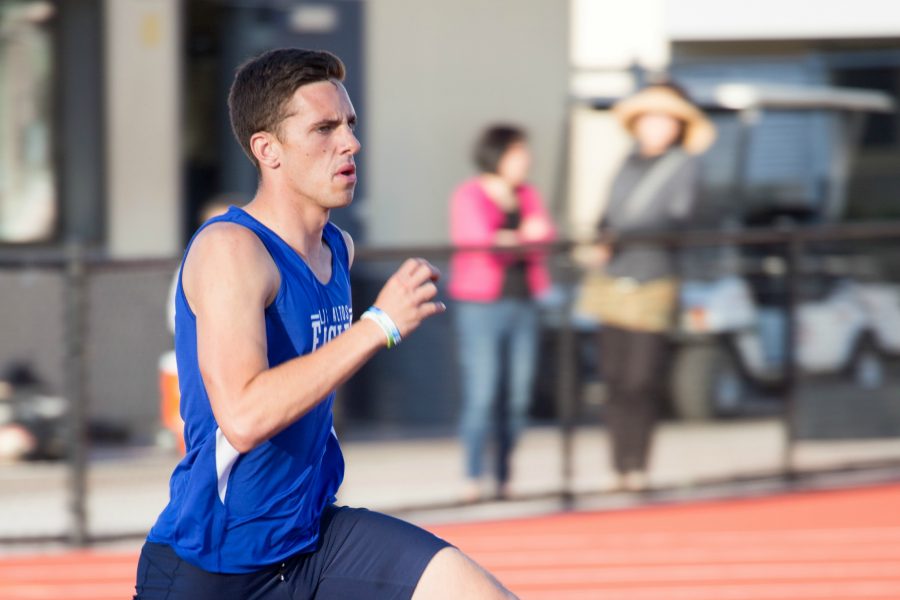 Stepping up to the starting blocks of the De Anza League 400 meter final heat Thursday, May 5, senior Joe Kull found himself alone. Nobody on the varsity track team was in a position to help him in his race, and he wasn’t in a position to help anyone else in theirs. And in this situation, there was only one thing to do.

“I was just focused on helping out the team as much as I could,” Joe said. “Everyone had their jobs to do at the meet and I just tried my best to do mine.”

In the most important meet so far this season, the Eagles put together a near-perfect performance. Joe won his race with a personal record 49.58 time, and every other athlete did their job en route to a dominant win to bring home their first De Anza League Championship since 1999.

Coming into the meet, the Eagles were expected to do well, but a lack of depth in the long-distance races made them far from favorites.

“We knew that it would be difficult and that we all needed to do our best, but everybody really wanted this victory and we were all ready to give our all to get it,” senior Sebastian Cabrol said.

In a meet where all of the team’s leaders need to step up, every one of them did. Senior Bailey Thayer single-handedly racked up 28 points with top-five performances in the 300 meter hurdles, long high jump and triple jump, and won the 110 meter hurdles.

“The team can always count on Bailey to score points,” Senior Ryan Kull said. “He is dominant in his events and he is an inspiration to others on and off the track.”

Sebastian shattered his personal record in the discus and gave Los Altos its third individual win with a throw that beat the second-place athlete by over ten feet.

As crucial as the first-place finishes were, the Eagles found victory in the multitude of second, third, fourth and fifth place finishes that they were able to secure in almost every event. Senior Ben Zaeske ran a personal-record 1:56.50 in the 800 meters to get second place. Senior Kenny Hamel finished third in both the 100 and 200 meter dash.

Junior Tommy Andrews finished second in the long jump and fourth in the triple jump. Ryan and Juniors Tonga Keti and Derek Mark also added points with top five finishes. All told, non-winning top-five finishes gave the Eagles 91 points, which alone would have put them in fourth place.

“One person can not win a league championship in track and field,” head coach David Barth said. “It takes a crew of athletes finishing in top five to win it all.  It’s great knowing so many athletes contributed to the point scoring.”

Prior to the meet, Los Altos hadn’t won the De Anza League in seventeen years. From here, the Eagles will look forward to SCVAL finals next Friday, and after that, CCS and hopefully State finals.

“I think that it will give us a great confidence boost and that we will continue to have amazing performances in the upcoming competitions,” Sebastian said.