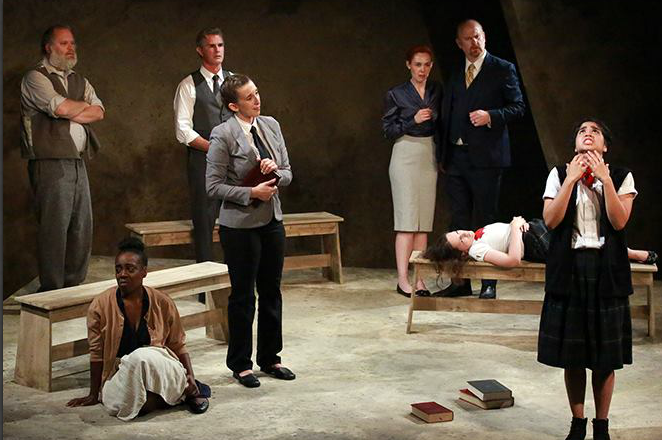 In the Puritan community of Salem in 1692, the inhabitants tore their town apart with paranoia-fueled accusations of witchcraft. In the larger United States in the 1950s, a similar phenomenon occurred as supposed communist sympathizers were made scapegoats, part of a phenomenon called McCarthyism.

And today, the theme of witch hunts and creating scapegoats persist. These dynamics of power and the destructive nature of paranoia is exactly what Los Altos Stage Company aims to portray in their production of “The Crucible” this season.
“The Crucible” is a fictionalized story of the Salem witch trials. The inhabitants of Salem accuse young girls of witchcraft, and these accusations, along with the resulting trials and hysteria, begin to tear the town apart. The play, written by Arthur Miller in 1952 as an allegory for McCarthyism, is widely performed today, with even American Literature & Composition and AP Language classes performing their interpretations at Los Altos.

“[In the play] you have people in power who are willing to punish and make scapegoats of specific groups of people,” Stage Company Associate Artistic Director Jeff Clarke said. “We see that in the Salem witch trials, we saw that in the 1950s with McCarthy and his followers, who were trying to root out communists, and now we see that today with how Muslims and immigrants are being treated.”

Just as Arthur Miller aimed to reflect the paranoia of his present time in the writing of his play, Los Altos Stage Company’s goal is to draw a connection to the current political uncertainty in order to give the play a timely relevance.

“When we were looking at plays [for this season] and considering our options, things started to happen in this world — namely the election of Donald Trump as the president,” Clarke said. “We felt that the idea of hysteria and irrational thinking and blaming one group for problems in an area was something that would resonate with audiences today, given the world we currently live in.”

Delivering these parallels requires rehearsing and performing the play with the context of the plot in mind. This is where Grace Hoffman, the dramaturge for the production, comes in.

A relatively new production role in the United States, the role of the dramaturge provides additional research on a play and its themes in order for the cast to have a greater understanding of a play’s context. With the wealth of context and connections to the modern world “The Crucible” necessitates, Hoffman’s work is more valuable than ever. She compiled research about the play and relevant details for the cast in order to create a more insightful performance.

“It’s important to key in on the relevancy [of a play],” Hoffman said. “‘The Crucible’ is widely performed, and you have to ask, ‘Why are these smaller performances not as impactful?’

“The answer would be that these plays don’t have the context. No one is coming in to talk to [the cast] about McCarthyism, no one’s pushing them to help connect [the play] to their personal lives. With the Los Altos Stage Company’s production, we have done that work. We’ve pulled pieces apart and connected them to what’s happening [today]. And that’s how you create the impact, by making it a little more personal.”

The timeless nature of the production’s design augments Stage Company’s already unique take on “The Crucible”. Instead of a setting that automatically suggests to the reader that the play takes place in Salem, Massachusetts in 1692, the design emphasizes lighting that represents the changing paranoia in Salem and uses contemporary costumes. This allows for a wider interpretation of the play that focuses the audience on the equally timeless themes of paranoia and power Clarke said.

“One thing that our production does that many other productions of ‘The Crucible’ don’t do is that our time period is very nebulous,” Clarke said. “The costuming for the most part is very contemporary. There isn’t a lot of period costume pieces where you look at one actor who’s costumed and think, ‘Oh, that person belongs in the 1950s or 1980s. The scenic design doesn’t create a sense of time period. It instead reflects the Salem society.”

The careful research and contextualization of the play and the timeless setting come together to form a production that is targeted at our current political situation by examining the paranoia and fear of the past.

“It is a tremendous production,” Clarke said. “It was really a herculean piece to put together because there are a lot of actors, and ‘The Crucible’ is both so timely and timeless.”

Los Altos Stage Company has performances of “The Crucible” from September 7 to October 1 at the Bus Barn Theatre in Los Altos.