‘Things That Go Up and Down’: An Environmental Art Exhibit 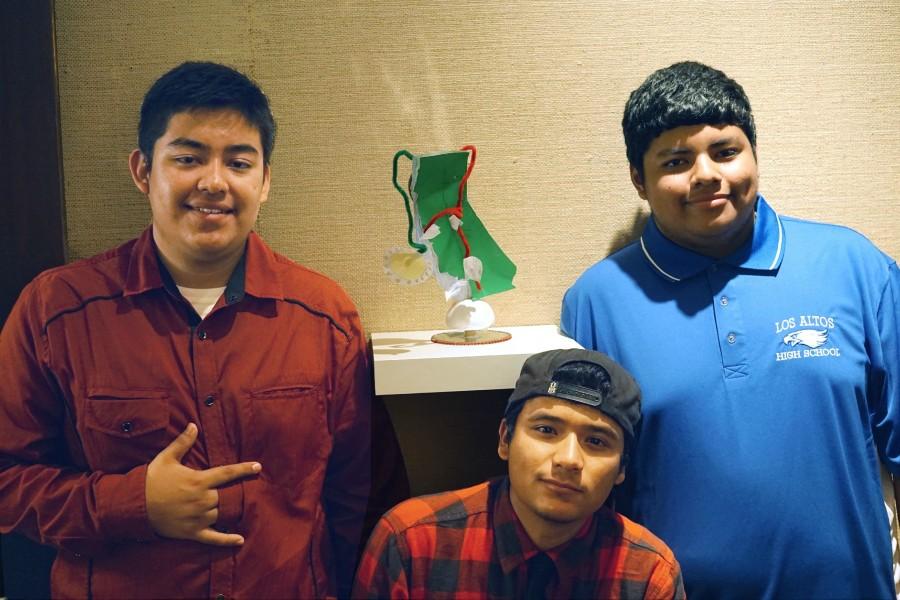 Juniors Ronaldo Flores, Martin Quezada and Luis Arias Diaz pose next to their artwork. The environmental science class's artwork is currently being featured in the "Things that Move Up and Down" art show at the Merchants Exchange Building at San Francisco. Photo by Michael Sieffert.

By Akhil Jakatdar and Michael Sieffert

In a small room on the eighth floor of a bustling San Francisco business district building, quirky moving models with bright colors perch on podiums in the gallery. Soft music plays in the room bubbling with excitement. The high spirits of the students summarize the essence of the event.

Throughout early January, the Environmental Science class, taught by teacher Bobby Soto and former football coach Rudy Alcala, is exhibiting their work in a gallery called “Things That Go Up and Down.”

The art project was created to teach the students through a more hands-on method about the effects of climate change on our environment and how it has detrimental effects in the long run. Through kinetic artwork, or moving art, these students learned much more about environmental science than by being taught a lesson in class.

“I find it extremely cool and amazing to be able to create a project to help us understand different things that can actually affect our planet,” Environmental Science student Alex Chavez said. “It’s truly a great experience.”

The two founders loved art, but they could not find sufficient time or space to promote it, so they started the gallery. From Spare Change’s official website, the goal of the exhibit is “to create an environment where art enthusiasts will better understand personal finances and where everyone will better understand art.”

“We wanted to make a show about moveable art, call it ‘Things that Go Up and Down,’ and then curate with [this class],” Fletcher said. “Bobby Soto approached me, and someone in his class found this call for art and the need for moveable art. Rather than curate a bunch of artists, I [choose] this group of students, and that’s how it was.”

The firm felt like environmental art was the most appropriate form of art at this moment in time as global warming has become a major subject of debate in recent years. Remarkably, Soto and Alcala’s science class was working on a project exactly like that.

“An art contest presented itself through the Spare Change Artist Space Exhibit, where we submitted five kinetic art pieces that related to the the theme, ‘Things that Go Up and Down’ as we are studying up and down climate change in Environmental Science,” Soto said.

The pieces were the result of two weeks of hard work and dedication to create their anthropogenic models of the effects of climate change.

“The end result was an art exhibit where our students had to share the story that their artwork represented about global warming and climate change, which involved the study of fossil fuels, greenhouse gases, COP21 Paris conferences and human activity that causes excess of amounts of carbon emissions,” Soto said.

Starting with understanding the main concept of climate change, the students began building their artwork with the intention of proving their knowledge of the environment through the meaning of their sculptures.

After the artists’ reception on Thursday, many of the artists shared how this project truly tested their limits and taught them more about the environmental science they were learning in class. Many lacked the grasp of knowledge in environmental sciences and had to slowly build it up throughout the process of creating their work. The time restraints were a massive obstacle, and tested the resolve and work ethics of many of the students.

“In the beginning, we [thought] were never going to beat the contest and were not going to make it, but right now, we made it,” Luis said.
For some students, this project and exhibition opportunity inspired them to take a stand in society and to go more in-depth into the field of environmental science.

“I find it really interesting that many people don’t know about this, don’t know what burning a fossil fuel is, [and] carbon dioxide,” junior John Dunn said. “Most people take it for granted… [Now] I’m really interested into getting into environmental science.”

Although the artists’ reception was only available on Thursday, November 19, the exhibit will continue to run through January 8, 2016. The exhibit, which is held at the Merchants Exchange Building located at 465 California St, San Francisco, is free to the public.

“You never know what is taking place in the world until you start learning about it, and now I know more,” senior Zajari Aguilera said.