The world through Gilbert’s eyes 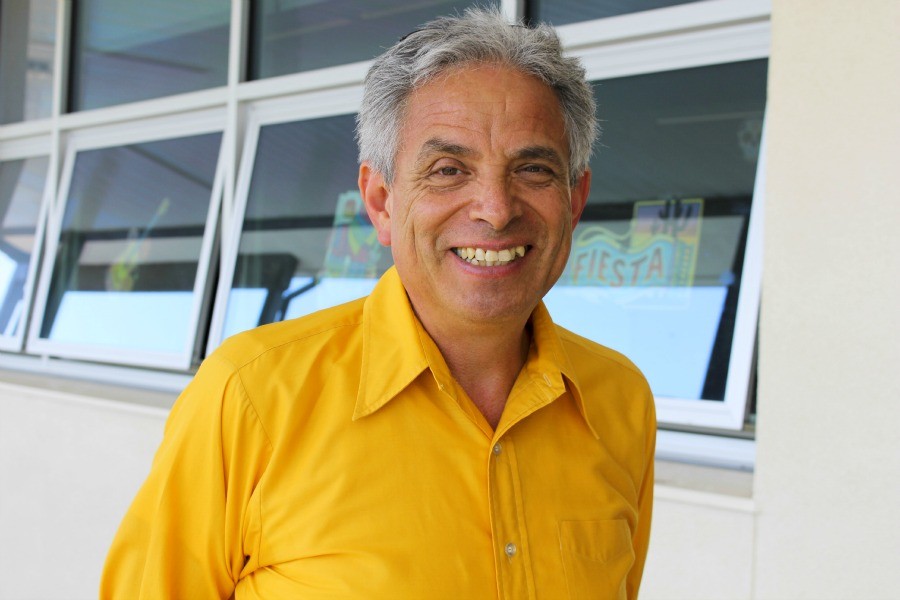 Substitute teacher Gilbert Mercado points to a world map that indicates his diverse heritage. Gilbert fosters an atmosphere of cooperative learning in and out of the classroom. Photo by Kimia Shahidi.

There is an unofficial bulletin of substitute teachers at Los Altos High School — a network of whispers and shouts that warn of the stranger in your next period: the nearly senile sub, the authoritarian sub or the sub that will not take attendance. However, whispers about Gilbert Mercado, a middle-aged, white-haired man with a closetful of endearingly bright Hawaiian shirts, are kept to “he’s really nice.”

The source of Gilbert’s niceness is mysterious considering his youth’s adversity. Born to first-generation Mexican immigrants, Gilbert grew up in mid-century Los Angeles, a period which Gilbert terms as “American apartheid.” Gilbert reminds his students that even California was segregated, not just the South.

“[My father] came [to America] when he was 19,” Gilbert says. “When I was three years old, he said, ‘We’re going to stay in this country, and from now on, we’re only going to speak English.’ I have a distinct memory from when I was three of learning Spanish and English at the same time. I have a hard time staying in one. I feel in Spanish, and I think in English — because I learned in English.”

His mother was a housewife and his father worked in a factory. For fear of contaminated food and water, his parents only fed him boiled milk during his first year of life.  Gilbert believes this contributed to the development of his high-functioning Autism Spectrum Disorder.

Gilbert’s condition comes across not as slowness, but as confusion or raw honesty: an inability to compute the ugly things that he never learned to ignore. His interest in learning began with his kindergarten teacher, with whom he kept in touch for decades after. Gilbert’s investment in learning seems to be as vital to him as tissue and plasma. The sheer force of his passion is enervating.

When Gilbert was 35 years old, administrators at California State University, Los Angeles, prompted him to complete a learning disabilities test because of his chronic struggle with learning. The results indicated that it was only Gilbert’s incredible resourcefulness that allowed him to compensate for his deficiencies in social skill.

“They said that the typical person who comes in to get tested is reserved, shy, frightened, feels insecure and doesn’t have good communications skills,” Gilbert said. “[They told me,] ‘You’re articulate and you have a way with words, and we’ve never tested anyone like that.’ They didn’t know what to do.”

Gilbert seems to physically ache when he considers people who aren’t comfortable in their skin. Before coming to work as a substitute teacher in the Bay Area, Gilbert drove a bus for special needs children in Los Angeles. At the school, Gilbert reached out to students who he feels have been marginalized.

It is difficult to know from meeting him how Gilbert struggles with the most conventional of situations. He struggles to accept ideas like anxiety or conditional love. When asked about his hobbies, Gilbert is baffled.

“I don’t mean to seem redundant, but what I like to do in my free time, is just to know what the hell is going on, in such a serious way, that I don’t even know if I can convey it to you,” Gilbert said. “I am so distracted by convention, and there’s no end to it… I wouldn’t say it’s a hobby, but I’m completely distracted by other people’s behavior.”

Gilbert confesses that he is more committed to expression-based learning than curriculum-based learning. Gilbert urges his students to think differently and share their reservations about material, which is not always conducive to teaching convention.

This discovery led to Gilbert’s exploration of art as an expressive medium and symbiotic to learning. Art has allowed him to reconcile his idealism with an imperfect world. Gilbert has created art therapeutically since he was young, often giving artwork to friends and family.

Hearing a friend’s acceptance of inhibited love, Gilbert made her a quilt.

“The patchwork was hearts in boxes, nothing but hearts in boxes,” Gilbert said. “I said, ‘Snuggle up to this.’ If you’re saying to me that you’re okay with love being rigid and finite, then use this. That’s the sort of art I do. It has to do with challenging people to broaden their definition of love.”

He has the air of someone who is unapologetically happy. Gilbert speaks of love and the proverbial heart in a way that makes it feel as though he is the first one to do it right.

“I love the facility of learning, and then the art was just something that happened, and then the idea of facilitating love: that matters a lot to me,” Gilbert said. “But to be touched? I have this idea that I don’t have access to my own heart, and that the only way I can access it is through interacting with others.”

Gilbert describes his life as having been “so magical and so enchanting.” He will continue learning about learning. His condition presents little more burden than an allergy, it would appear. Gilbert’s favorite painter, Van Gogh, is remembered not for his social eccentricities, but for the power of his colors. Gilbert will continue to love unconditionally and to unlock boxed hearts.

“[I was] in Paris, at an impressionist museum, and I walked into a room and burst into tears,” Gilbert said. “Each wall had four Van Goghs on it. I don’t know if you can imagine that. They talk about him like he was sick or something. If being all heart makes you sick, then yes, he was sick.”