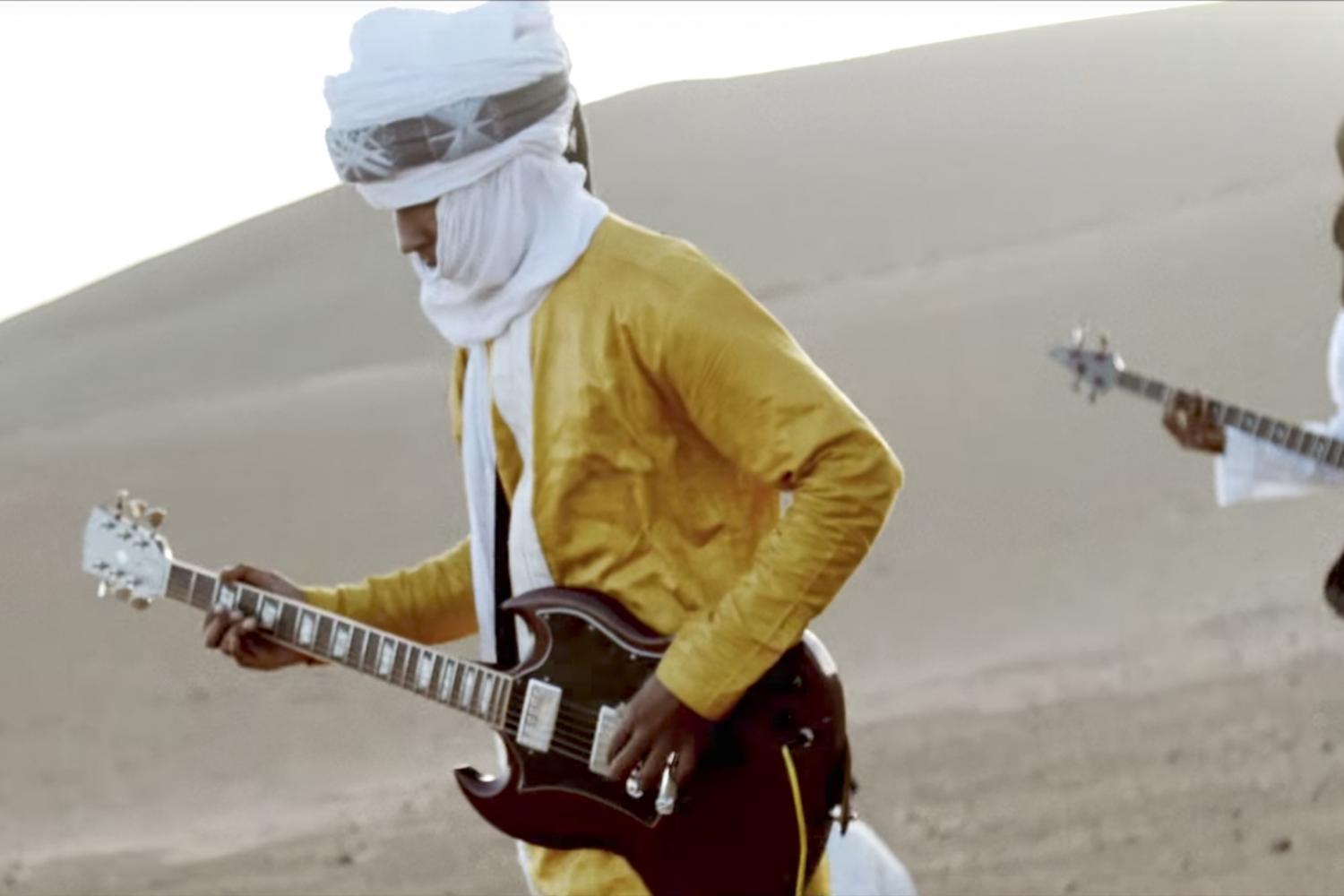 Celebrate the launch of The Talon’s SoundCloud page with Michael Sieffert’s look at the evolution of the Tuareg nomads’ unique brand of rock music.

At night in the small Malian town of Tessalit, the desert is anything but silent. Women wearing long robes and men in indigo dyed tagelmust headcoverings dance and clap to music. The music has a long and complex history, that stems from rich culture and a people’s struggle.

The Tuareg (Kel Tamasheq in their native Tamasheq language), are a nomadic group of people that have inhabited the desert since the 4th century A.D. While we may imagine these nomads traversing the desert in caravans, the Tuareg have recently proved that they excel in another distinctive trade: rock music.

The Tuareg rock revolution began in the late 70s when a young Tuareg from Mali by the name of Ibrahim Ag Alhabib met several other youths interested in rock music while in exile in neighboring countries Libya and Algeria. The Tessalit natives found solace in the rock music of the west.

The group played small shows for years, during a time when Libya’s infamous dictator Muammar Gaddafi commisioned Tuareg people from neighboring lands to serve in his army. Many Tuareg traveled to Libya in this time, as they had been promised prosperous and glorious lives by the dictator. The group would play for the other soldiers during down time and helped forge a sound for themselves.

Over the next two decades, the men played their music to Tuaregs around the Sahara, even while fighting in various uprisings in the region. The Sahara has been fraught with numerous rebellions over the last 50 years, which has caused instability and poverty to spread across Tuareg lands. Despite this, the band continued playing for their people, giving them reasons to celebrate and reflect on their lives.

Once a relative peace had settled over northern Mali, the group returned there and began to focus all of their time on their music. The group called themselves Kel Tinariwen, which in Tamasheq means “People of the Desert.” Over the years they dropped the Kel and now go by the name of Tinariwen.

Tinariwen’s musical style comes from a combination of ‘assouf,’ which is traditional Tuareg guitar-based music, and classic Rock And Blues music. Inspired by classic western acts such as Jimi Hendrix and Carlos Santana, a new genre called Desert Blues was formed with Tinariwen leading the charge. The guitar-driven music provided not only something for the Tuareg to dance to but also a way to share the stories of the Tuareg people.

The Tamasheq lyrics of Tinariwen’s music tells of the struggles and beauty of the Saharan way of life. Stories of the the desert and the difficulties of life float on top of smooth guitar rhythms and strong beats. While the music was originally written to entertain the Tuareg people, Tinariwen have grown into an international phenomenon. Reaching worldwide audiences, their 2012 album “Tassli” won the Grammy for Best World Music. The band now tours all over the world and even made a stop in Berkeley in May 2017.

Peace didn’t keep in Mali. The same year the group won the Grammy, a member was abducted by Islamic militants. He was released months later, but the abduction serves as a reminder that the struggle of the Tuareg people is far from over.

Tinariwen was only the start. Bands have sprung up all across the Tuareg world in the last two decades. One particular musician has come to prominence in the last decade; a Nigerien named Omar Moctar, who goes by the stage name Bombino, is slowly making his way up the world of rock music.

Born in 1980, Bombino and his family left Niger in the early 90’s because of the same revolution that some of the members of Tinariwen were fighting in. During his time in exile, Bombino became proficient at the guitar, and after returning to Niger, he and a group of other musicians played weddings and other events.

Around 2007, several western record labels and filmmakers discovered Bombino and his music, and helped him put together a collection of his work. In 2009, Sublime Frequencies put out “Guitars from Agadez Vol. 2” which brought Bombino’s music to the western world for the first time. Chaos struck the Tuareg again, and with a new rebellion, Bombino was once more pushed into exile.

After his second return home, Bombino found he had won the heart and ears of Dan Auerbach, the lead vocalist of the American band the Black Keys. Auerbach worked with Bombino to produce his 2012 record, Nomad. The next year he would find himself opening for the likes of Led Zeppelin frontman Robert Plant.

Fame came quickly to the 37-year-old musician. With the release of his most recent album “Azel” in 2016, Bombino is currently touring Europe, bringing the Tuareg soul to eager listeners.

Tinariwen and Bombino are just the beginning. Dozens of Tuareg bands have popped up in the last decade or so. Bands like Mali’s Terakaft, and Tamikrest, Niger’s Kel Assouf and Koudede and Algeria’s Imarhan continue to spread their music to a growing audience. If you’re in the mood for something different, turn on a little Desert Blues and let sweet guitars and Tamasheq singing bring you right into the middle of the Saharan tenere (desert).