The Pros And Cons of Being a Fan 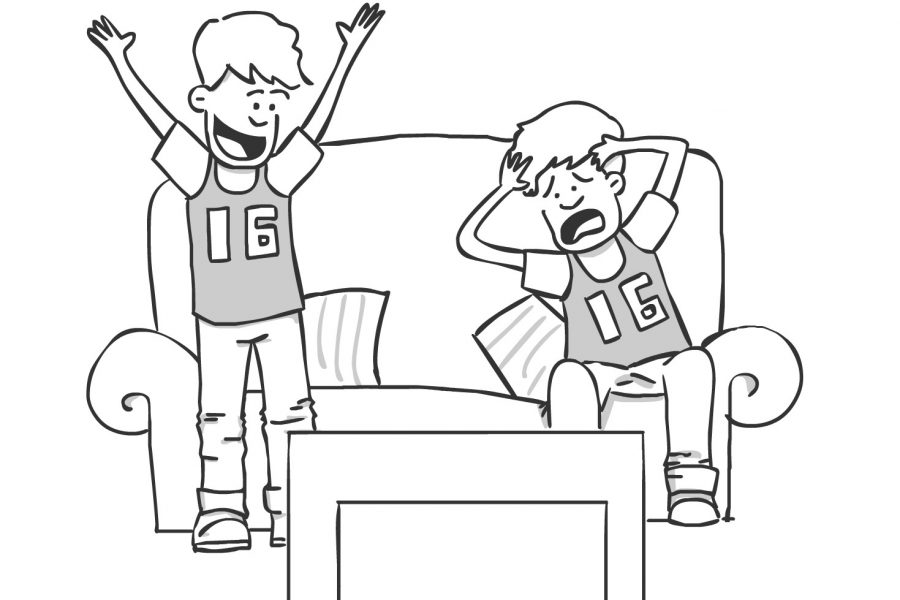 My family has never had a lot of respect for sports. My dad has the same intellectual respect for football players as he does for rhinos, and is distinctly proud of the fact that he managed to rank dead last in his company’s fantasy football league. Once a year we get together to watch the Wimbledon finals because it seems like the expected British thing to do, and occasionally we play table tennis.

But a few months ago, because we couldn’t find anywhere else to eat, I found myself sitting in a sports restaurant and bar with my dad and brother. A faint TV in the background showed the Warriors running back and forth.

We were eating and talking normally when the entire bar suddenly went completely quiet. Every single pair of eyes was glued to a Warriors player, shooting two free throws with seconds left to try and tie the game.

He made them both, and the bar exploded. Drawn into the game, my dad and I watched the overtime, which culminated in Stephen Curry’s infamous half-court buzzer beater to win the whole thing. My dad and I stood up at the same time and yelled, as the bar dissolved into hysterics and shouts of elation and dismay.

There are moments in sports that break all barriers of cynicism and highbrow perspective; I’ve watched Kris Jenkins make that March-Madness-winning 3-pointer about 50 times, and I didn’t even know what March Madness was until a few weeks ago.

My background is this: I own one sports shirt. It’s dark blue, comfortable and says “NFL” in big, vague letters. It was given to me, a joke gift, as a product of a conversation I had with a friend in which I couldn’t remember what those three iconically American letters represented.

It’s actually a great addition to my wardrobe, because it allows me to attend any football-related event and proudly display my affiliation and inclusion in the great pastime; proclaiming that I support the NFL means I win and lose every game I watch.

I never had a team to follow, so I never followed a team. I didn’t get the inherited love for a premier league soccer team or the hometown love for a baseball team. It’s easy to descend into snarky pretentiousness: What’s the point of having a favorite sports team? What impact do their wins have on your life?

But recently I’ve noticed a kind of passion and excitement present at sports games that’s sometimes missing in my own life. A friend tells me that when his team wins in the morning, he spends the rest of the day in a good mood and that when he sees a particularly amazing play, the excitement and adrenaline of simply viewing it outweigh the monotonous downsides of a single-team obsession. He says the good outweighs the bad, that the losses don’t bring him down as much as the wins bring him up.

There’s beauty in the community that can build itself around a team. When Hurricane Katrina destroyed New Orleans, one of the first rebuilt buildings was the football stadium. The defeated city rallied around the spirit and energy of its football team, and when the Saints won the Super Bowl that very year, the spirit of the city soared around their central hope — maybe if the Saints could come back stronger than ever, so too could the city.

Then there’s the casual brotherhood head-nod of acknowledgement when you see a stranger wearing the same team gear as you, or the subcultures that allow instant connections in unfamiliar locations. “How ‘bout them Cubs, eh?” is the universal guy announcement that someone wants to make a friend.

There are downsides, too. For every win, there’s a loss — for every happy fist-pump, there’s a dejected face-palm. Players seem to drown constantly in scandal, from drug use to general abuse, and the trading system that exists in most professional sports leads to constant betrayal as star players trade jerseys like laundry.

I’ve concluded that it’s worth it. But how does one acquire a favorite team?

The key, according to my sports-focused friend, is to suck it up and not pick the team that’s doing really well. It’s more fun to make an emotional investment and root for the underdog than it is to hijack the bandwagon and ride it all the way to pseudo-excitement-ville. That being said, there’s really no meaningful criteria for selecting a favorite team. So do a bit of half-hearted statistical research, give up, pick a uniform color you like, and get ready to make friends, lose friends and beat your chest at sports bars like the primal balls of excitement we’d all like to be.