The NBA vs. racism: The ongoing fight for equality 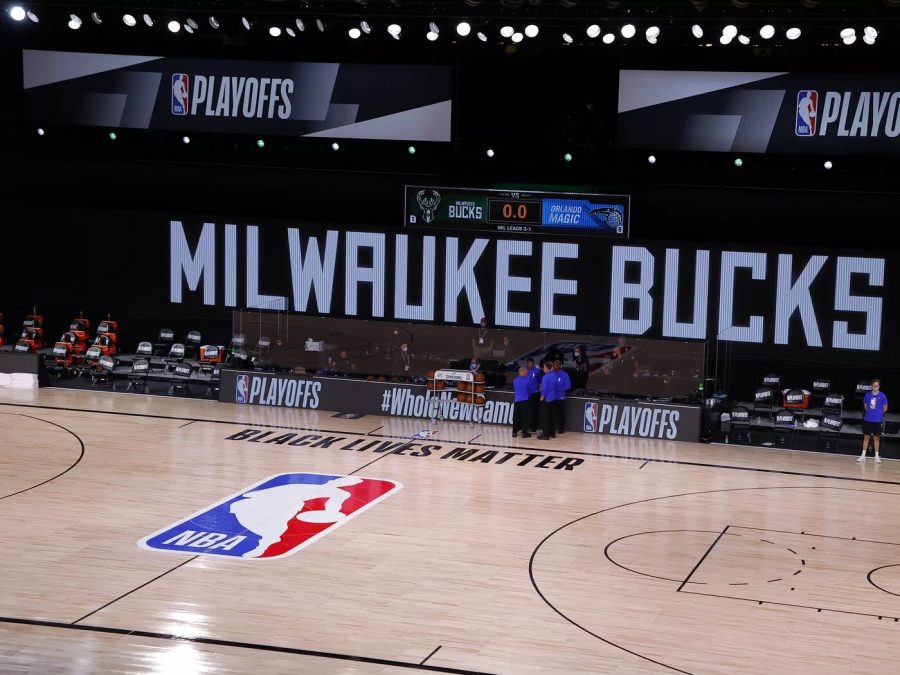 Referees gather together after the Milwaukee Bucks refuse to take the court against the Orlando Magic. After numerous games were canceled following the police shooting of Jacob Blake, a Black man in Kenosha, Wis., the NBA and NBPA talked with players and staff and released a joint statement announcing that teams would continue playing playoff games on Saturday, September 29.

Day after day, countless Americans have continued to protest the racial injustice present in today’s society, most predominantly through the Black Lives Matter movement. This demand for change has not only become noticeable on the streets, but also in professional sports organizations across the country — most notably, the NBA.

For decades, Black NBA players, who make up the majority of the organization, have been the targets of many racist acts. The severity of the acts varies from players being verbally assaulted by fans to team owners complaining about owning predominantly Black basketball teams. Historically, NBA players have refused to boycott games because they believed doing so would forfeit their dedication to the game itself. But times have changed.

In light of the Sunday, August 23, police shooting of Jacob Blake, a Black man in Kenosha, Wis., all NBA playoff games scheduled for Wednesday, August 26, through Friday, August 28, were canceled. The joint decision to postpone games came after the Milwaukee Bucks refused to take the court on Wednesday and both the Los Angeles Lakers and Clippers said that they would end their seasons.

On the evening of Wednesday, August 26, after the announcement of the postponement, players and coaches met to discuss racial injustice in the United States. They covered topics such as how to hold the police accountable and how to encourage voter registration.

In addition to the postponement, some players are launching their own initiatives to try and raise voter awareness. Lebron James and Damian Lillard, along with NFL players Patrick Mahomes and DeAndre Hopkins and former WNBA star Lisa Leslie, are leading a multimillion-dollar movement called More Than A Vote. The program, funded by James and his close friend Maverick Carter, encourages younger volunteers to work at polling stations so that older ones don’t have to put themselves at risk of COVID-19.

“Change doesn’t happen with just talk!!” James said in a tweet. “It happens with action and needs to happen NOW! For my @IPROMISESchool kids, kids and communities across the country, it’s on US to make a difference. Together. That’s why your vote is @morethanavote.”

Word of James and other players starting these movements has reached many communities, including ours. Senior Brandon Gottlieb, a combo guard on the varsity boys basketball team, agreed that the postponement showed the true strength of the game itself.

“Basketball sets up a community where everybody learns to respect and support one another’s values,” Brandon said. “It was touching to hear about all the players making a change and prioritizing promoting their message over entertaining the public through their job.”

This past Friday, August 28, the NBA and NBPA released a joint statement after talking with players and staff from within the NBA bubble, announcing that teams would continue playing playoff games on Saturday, September 29.

In this statement, the NBA also outlined the actions that they would take to fight against the racial inequality going on in America. They include advocating for police justice reform, converting arena properties into voting facilities for the 2020 election and dedicating advertising spots during each playoff game to raise awareness about voting opportunities.

“The impact our platform has on people outside of the league is big,” Bucks forward Giannis Antetokounmpo said in a post game interview on Saturday, August 29. “As a team we were able to speak out, and the NBA helps make sure our voice is heard.”