The music scene at Red Rock 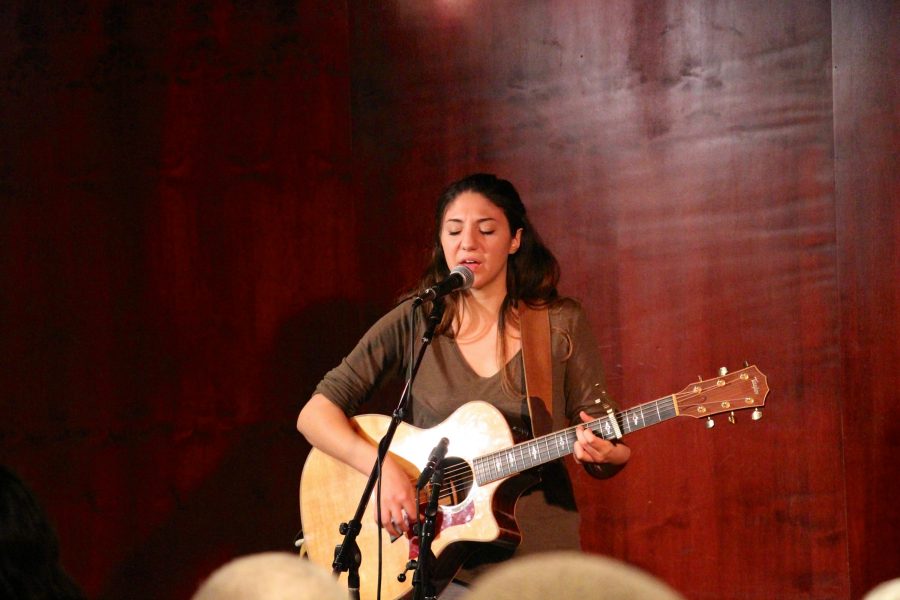 Within Red Rock’s warm ruby walls, productivity and coffee are accompanied by music and burbling chitchat. Perched humbly on a bustling corner of Castro Street in downtown Mountain View, Red Rock Cafe is a gateway to far more than freshly brewed coffee. The cafe fosters creativity and expression with its Open Mic Nights every Monday evening, and provides a home for many more special events. Ascend the staircase to the second floor, and you will likely witness inspiring performers, be they slam poets or members of a rock band. The air in Red Rock is filled with the delicious scent of coffee and the motivating energy of each individual in this creative community.

Red Rock Coffee is locally famous as a confluence of art, food and music, but the details of its management are less well known: the coffee shop is owned by The Highway Community, a religious organization founded in 2000 with churches in Mountain View, Palo Alto and San Jose.

Though it is primarily a religious organization, Highway Community does not intend for Red Rock to be an extension of its church service.

“It’s all technically one organization, but the books are kept completely separate. It’s not like people come and buy coffee and that [money] goes into the church,” Director of Operations and Community Development David Haley said. “Red Rock has its own board of directors… They’re really the ones that steer the direction for Red Rock. Outside of trying to utilize the space as a gift to the community and a place for people to gather, that’s the end of the formality between Highway and Red Rock.”

Kevin Marks, Creative Art Director of Highway Community, says that Red Rock is not the first of its kind, but it differs in intent from other church-owned public spaces.

“[Buying a cafe] wasn’t a new idea, per se, but when most churches [do so] it’s attached to their worship. We wanted a real cafe that was for the community, in the community. That’s how the idea came about,” Marks said. “We looked for about a year at different spaces [all while] we were right above Red Rock [in our office]. It came up for sale, and to us it was God saying something: the place right beneath us was for sale.”

Highway and Red Rock were indeed destined a fruitful pairing — Highway Community’s ownership has imbued Red Rock with a thriving art culture, through visual art as well as a weekly open mic night.

“One of our strengths has always been music and art,” Marks said. “[We felt] that could be something where we could have a footprint and serve the community without evangelizing, and a cafe where there was music and art and good food and conversation —  we thought that would be really interesting.”

The Open Mic night developed shortly after the Highway Community purchased Red Rock in 2005, when a previous, more nomadic establishment found a permanent home at the cafe. Open Mic aims not to further Highway Community’s goals as an organization, but rather to give back to the community.

“Open Mic night is ultimately meant to be selfless,” Creative Director of Mountain View Branch and Booking Agent of Red Rock Nikolaus Bartunek said. “Everything needs to be structured around the perspective of,  ‘If I were here as a guest, how would I want to be treated and what would I want my experience to be?’… [We aim] to serve the local music community and give people who want to start a nice springboard.”

And Highway Community has served the community well — bassist Noah Laniakea sees Open Mic as a source of inspiration as well as a platform for their art. This motivation Red Rock provides is not as genre-restrictive as it might seem — for Laniakea, though fellow bassists are few and far between, Open Mic is a learning opportunity nonetheless.

“There’s a ton of things I need work on for the bass, and listening to other people is the best way to do that,” Laniakea said. “The best way to get better at music is to be near good music.”

Even Open Mic Host and singer Jake Wichman was motivated by the event to begin creating more music. Through performing on Monday nights, Wichman became more comfortable and confident in his art.

“It was from taking over as host and being involved in the Open Mic community that really made me want to step out more as an artist,” Wichman said. “It wasn’t until after I’d taken over the Open Mic that I started doing shows and recording and making a lot of my own music.”

Beyond inspiration alone, artists come to Open Mic to hone their respective crafts and to do what they love, whether that be playing the bass or expressing themselves through song. In serving the community, Red Rock has created a community of its own, one which cherishes collaboration and creativity above all else.

“For me personally, some of the people I’ve connected with at Open Mic have become my family,” Wichman said. “[The Open Mic community is] not competitive: we’re not here to try to be the best or prove we’re better than anyone, we’re here to support each other and enjoy other’s art and be able to have a safe place to display it.”

On the Mic: Noah Laniakea

With an instrument as tall as he is, Noah Laniakea has assumed the distinctive role of resident bass player at Red Rock Open Mics. While Laniakea only started coming to Red Rock recently, he has been playing the bass since elementary school, majoring in music and forming a band along the way.

Throughout his musical career, Laniakea looks to defy expectations associated with his instrument.

“[The bass] is relatively unique and most people who play the it do relatively typical bass-kind of things,” Laniakea said. “But for me, I try to do things that work for the bass, but also push it forward. I try to show the bass is an instrument capable of a lot more than what people think it can do.”

With each of his songs, Laniakea explore themes ranging from death to love, all with dark tones. Still, even with less bright notes, Laniakea still hopes to connect to his audience with his work.

“My songs tend to be more reflective and dark rather than poppy and bright because poppy and bright generally doesn’t work well on bass,” Laniakea said. “It’s [about] familiarity but a sense of otherness and how those two things can coexist at the same time even though they shouldn’t.”

One song of his, “Naranja” or “Orange” in Spanish, is played regularly at Open Mics. The song is one of Laniakea’s favorites and through playing it, he hopes to convey a very specific message.

One song of his, “Naranja” or “Orange” in Spanish, is played regularly at Open Mics. The song is one of Laniakea’s favorites and through playing it, he hopes to convey a very specific message.

“When I was living in Fresno, we had a neighbor who was this really nice old lady and about once a week there was an orange tree out front and she would get oranges [for us],” Laniakea said. “She was up there in age, and one day, she passed away in her sleep and it was sad because even though we didn’t talk to her a ton, her gesture was so significant while being relatively miniscule. So I wrote a song that’s about death and about how how it happens, and things can keep going, but we should try to acknowledge the good things that go on in our lives while they’re there, even when [those] things are seemingly insignificant.”

On the Mic: Israel Sanchez

Israel Sanchez’s first memories involve singing, creating songs in his head and playing with a toy xylophone. Raised in East San Jose since he was two years old, Sanchez always felt drawn to music and as he grew older, he gravitated toward the guitar. Sanchez takes inspiration from the city’s bustling skate culture, an important part of his childhood.

“My approach is unorthodox,” Sanchez said. “Being self taught plays a major role. I search blindly across my fretboard for sounds as I have no formal training. I never know what key I am in or scales so I accidentally discover new sounds.”

Sanchez pushes himself to perform frequently — he has completed around a hundred shows this year alone.

“Performing is a sacred thing for me,” Sanchez said. “It allows me to express myself in ways that I can’t in everyday life. It’s a window into myself and how I interpret life. I also feel it’s a gigantic release for energy that could otherwise consume you in negative ways.”

Sanchez never begins performing with a rigid plan in mind. Often times, he improvises by making use of a loop pedal to record bass lines or rhythms he drums on the side of his guitar, then freestyling.

“I don’t consciously decide the direction,” Sanchez said. “My music upon listening back usually sounds on the dark side as far as melody and content. It’s a bridge [that] helps me transmute feelings into a positive listening experience.