The media needs to do better in portraying female politicians 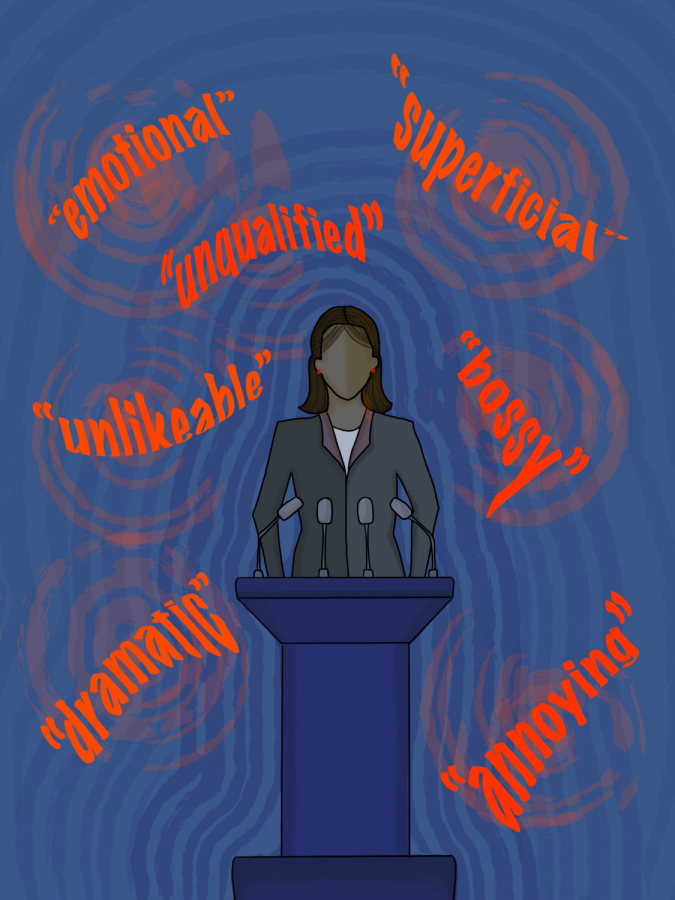 Staff writer Anika Sikka gives her thoughts on how female politicians have been portrayed in the media and what should be done moving forward.

I was in fifth grade when the 2016 presidential election took place. My class was talking about the first presidential debate when my teacher told us that the only reason Hillary Clinton would win the debate: She’d cry and get the sympathy of viewers.

Even as a naive fifth-grader, I knew something about that comment was off — and that’s because it was. My teacher took a common stereotype about women and used it to discredit Clinton’s accomplishments and skill in politics. These underhanded comments towards women are not limited to fifth-grade classrooms, though. It’s something I see often in the media today.

When I scroll through my news feed, I see article headlines like “No, it’s not sexist to call Elizabeth Warren ‘unlikable’” which deny the sexism female politicians face, instead blaming it on their unlikeable personalities. Others such as “Alexandria Ocasio-Cortez’s makeup routine reflects the enduring power of lipstick” credit congress member Alexandria Ocasio-Cortez’s lipstick for her political success, taking away well-deserved attention from her policies and achievements in Congress.

It’s hard for female politicians to be taken seriously nowadays, especially with the media’s heavy emphasis on their clothing and superficial attributes. From criticizing Hillary Clinton’s hair and pantsuits to Ocasio-Cortez’s lipstick, the media covers it all.

I highly doubt that a woman’s pants are an indicator of her qualifications for serving in government, but I am sure that this critique is yet another way to isolate women in the political field, and further demean them by making them look less serious.

However, sexism in the media goes beyond commenting on a woman’s clothes to representing women in the media personally, not politically.

For instance, during the 2016 presidential election, articles with titles like “Hillary Clinton: Grandmother-in-Chief?” speculated how Clinton’s new granddaughter would distract her from her leadership responsibilities.

I was disappointed and frustrated: The media only raised concerns about Clinton’s granddaughter because she is a woman. Social media users and news outlets were threatened by Clinton’s ability to govern the country while also maintaining a family, so they portrayed her in a negative light, tainting Clinton’s campaign.

While practically every news source covered Clinton’s grandchild, not one batted an eye when Senator Mitt Romney posed with his 18 grandchildren. The fact that people were reading more about the meaning of her grandchild’s name than her policies is disgraceful as it took away from her policies.

Because female politicians are underrepresented in the political field, many still do not think they “belong” in government positions.

When Ocasio-Cortez responded to congress member Ted Yoho calling her a “f*cking b*tch” with reporters present, headlines such as “Ocasio-Cortez delivers emotional floor speech slamming Rep. Yoho’s abusive language” emerged, implying that Ocasio-Cortez’s speech wasn’t veritable. Oftentimes when the media labels something as emotional, viewers devalue it because they feel the story is clouded with bias.

If a man had delivered that speech, the media response would’ve been egregiously different, praising him for his bravery and confidence to speak out for what’s right.

Every time a woman simply speaks up, she’s labeled as emotional and is brushed aside. This makes it practically impossible for women to be seen on the same playing field as men.

Aside from media consumption, sexist practices are so ingrained in society that they slip by unnoticed. News outlets calling President Bill Clinton “Bill” is almost unimaginable for common folk, yet we have no issue calling former Secretary of State Hillary Clinton “Hillary.” This propagates the notion that female candidates are less important and qualified. Calling women by their first names also implies that they deserve less respect, similar to how calling a teacher by their first name would be disrespectful.

Why do we target the personal lives of female politicians, while leaving their male counterparts unscathed? Is it due to internalized misogyny or just simply institutionalized sexism ingrained in our brains?

While these questions might not have a clear answer, we have to ask them. And I get it, it’s tough to recognize that you might be discouraging women in politics, but self-awareness is the first step to concrete and sustainable change.

Whether it’s taking a few extra seconds to consider the impact of our words and actions or asking ourselves the relevance of a female politician’s personal life, it’s important to take a step back and reflect. How are we contributing to sexism towards women in politics?

When we increase our self-awareness and question inherent practices, we clear the path for change. Even though it may be uncomfortable, growing out of problematic mentalities like sexism and racism is an essential step to take to achieve equality.

To my fifth-grade teacher and anyone in the world who doubts a woman’s power: It’s 2020, not 1950, so wake up and start acting like it.