The Kony 2012 Bandwagon: To Jump or Not To Jump

I am a skeptic and a misanthrope. I can without much further explanation say that I was understandably critical when I got home Wednesday night to see a flood of posts and profile picture changes promoting something called “Kony 2012,” spearheaded by a group that I was quite familiar with: Invisible Children (IC).

IC and I go way back. I first heard about them and their original video when I was in eighth grade, four years after the film’s first screening in 2004. I was moved by the images that I saw on the screen: children who had lost freedoms that I took for granted, a people whose future seemed to be filled with displacement camps and a never-ending war.

I was inspired, I was devastated, I wanted to know how I could do more. I did research online, I read about IC’s projects, I even created a PSA about the situation in Uganda and Sudan for an art project later that year. Stopping child soldiering and the ending Northern Ugandan war were causes for which I was going to advocate.

I continued to follow IC’s progress throughout my freshman year of high school by reading blog posts, signing petitions and at one point considering attending “The Rescue,” an all-night event they were staging to promote awareness.

The interest was short lived. In fact, I soon forgot about IC altogether … until two nights ago, that is.

However, this time around, I was less enthusiastic about the message that the not-for-profit was trying to blast to the masses. The reason? I had no idea what exactly IC does.

For all their bravado, aesthetically pleasing graphics and professionally crafted documentary-style videos, I have never once heard of IC doing anything on the ground, anything to directly affect the situation. Do events like “The Rescue” and “Displace Me” have a purpose? I see a ton of money go into the organization, but the impact of their programs are hardly publicized in comparison to their marketing style campaigns.

Seeing little different with Kony 2012 compared to what had been orchestrated years before, I was quick to jump on the bandwagon of those against the campaign. It seemed too mainstream, too limited and too naive. Many attending the Cover the Night event and sharing the Kony 2012 video were suddenly fascinated by a man and a situation that they hadn’t heard of or cared about before watching the video. I was disgusted by how easily they could be so passionate about something they had barely researched. 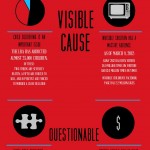 I will be the first to admit that I was eager to judge. While I may not fully condone the way that IC presents themselves, they are not a blatantly corrupt organization (as many bloggers have been proclaiming).

A little background: IC, as of late, has been accused of being a shady organization. Claims of economic irresponsibility (the language of their audit suggests that only 32 percent of their money was spent on ‘direct support’) litter the internet. Phrases in their videos often lead to a more than subtle suggestion of what many label as the “White Man’s Burden” after Kipling’s poem. Furthermore, there is increasing skepticism over whether IC overstepped their bounds as a 501c(3) in lobbying for the passing of the LRA Disarmament Bill in 2009.

In response to this rising disapproval, IC released a response post on their website, rebutting many claims that have been circulating the blogosphere as well as forum sites like Reddit. Of their goals, they say the following:

“Invisible Children’s mission is to stop LRA violence and support the war-affected communities in East and Central Africa. These are the three ways we achieve this mission; each is essential:

Make the world aware of the LRA. This includes making documentary films and touring them around the world so that they are seen for free by millions of people.
Channel energy from viewers of IC films into large-scale advocacy campaigns to stop the LRA and protect civilians.
Operate programs on the ground in LRA-affected areas that provide protection, rehabilitation and development assistance.”

IC is not your standard organization. Most people associate the word organization with the concept of relief, of giving aid directly to the people–partially the reason why I became so frustrated with IC’s methods.

But what I have come to realize is that this is a misconception; IC is ‘media-based,’ it’s objective: to inform. My own preconceived notions, and the notions of many others, obfuscated my ability to see the group for what they really are. I shamed the organization for something they did not promise to do in the first place and it is with this knowledge that I must reconcile.

IC has the right idea. It wants to promote awareness, to gain support for an issue that they have been documenting for years.

Where it goes wrong is speaking in absolutes. In order to target its primary audience–socially active youth–IC’s documentaries and events have a very narrow focus, making appear as if all information has been laid out on the table for us to lap up and regurgitate to the world at large.

“No one wants a boring documentary on Africa,” one of IC’s founders, Jason Russel, said in an interview with the New York Times. “Maybe we have to make it pop, and we have to make it cool … We view ourself as the Pixar of human rights stories.”

The problem with this is that there is more to know, and it is important that supporters of IC’s message advocate not only Kony 2012’s goal of making Joseph Kony ‘famous,’ but educate themselves about the LRA and the situation in East Africa at large.

Joseph Kony is not the only culprit, nor is it America’s job to simply swoop in and save the day. The decades long history of Uganda, Sudan, Dem. Rep. of Congo, and their dealings with the LRA is complex and cannot ultimately be wrapped neatly into a nicely packaged and designed campaign, but any type of campaign is a positive start.

I applaud IC for gaining the attention of such a broad audience, but I fear that the finality of knowledge they imply in their videos will limit what the Kony 2012 campaign will be able to accomplish.

Invisible Children may not be corrupt, but it also not the typical organization it might lead one to believe it is. (Nor is it the most comprehensive sources of knowledge.) There is not much that can be changed about that, but it is important that supporters are aware of these facts and use their knowledge to find out more. I’m not about to tell you, the reader, which organization to support. But what I do prescribe is knowledge.