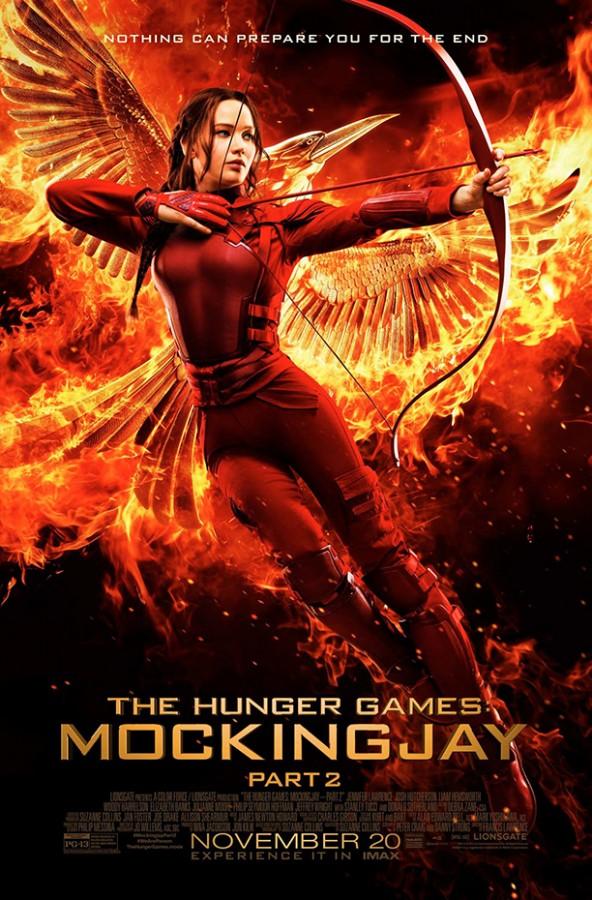 The Mockingjay has returned to its nest — with just as much appeal and magnificence as its first appearance last year, in the final production of the acclaimed “Hunger Games” series.

With a star-studded crew of the likes of Jennifer Lawrence, Josh Hutcherson and Liam Hemsworth, there was a lot of pressure on director Francis Lawrence and producer Nina Jacobson to produce a fitting ending for one of the most popular movie series in current years, but they finished with a bang.

As the final installment for the film adaption of Suzanne Collins’ best-selling “Hunger Games” trilogy book series, “Mockingjay Part 2” is the final movie in the four-part “Hunger Games” series. Like many recent book-to-film adaptations, the final book of the series was split into two separate parts.

“Mockingjay Part One” leaves off with Katniss Everdeen and the rebel army drawing closer and closer to the Capitol, but still having trouble capturing District 2. After being brainwashed by President Snow, Peeta has grown hatred for Katniss and the rebel cause. The shift in his outlook and personality drastically affects the tone of the film, creating a darker and more sinister air of resentment.

The final movie sets the stage for the ultimate showdown between President Snow and his Loyalist army and Katniss and the rebels. Finally entering the capitol after months of desperate fighting from both sides, Katniss, Peeta and the rest of the rebels must end the revolution by taking down Snow in his home district. Katniss, in her goal to eliminate the Loyalists and Snow, must put her friends and family on the line to finish off the revolution she has started.

As of November 26, 2015, “Mockingjay Part 2” has grossed $146.7 million in North America and $337.7 million worldwide. Despite being the least successful of the four previous “Hunger Games” films, it has still had the 24th best opening weekend worldwide ever, and its success is entirely justified.

Francis Lawrence beautifully directed the final part to the “Hunger Games” series by intensifying the emotional conflict between Katniss, Peeta and Gale. Lawrence focuses the majority of the movie on the District 13 crew as they navigate the booby traps that lie throughout in the city, but aside from the wild action shots, he zooms in on the emotional side and psychological tolls of the battle.

Many of the fundamental film trademarks of the “Hunger Games” series return, including quick camera cuts during intense fighting or chase scenes, with accompanying powerful music that adds to the level of intensity. Many film elements such as the incredibly realistic CGI effort during the final showdown in the capitol and beautiful cinematography during fight and actions scenes really brought the excitement to the movie. In the final battle, a bomb detonating temporarily blinds and deafens Katniss, and the violent, chilling serenity in the eye of the storm portrayed moments after the explosion truly shows the effort put in by the production crew to portray a realistic post-war scene.

Jennifer Lawrence and Josh Hutcherson both performed excellently in the movie, effectively illustrating the emotions of their characters on the big screen. Lawrence proved why she is one of the best actresses in Hollywood; when Katniss’ sister, Prim, died, Lawrence had the audience crying along with her as Katniss sobbed in despair. After returning to District 13, Katniss breaks down in front of her dead sister’s cat, the emotion and stunning cinematography of the moment marking it as pivotal scene and a pivotal moment in Jennifer Lawrence’s acting career.

Josh Hutcherson played the role of the brainwashed Peeta skillfully. As a disoriented and borderline insane character with vivid realism, Peeta’s personality shifted from the previous movies severely, going from humble and sweet to a polar-opposite — a cold shadow of his former self. Hutcherson’s flawless performance in spite of this dramatic switch only proves his ability to adapt as an actor. His shy and shrewd attitude added to the conflict in the movie and kept the audience on its feet about what would happen next.

Compared to most book-to-movie adaptations, “Mockingjay Part 2” is an effective translation of Suzanne Collins’ original novel to film, including many important scenes that encompass the essence of the story. From the sequence with Prim’s cat and Katniss to the scene where Katniss is shot by a District 2 soldier just outside a train tunnel, the film addressed a variety of specific moments and closely mimicking the novel itself. Lawrence was clearly dedicated to pleasing the “Hunger Games” fans, emphasizing the small details in the main plot to develop the emotional storyline of Katniss’ internal struggle and deepen the connection of the film to the book.

As the final piece to the “Hunger Games” series, the anticipation of the audience can finally be relieved with a well-crafted finale. The ending sequence was one that seems sudden, but wraps up the series well by answering the question many fans have: Who will Katniss truly fall in love with, Gale or Peeta?

“Mockingjay Part 2” is a movie that is recommended to people of all ages, but it can only be truly appreciated if you have watched every movie so far or read the books. There are too many references and characters returning along with the plot to understand the storyline if this is your first movie watched in the series.

This movie truly lives up to the immense media hype that was put on it leading up to its release. With many twists and turns, “Mockingjay Part 2” will keep you on the edge of your seat at all times.