The history of Homecoming at Los Altos

The Talon takes a look at the evolution of Homecoming over the last 65 years of Los Altos's history.

In every high school movie, the Homecoming Dance is a staple of the full high school experience. The parade, football game and dance—complete with the crowning of a king and queen—appear to be the standard. But every high school across the country has its own way of celebrating Homecoming, with each school’s traditions creating many different definitions of
Homecoming across America. At our very own school, Homecoming has gone through many changes and iterations since its inception. The Talon takes a look at the evolution of Homecoming over the last 65 years of Los Altos’s history.
1950’s 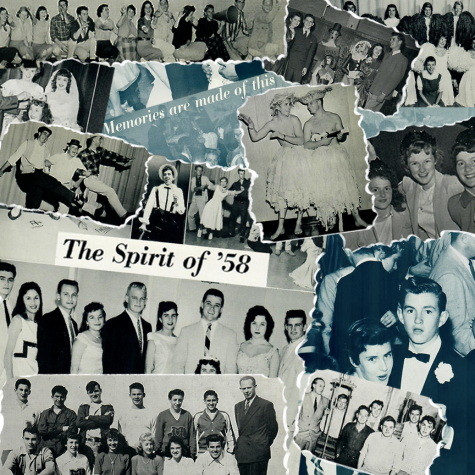 Los Altos was established in 1954 and major traditions like the Football game, Homecoming parade, and Homecoming Dance were prominent on campus. Homecoming Court, however, was not what we now know it as: It used to only consist of six girls. As part of the Homecoming court, each girl was required to have a male escort, but there was only the crowning of a queen and no king. 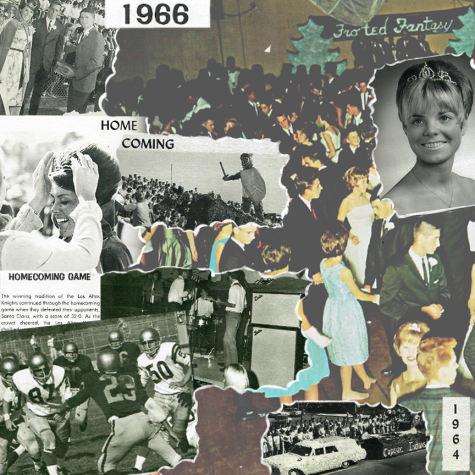 In the 60’s, though the floats weren’t super extravagant, the beginnings of that tradition are present. Additionally, excerpts from yearbooks indicate that being crowned queen was a title of incredible importance. For example, the Homecoming Queen of 1969, varsity cheerleader Margie Foster, cried when she was crowned. The Los Altos 1969 yearbook writes, “Overcome with tears, all Margie could manage was a ‘Thank you,’ to the crowd.” The Homecoming Queen the next year was Cheri Ellison and the yearbook writes, “all the hours of sleeplessness on the eve of Homecoming and the anxiety Cheri experienced in anticipation of achieving that coveted goal seemed to be worth it as she approached the throne.”

The Homecoming Dance of 1968 included a live performance by the one-hit-wonder rock band “People!” Their song “I Love You” rose to number one in Japan (twice), Israel, Australia, Italy, South Africa, and the Philippines, and peaked at number 14 on the Billboard Hot 100 in June 1968. This performance was accompanied by a light show and over 1000 balloons. 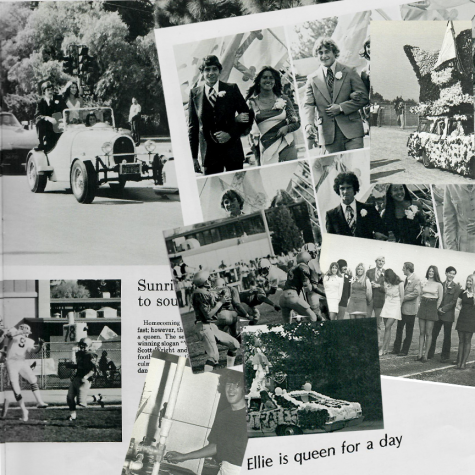 The 70’s overall were a decade of continuation for Homecoming traditions.

In the 1970s, float building took place only on campus. In 1976 in particular, students had two nights to complete the float for the parade that Friday, and the juniors were granted two floats for unclear reasons. However, the seniors still won.

During this decade, Los Altos’s mascot was the Knights. After winning against Peterson High School 20-0 in the 1976 Homecoming game, coach Tom Burt was honored for his 20 years as the football coach and the field was named after him. To this day, our football field is called Tom Burt Field. 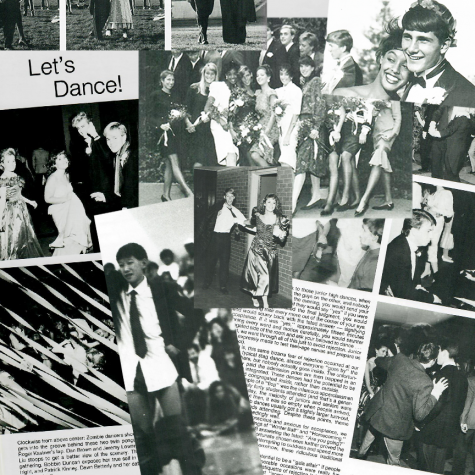 The 80’s Homecomings were dominated by social etiquette and a heavy dating culture along with an exciting new tradition. Homecoming’s main event in the 1980s was “The Kiss,” during which members of the Homecoming court would be blindfolded and kissed on the cheek. The 1988 Kiss for the girls on court was 49ers wide receiver Dwight Clark, whose touchdown connection with Joe Montana took the 49ers to the Super Bowl.

At dances, it was customary to wait outside until someone approached you and asked you to dance. The Los Altos 1986 yearbook wrote, “Proving ourselves socially conscious and anxious for acceptance, we rushed to find dates for the evening of ‘Winter Ball’ and ‘Homecoming.’ After all, nobody wanted to be left answering the fated: ‘Are you going?’ with a disgraceful ‘No…’”

Alumni of Los Altos can also attest to the rigidity of the dance.

“My first three years [at Los Altos], it was pretty much a traditional guy-ask-girl event,” history teacher and Los Altos alum from the class of 1990 Mike Messner said. “It would have been totally unacceptable for two guys or two girls to attend the dance together as a couple. But my senior year, ASB announced it was equally okay for girls to ask guys, [so] a female friend of
mine asked me to go with her, and I did!”

Being crowned Homecoming king and queen back then was still seen as an indicator of popularity and was hugely significant. Consequently, many winners were what was expected—popular guys and girls. There was a place in the yearbook just for court members, and the two winners were even on the front page of the Los Altos Town Crier.

“Being voted Homecoming Queen was like a beauty pageant,” history teacher and Los Altos alum from the class of 1980 Todd Wangsness said. “The Queen was supposed to be the most popular girl on campus.” 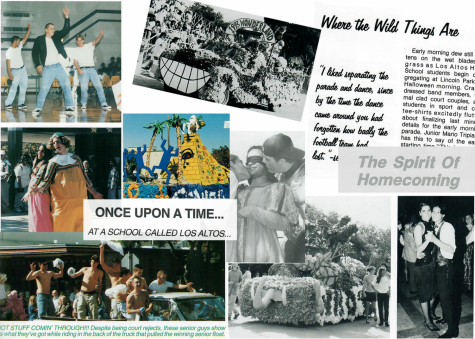 The 90s were marked by many changes to all aspects of Homecoming. For example, court couples began doing skits rather than just introducing themselves to the student body and the dance, parade and football game were moved to the same day. However, the biggest change for the students was the implementation of the breathalyzer test upon entrance into the dance. In a 1997 issue of The Talon, a survey was conducted that revealed out of 103 people, 26 percent said they have shown up to a school dance intoxicated and 64 percent of people said
they would not voluntarily submit to a breathalyzer test.

The Homecoming Court selection process was also broadened in 1990 from just the senior class voting to also allowing clubs, varsity sports teams, Main Street Singers and more groups on campus to pick one girl and one boy from the senior class. This change came about in hopes of bringing about a larger, more diverse pool of nominees.

A 1990 Los Altos yearbook quoted a student who said, “We have never included so many social groups. It was nice to have a minority Homecoming King because it’s indicative of the character of the school.”

The 1992 Homecoming Dance was held on Halloween night and rumors spread that the police and administration wanted to keep students off the street on Halloween night. In 1996, Homecoming was held on a Sunday as the Saturday date they picked conflicted with a Marching Band competition and the SAT. In response, several Mormon Los Altos students who felt alienated by the new date created a petition because, according to Mormon beliefs, Sunday should be spent with the family.

A Talon editorial from the 90s titled “Homecoming is too tied to tradition” wrote, “The only real tradition at Los Altos—other than losing football games and graduation—is the fact that the Homecoming dance always causes problems.” 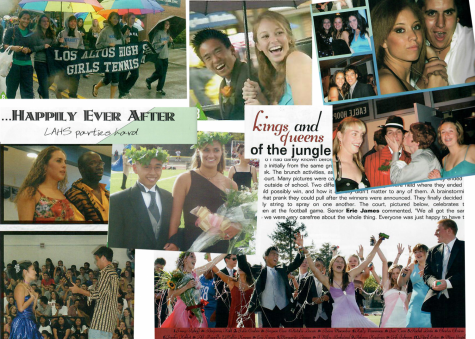 In the 2000s, much of Homecoming week was similar to previous years as couples still performed skits. However, it was acknowledged that getting on court didn’t truly matter in the long run, a contrast to previous views of Homecoming as an all important event.

“Girls from a young age dream of being Homecoming Queen without ever really realizing its implications. The truth is that it has none,” a 2002 Los Altos yearbook read. “The attraction to being homecoming King or Queen is a quick moment of glory. In this day and age, it’s about the
fun of getting dressed up and having the school see your true personality through your skit and the descriptions of yourself.”

An Opinions article in a 2001 issue of The Talon wrote, “Realizing the impact and influence that skits have on the school, it is the administration and student body’s collective responsibility to present a diverse and representative group of seniors to participate on the Homecoming court.” One member of the court said, “It’d be depressing to have 10 water polo or football players on the homecoming court.”
2010-Present 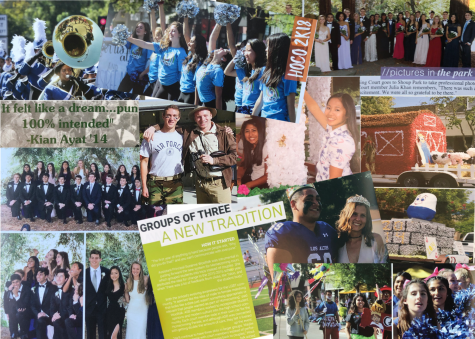 In recent years, the Homecoming week traditions have been solidified, featuring dress up days, a football game on the Friday before the dance, and the dance held on a Saturday. However, who is crowned in court continues to change. In just four years, nominees have been changed to presenting in groups rather than couples, and just this year, two winners were crowned with no differentiation of gender.

“We hope this will enable all ranges of gender expression and we appreciate any feedback that can help us keep Los Altos progressive and inclusive to all,” current ASB President senior Divya Jakatdar said.

Our Question to You:

Major public schools such as Gunn and Paly have removed Homecoming and Homecoming Court from its spirit week tradition and only focus on the rally and activities.

After seeing the history of Homecoming at Los Altos, do you think this is this a tradition Los Altos should continue? Let us know on lahstalon.org or send a letter to our editor.