The Eagles soar to a win to end the football season 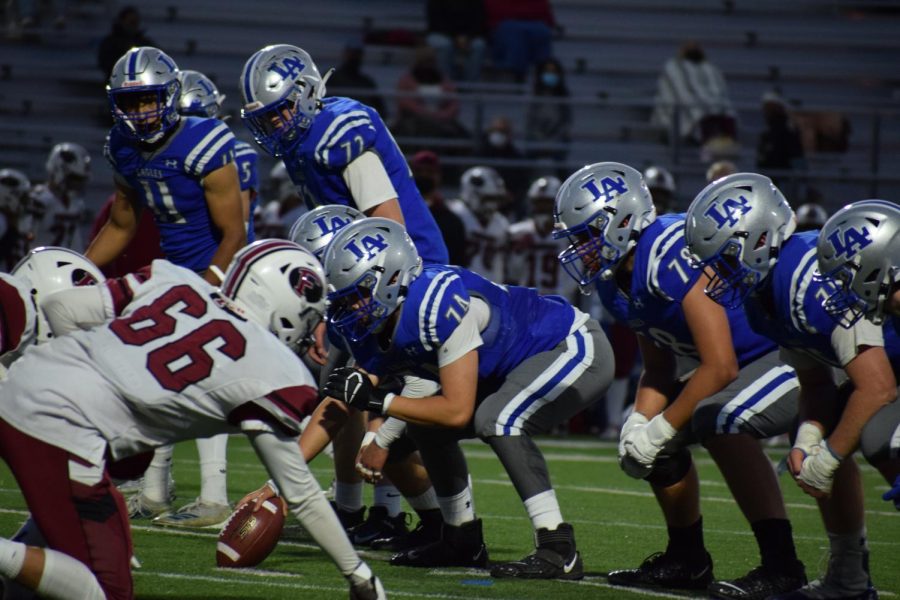 The varsity football team prepares to snap the ball near the end of their last game. It was a close finish, but the Eagles ultimately came out on top with a score of 21–14.

The varsity football team closed their season with a win against the Fremont High School Firebirds last night, leading to a 2–3 record for the season. It was a close finish, but the Eagles ultimately came out on top with a score of 21–14.

The Eagles scored first after they stopped the Firebirds at the Eagles’ 10-yard line, going the remaining 90 yards for a touchdown. However, the Firebirds were quick to return the score, leading the game to a 7–7 tie at half time.

“The last couple games, we have fallen behind right out of the gate and had to try and power our way back in without success,” wide receiver junior Cole Rafferty said. “We fired right off the bat and got to defend the lead for most of the game this time.”

As soon as the Firebirds kicked off to start the second half, the Eagles got straight to work. Three minutes later, Cole completed a pass from quarterback junior Mingaang Park, turning to run the rest of the way for a touchdown. This put the Eagles at an advantage with a 14–7 score after a completed extra point.

“When I scored, I was completely gassed,” Cole said. “But I needed to find my family to celebrate — and by family, I mean team.”

After a series of strong defensive plays, the Eagles then forced the Firebirds to punt on a fourth down, leading to a long return by wide receiver sophomore Zach Fagin to the Firebirds’ 39-yard line. On fourth down and 7 yards to go, Cole took it upon himself to push the Eagles forward, stretching for a first down.

“Injuries happen in football and we have become accustomed to having a short memory, playing our *sses off and worrying about them later,” Cole said when asked about how this injury affected the team’s mentality.

A personal foul against the Eagles resulted in a 15-yard penalty, but Dre was able to complete passes to Zach and wide receiver sophomore Thomas Shuman, leading the team to third and 7.

After two back-to-back completions, the stands were alight with spectator support and cheers.

Stepping into his new leadership role, Dre called out the next play to his teammates. From center field, he threw the football towards the far left corner of the endzone to a running Zach…touchdown!

Kicker junior Josh de Shutter made the extra point, closing the third quarter with a 21–7 score.

The Firebirds did return score during the beginning of the fourth quarter. While Eagles rallied to match, they weren’t able to execute for a touchdown, leaving the score at a tense 21–14.

A flag and holding call against the Eagles led the team back to their own endzone. On the next play, due to taunting the other team, the Eagles earned a flag for unsportsmanlike conduct. The Eagles were now held within their own 10-yard line on third down and 40.

The Firebirds tackled Dre at the Eagle’s 1-yard line, just short of a safety, which led the Eagles to punt on fourth down.

With just under three minutes left in the game, the Firebirds set up around the Eagle’s 30-yard line. A completed touchdown by the Firebirds would lead to a tie game.

“In this moment right here, we had to put all seven months of work into three minutes of play and give everything we had left,” Cole said.

The crowd was silent. The air was crisp. The lights shined bright to contrast the dark night sky. Everyone held their breath. If the Eagles managed a stop, they would win the game.

As Fremont attempted to run the ball, a monster tackle from left back senior David Arista came out of nowhere, throwing the Firebirds’ player to the ground.

With 1 minute and 30 seconds left on the clock and the ball in their possession, the Eagles knelt to secure their victory.

“Effort wise, off the charts,” head coach Dave DeGeronimo said. “These guys really care about the game and they want to do well. We are a young team, with many sophomores in key positions, and so one thing I tell the guys is that it’s about getting better every week. I think they did that.”

The Eagles played a few tough teams throughout their season this year, and although it wasn’t a traditional season, Cole thinks that the team managed to hold it together and come out on top.

“The team played exactly how we know we can play every game,” Cole said. “It just took a couple games to get there.”