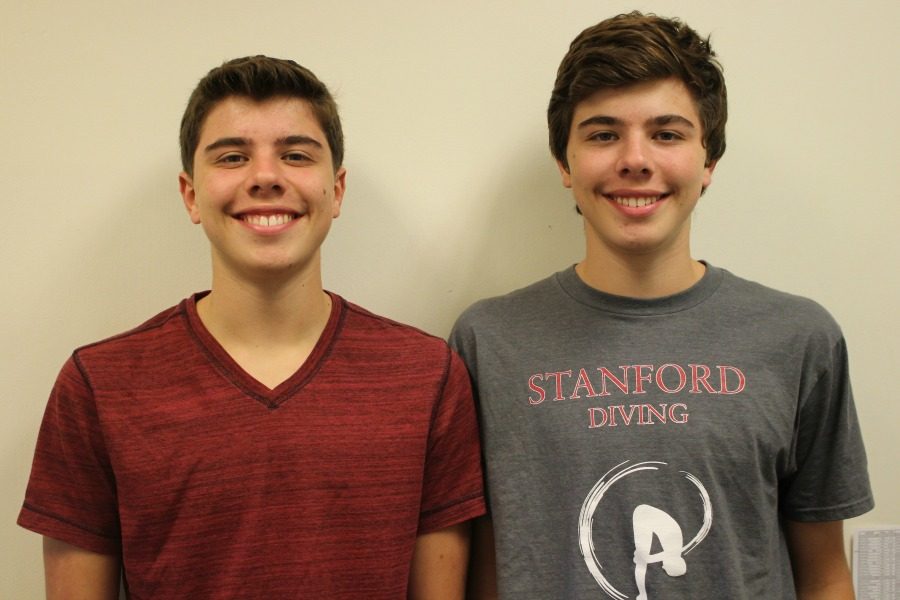 Ten meters in the air, junior Trevor Labuda takes a breath before launching himself off the diving board and somersaulting three and a half times to land without a splash in the swimming pool below. Following suit but on a three-meter board, his twin Evan Labuda mirrors the same routine. Both receive thunderous applause and scores of 9 out of 10 from the judges, qualifying them for Nationals.

For the twins, getting to Nationals for junior diving required more than just hours of practice and commitment; it required the ability to overcome both physical injuries and mental barriers.

At age 5, Evan and Trevor started diving lessons. Originally participating in swim classes at a local country club, the diving team caught their eye. They joined the Stanford junior dive team when they were 9 years old and have steadily progressed from there.

Most of the major diving competitions, like States or Nationals, are during summer, but the two also attend invitationals during the winter. When they were 11 years old, they traveled to Canada for their first international meet to compete against divers from Mexico, Canada, China and Germany. At the tournament, Trevor and Evan competed against some of the most experienced junior divers in the world, a level of competition they had not experienced yet, and walked away with an important lesson.

“I got last twice for my first two boards out of three, [and] it was an eye-opener of how good people my age were,” Trevor said. “On my third board, I came back strong and got third to last, and that was a pretty big victory. I remember walking back to the locker room and seeing the kid that got last crying. I talked to him, and we kind of just figured that it’s okay to lose.”

Overcoming roadblocks has always been an important contributor to the success of the twins. For instance, due to a torn ligament and strained back, Evan couldn’t compete for a year in 2014. When he returned to the dive team, he was discouraged by how much everyone else had seemingly improved and by his own lack of success.

“When I came back I hadn’t improved, but everybody else had had six months to get better so I was disadvantaged,” Evan said. “I had to relearn everything because I hadn’t been working [for] in a long time… It took awhile to get my confidence back while diving.”

Along with physical injuries, the twins also face mental roadblocks when diving. If they execute one move incorrectly, it means that their scores are lowered. To cope with mental barriers, Trevor has learned to resist the all-too-human temptation to procrastinate on what’s stressful.

“I know I’m going to dive eventually,” Trevor said. “And if I’m going to do the dive I might as well just go now and not wait 10 minutes [on the board] because I’m scared.”

On the other hand, Evan deals with mental blocks by having faith in his coach and trusting that he himself can do it.

“I know my coach wouldn’t have me try [a new dive] if he didn’t think I was ready,” Evan said. “The first time I tried [a new dive] I completely belly-flopped, but my coach told me to go back up and try it again because he knew that I could do it. I trusted him and told myself that I could do it if he said I could, so I [tried again] and it went well.”

To Trevor and Evan, being a good diver is about more than skill and form — it’s about about the ability to overcome obstacles in their path. While diving requires sacrifices of time and puts Evan and Trevor at risk of injuries, the two hope to continue to dive in the near and far future. To both, diving offers a space to clear their mind and focus on a sport they love.

“[Diving] has become comfortable for me,” Trevor said. “It’s just a way for me to clear my mind and focus on one thing. There’s nothing like that feeling of going into the water.”