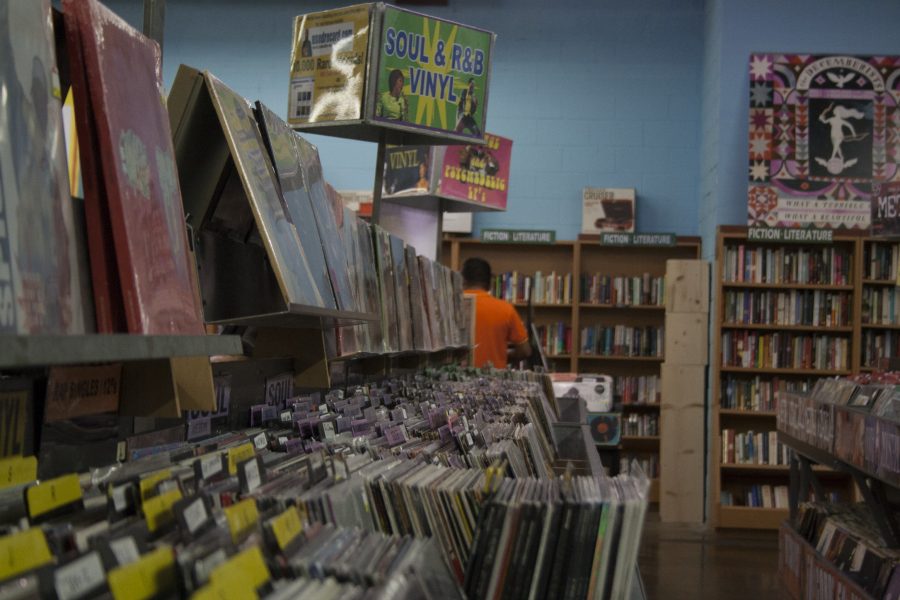 By Michael Sieffert and Yalda Khodadad

For much of the 20th century, it was perfectly normal to spend a Sunday afternoon in a record store, wading through alleys of vinyls and trying out new albums. Vinyls were hailed as one of the most popular means of listening to music at home, and the post-war boom of the 1950’s ensured that the format would continue dominating the market for a long time. Now, with music at its most attainable, the thought of leaving the house to find new music is laughable. Free music streaming companies such as Spotify, Pandora and their competitors have eliminated the need to buy music at all, and as far as most listeners are concerned, vinyl is a dead format.

However, sound quality, physical charm, and the experience in general is what is keeping vinyl alive today.

Some listeners prefer the unique sound of music on vinyl. While records can’t hold as much information as a CD, the manner in which music is pressed into vinyl — grooves etched on the vinyl’s surface transfer the correct wavelengths to a record player’s needle — allows for distortions that create a unique quality often referred to as “warmth.” On vinyl, bass sounds softer, the mid-range is crisp and the scratches and pops that emerge with use add character to a record.

“I think people that grew up with CDs, and are hearing vinyl, are kind of amazed it can sound so good, because of the thought that CDs are superior, and [vinyls] just have a dull tone,” vinyl dealer Don Nourie said. “I thought records have always been superior.”

In some respects, vinyls do carry greater sound quality. While music is frequently refined to be as loud as possible for releases on CDs, vinyls, which cater to a more sound-specific consumer base, are mastered to retain more range between their sounds.

But for many listeners, MP3s have been the norm for as long as they’ve been alive.

“For our store, [Rasputin,] I’m going to have to say, unfortunately, [our clientele is] middle-aged to older [people]… [Younger] people are listening to mp3 and they’re really just glued to the phone,” Nourie said.

However, it would be a stretch to say that interest in vinyl is re- stricted to the middle-aged. For the industry as a whole, it’s been shown that a majority of buyers average under 35.

This is partly due to the vibrant nature of the community as a whole, which has allowed it to attract younger members such as Los Altos high school senior Alan Ryder, who is currently enrolled in Foothill’s middle college program.

“There’s a culture,” Alan said. “[There are] other people that listen to different music, but you both have a common interest in preserving vinyl. It brings people together. My dad… he’d see people working at record stores that he’d never go up to… and be like, ‘Hey pal, what’s going on?’, but he’s learned that [people] have a passion for the same thing… you can learn about life through other people’s perspectives.”

Another factor that draws people to records is their physical charm. Having an album with unique artwork can be a major selling point. A collector can have hundreds of records and sit among their shelves as they listen to the album of their choice. The motions of selecting a vinyl, blowing the dust off of its familiar cover, carefully placing the needle where they want it and letting it play give many listeners a feeling of attachment to their records. Buying them is a commitment one does not have to make when streaming playlists on Spotify.

For all of the patience and time vinyl requires, users are handsomely rewarded.

“[There is an] experience of taking out what you’re going to listen to, and selecting it, and placing it. If you don’t want to just start at the beginning… you have to choose to move it to the other song,” Alan said. “You have to [put the needle] right on there… there’s a certain kind of pride.”

The problem is, small percentages of people fail to make an impact on the larger scale of things. Recently, Rasputin closed their location in Mountain View, due to bad sales. Like the closing of other large names in the record business, the closing could be seen as symbolic of the death of vinyl in general.

But is this really the end for our beloved plastic friend? Probably not. Although it has shrunk substantially, the vinyl community has not really gone away. There will always be people looking for their new “grail record” to spin at 33 1⁄2 revolutions per minute. We may never see vinyl return to its former dominance, but it isn’t impossible to imagine that they will be coveted for decades to come.