‘The communication has not been there’: MVLA Board candidates discuss goals at webinar 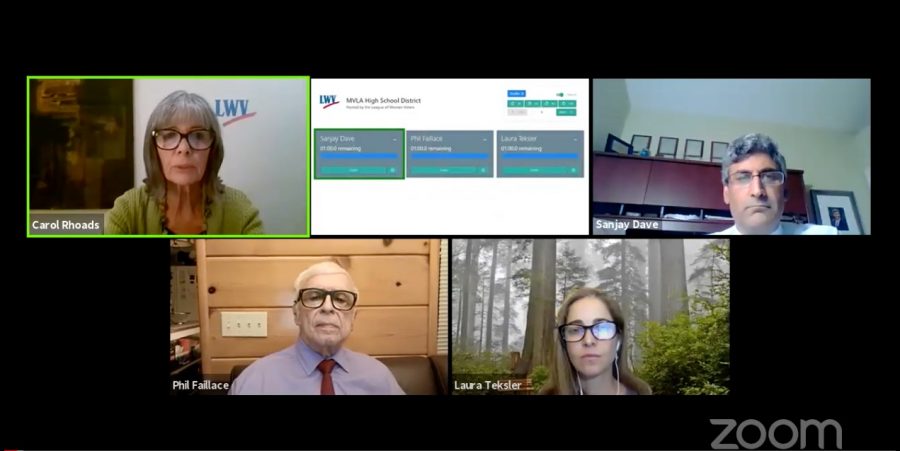 Via the Los Altos–Mountain View League of Women's Voters

The Los Altos–Mountain View League of Women’s Voters hosted a forum for the three MVLA Board candidates.

The three Mountain View–Los Altos Board candidates in this year’s election discussed distance learning, systemic racism in schools and student mental health at a webinar hosted by the Los Altos–Mountain View League of Women’s Voters yesterday at 7 p.m.

Incumbents Dr. Phil Faillace and Sanjay Dave as well as challenger Laura Teksler are running for two seats in the upcoming election. Candidates were asked a total of 11 questions, condensed by The Talon into the following topics: challenges, stakeholders, systemic racism, distance learning and mental health.

Candidates were asked to identify the greatest challenges the District will face for the next two years.

Dave responded by saying that his highest property is building a robust and high-quality distance learning program. He also suggested the District needs to prepare a plan for future pandemics.

Faillace emphasized the threat of the coronavirus on learning, proposing a “rapid-response system, which identifies learning loss and social problems as they occur.”

Teksler said she believes mental health is the District’s main priority because of isolation from distance learning and pre-quarantine trends — she noted that this time last year, there were increased referrals to CHAC counselling.

Candidates were asked how they would ensure stakeholders — students, parents and staff — are involved in District-level decision-making.

Faillace acknowledged that the District has “not done a good job recently,” and suggested applying the District’s approach to the field lights issue, which involved forming focused subgroups with leaders of different involved parties.

Dave said stakeholders need to be “involved early and often.” He emphasized collaboration, recalling his work with psychologists and teachers while developing the late-start bell schedule.

“From a parent perspective, the communication has not been there,” Teksler said.

She stressed the need for town halls between the Board and parents as well as more community conversation.

“There need to be a lot more opportunities for families to be informed and participate that aren’t just in the middle of a five-hour Board meeting,” Teksler said.

On the topic of systemic racism, all three candidates expressed interest in looking deeper into a recent petition demanding the removal of SROs on campus and the addition of a mandatory ethnic studies course.

“The ethnic studies course is an opportunity to build an inclusive program that makes everybody feel welcome at school,” Faillace said. “That is the opportunity that must be seized. It must not become a platform for a particular ideology that divides us.”

At the October 5 Board meeting, multiple speakers raised concerns that an ethnic studies class would do more to divide the community than encourage inclusivity.

Teksler believed the petition was a “good place to start” with “a clear set of asks” and was open to having conversations about whether or not SROs are actually supportive of students.

Faillace emphasized that the petition was not the impetus for discussing racial equity.

“We’ve been rooting out racism in our curriculum for many years,” he said, citing regular reviews of curriculum.

Dave agreed with Faillace, highlighting the District’s work in ensuring racial equity through implicit bias training and the creation of an equity committee.

All three have previously expressed strong support for an ethnic studies program. The candidates did not express as concrete views on the topic of SROs, however. Dave indicated that he does not support SROs, implying that he would like to remove them from campuses; Teksler said that she would like to reconsider SROs given the allegations of past abuse; and Faillace suggested reforming rather than removing or replacing SROs.

Candidates were asked how the effectiveness of distance learning was being measured and what changes they felt should be enacted.

Teksler pointed out that there remain significant challenges with technology and that distance learning “cannot measure up” to in-person instruction.

Faillace said that the District hasn’t established sufficient metrics to gauge success with distance learning, and suggested implementing quarterly reports as well as a redesigned report card that better communicates student engagement. He emphasized the need for designing a remediation plan and urged the District to fund additional resources and bring in more experts to take the pressure off teachers.

Teksler said the District’s support for students with existing mental health challenges is “good,” but that the culture of the school itself is creating the problem in the first place.

“In the past couple years we’ve been emphasizing an academic level of achievement that is not sustainable for their mental health,” Teksler said. “We need to start thinking about what an appropriate number of AP courses is for a student’s workload.”

Faillace believes the District’s student support system is strong, citing the District’s construction of mental health facilities, increased CHAC support and the hiring of a wellness director and social worker.

Dave agreed with Faillace that the District has “made great improvements in wellness” but stressed the importance of continuing to improve. He said he was open to looking at limiting the number of APs a student could take as a method of decreasing stress.