The Commodification of a Culture: Punk Fashion Goes Mainstream 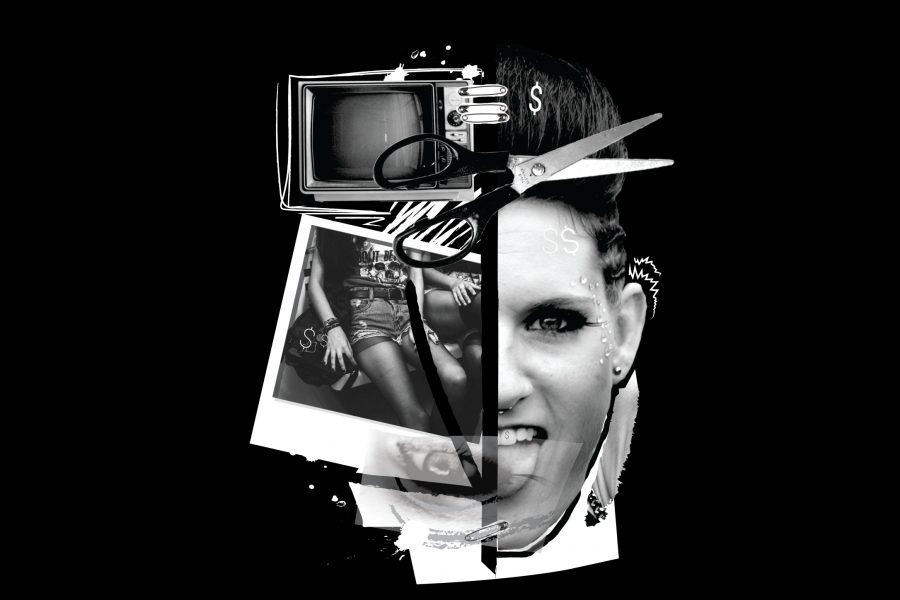 By Julia Santos and Cameron Avery

The idea of punk first emerged in Great Britain during the 1970’s as a political movement. It was a way for people to rebel against the upper class through artistic self-expression. These “punks” appropriated traditional symbols of the British elites, such as the Union Jack and the tartan plaid of Queen Elizabeth II.

As the movement found its way across the Atlantic to the U.S., the American punks incorporated these elements — the anti-establishment ideals of British punk — into a movement that could be characterized as decidedly more artistic in nature when compared to their British counterparts. While British punks wore bright colors, the American style was distinctly absent of color: it was broader, more about self-expression and characterized by a pervading darkness that clearly contrasted with the societal norms of the time.

The deconstruction of clothing — hand-ripped jeans, bleach-stained t-shirts, studded leather jackets — served as a microcosm of the goals of the movement itself: by literally destroying their clothing, the punks were simultaneously breaking down societal norms and conventional mainstream thought.

From nearly the beginning of the movement itself, punk culture would find itself paired with an unlikely ally: high fashion. In particular, two creatives — Vivienne Westwood and Malcolm McLaren — would come to elevate it, introducing aesthetics in a way that aimed to capture the emotions of punk music.

McLaren could be considered among those who conceptualized the punk movement, realizing that a new subculture could be birthed from the growing tide of frustration mounting in his native Britain. With his and Westwood’s role in the creation of the Sex Pistols, the first punk band to enter the scene — McLaren was their manager and Westwood defined their visual style — the symbiotic relationship between musicians and designers was one that existed from punk’s birth.

Westwood and McLaren could be called the originators of the “punk uniform,” the signature elements — ripped jeans, for example — that would define punk’s visual style. Their clothes represented the very spirit of punk: disruptive, aggressive and authentic to its aesthetic, they payed homage to the movement in a way that would advance it beyond its roots, catapulting it into the world of high art. From the Sex Pistols, outfitted in Westwood’s clothes, the archetype for punk fashion was established.

One Westwood signature was the graphic t-shirt: printed with controversial, subversive designs they would serve to transform those who wore them into symbols of rebellion. One particularly notorious shirt featured the word “Destroy” atop a prominent red Swastika (the co-opting of traditional symbols of oppression featured heavily in her designs). Other staples included artfully shredded pants and shirts, safety pin-studded jackets and lopsided, oversized sweaters.

Rather than resorting to derivative appropriation of the culture, the designs were imbued with reverence for it — inspired by the style and ideals of original punks, they looked to preserve the punk philosophy through their own artistic interpretations of their rebellious spirit. This same spirit was literally woven into the fabric of Westwood’s clothing: like those who inspired her, her clothes were imbibed with a rawness that felt thoroughly “real.”

The ideals of punk weren’t merely appreciated by Westwood and her contemporaries. Instead, by taking cues from it, it was condensed and elevated to meaningful, lasting art.

Without the contributions of Westwood and McLaren, it’s unlikely that punk, as both a cultural and artistic period, would have preserved the same timelessness and influence that it currently has. Long after the movement itself had fizzled out, artists would continue to draw influence from its emotions and sentiments, spurred by the seeds planted by McLaren and Westwood.

Today, multi-million dollar companies such as Urban Outfitters and Forever21 are selling their version of “punk” to a wide audience. Those who seek the “punk aesthetic” can easily walk into a store or hop online to purchase shirts with faux-insightful slogans, leather jackets. or distressed and ripped clothing — the options are endless.

While clothing was essential to the punk movement, the movement itself was aimed to support and promote anti-establishment and anti-conventional means of self expression. Although it may seem as if these clothing companies are paying homage to a late movement, they are actually degrading the punk philosophy. By mass producing “punk” clothing, companies fail to capture the true spirit of punk, which used DIY and handmade clothing to subvert the traditions of commercial society.

The true meaning of punk has been undermined by the sales of inauthentic clothing created without the purpose of challenging and defying societal norms. Brands that hijack punk imagery without respect for its values threaten the vitality of the culture, inviting consumers to partake in the aesthetic without the ideas behind it.

Punk originated as an “outsider” movement of rebellion, where a subjugated lower class was pitted against repressive elites. In a way, these fast-fashion brands represent the very antithesis of punk, whose anti-establishment original intentions are at odds with the profit-driven, diluted form typified by the mall outlets that copy them. And the aggressive, no-holds-barred attitude of the original punk movement seems to be somewhat missing. To note: today’s consumers of punk fashion aren’t exactly burning flags, shaving their heads or smashing guitars.

“If you ever say ‘I used to be punk’ then you never really were,” John Patrick Logan said in an article from The Guardian. “Punk is a mindset, a way you think and live, so you either are a punk or you are not! It is not just a ‘phase’ you go through.”